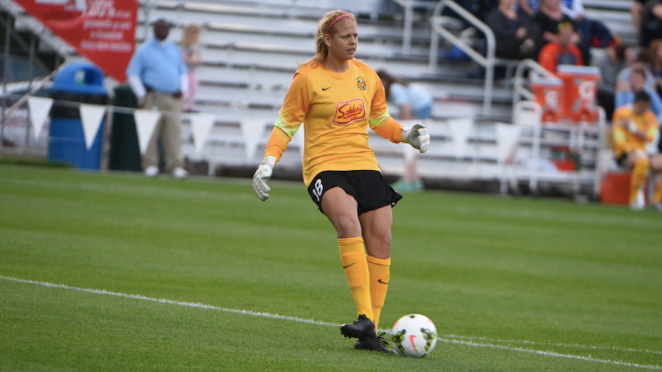 The Flash announced on Friday that Chantel Jones has retired from professional soccer. The Equalizer’s Dan Lauletta reported last week that Jones was unlikely to play for the team in 2016.

“Chantel has been a fantastic ambassador for women’s soccer and great mentor for the Flash. It was a pleasure working with her last season,” Flash Goalkeeper Coach Daniel Clitnovici said in the announcement.

Jones, 27, graduated from Virginia in 2012 and spent her first professional season in Iceland. She returned to the Mid-Atlantic when NWSL launched, signing with the Washington Spirit as Ashlyn Harris’s backup. In two seasons in Washington, Jones made nine appearances, posting a 1-7-1 record with a shutout. In November 2014 she was traded to the Flash for Kelsey Wys.

Jones played the majority of the minutes for the Flash last season, starting 12 of the 13 matches in which she appeared. Her season finished with a 4-4-5 record and two shutouts. Jones also spent offseasons in Australia playing for Perth and Caberra.

“I want to thank the Flash organization for giving me a chance and believing in me, and, I also want to thank the Flash fans for welcoming me as if I had played for the club for years,” Jones said. “I really appreciate everything this organization has done for me and wish them nothing but the best for the future. Throughout my soccer career, I have experienced a lot of amazing things and met some inspiring and incredible people that I will cherish forever. While this is an end to a big chapter in my life, I am excited to begin this new chapter and to see what the future holds.”

The retirement of Jones leaves the Flash with two rostered goalkeepers. Sabrina D’Angelo made seven starts as a rookie in 2015. Britt Eckerstrom was taken No. 26 in last week’s draft making her the first goalkeeper to have her name called.