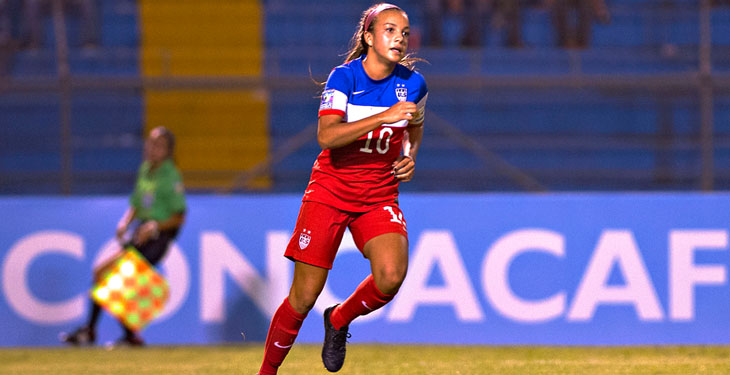 Mallory Pugh will not turn professional in the NWSL with Portland Thorns FC, according to her father, who says Pugh will attend UCLA in the fall. (Photo: CONCACAF)

Mallory Pugh will not skip college for the National Women’s Soccer League, her father says.

In an interview with the Denver Post, Horace Pugh admits that his 17-year-old daughter thought about turning professional and foregoing her college eligibility, but ultimately decided to attend UCLA as planned.

“We did look at her possibly going pro,” Horace Pugh told The Denver Post. “It’s all over the Internet she’s going to play professionally. It was very close to happening, but her gut feeling was that she wanted to go to college.”

On Friday, the NWSL announced a new rankings system to fairly distribute allocated players. Portland Thorns FC then traded the No. 3 pick in the draft to the Boston Breakers to move up to No. 1 in the rankings selection. Almost immediately after doing so, it was reported that Pugh had decided to skip college and turn professional to play for Portland. Lindsey Horan, now a member of the Thorns, is the only female U.S. player to have done so when she skipped out on a scholarship to North Carolina to sign with PSG in 2012. No player has ever skipped college to go straight to the NWSL.

Horace Pugh’s comments to the Denver Post sound pretty definitive. But a source with knowledge of the situation tells The Equalizer that as of last week, it was a “done deal” that Pugh would turn professional. That is ultimately why Portland traded up in the allocation rankings process — to get Pugh. It’s unclear what, but based on the surprise from folks around the league, but something changed in the past few days.

“People made speculation out of Portland getting rid of this draft pick to be in the position to take the first allocated player, who would have been Mallory,” Horace Pugh told the Denver Post. “People in the industry put two and two together, but nothing formally was out there. We never talked to (Portland) coaches, general manger, organization or anyone.”

Even if there wasn’t direct contact with Portland, U.S. Soccer would have been the ones signing paying Pugh — not Portland — as a subsidized player. SoccerWire.com’s Charles Boehm reports that compensation for Pugh would have been in the range of $200,000, with Nike and U.S. Soccer sharing the bill.

Regardless of Pugh’s decision, the Thorns remain atop the new allocation rankings, meaning they have first rights to any newly allocated national team player or any player which gets dropped from her country’s allocation system but remains in the league on a standard player contract.

As a 16-year-old in 2014, Pugh played in all four matches for the U.S. at the U-20 World Cup. She scored seven goals and four assists in five games at the CONCACAF U-20 Championship in December, captaining the U.S. team to the title. She is the 2014-15 Gatorade National Girls Soccer Player of the Year. She is currently in her first official camp with the U.S. senior team and could make her senior international debut on Saturday against Ireland if selected for the team.