Determined Daly ready to prove herself in NWSL 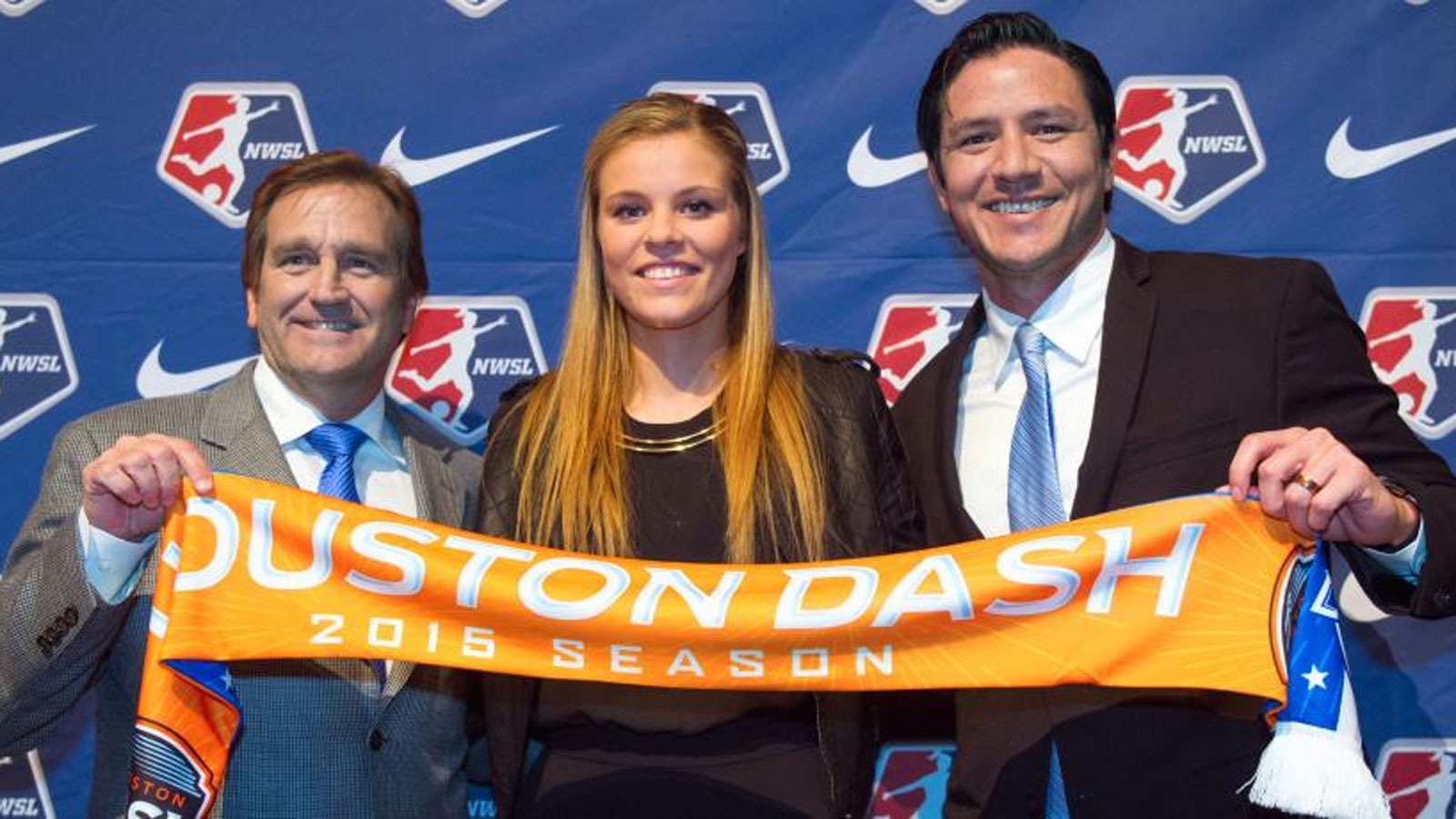 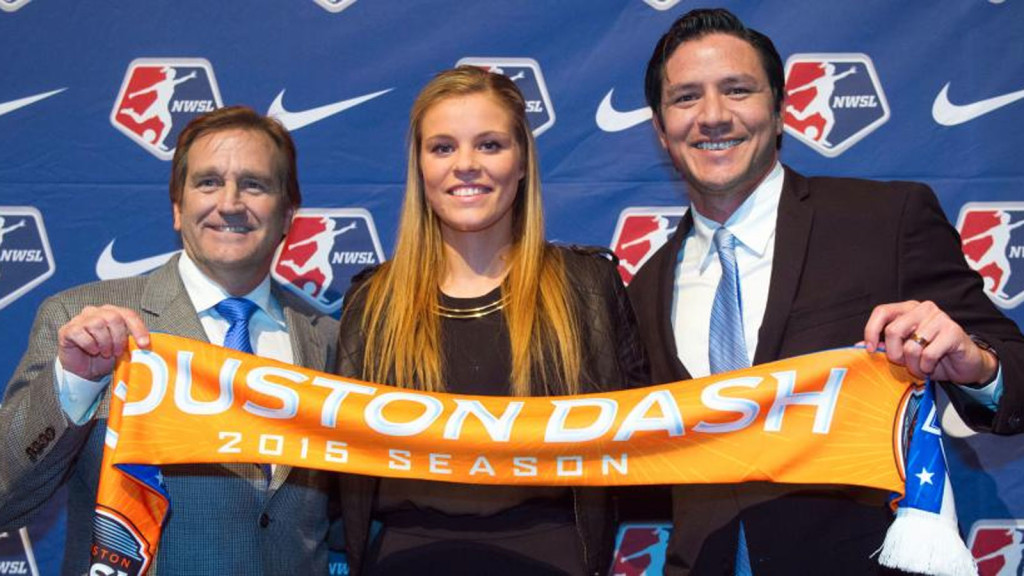 Rachel Daly looks to make an impact with the Houston Dash as the No. 6 overall draft pick. (Photo: NWSL)

BALTIMORE, Md. — Prior to Friday’s NWSL College Draft, there was speculation about how serious internationals who declared would be about continuing their careers in the United States. The selection of St. John’s forward Rachel Daly by the Houston Dash at No. 6 overall signaled that the prolific scorer really wants to stay on this side of the Atlantic.

For Daly, who confirmed as much, the decision of where to continue her career was difficult.

“It was a tough one,” she said. “It was up and down for several amount of months and towards the end of my college season, I just decided with the people that I respect that it was the right thing to do.”

In the end, Daly decided that she was ready for a different challenge, explaining that she previously played with and against many of the English players before coming to the United States. Daly now wants to test herself against the U.S. national team players and the players from other areas of the world that play their club soccer in the U.S.

This should come as no surprise to anyone who has seen all-time leading scorer for St. John’s play. Although she is known for her technical ability, she is also known as a player that doesn’t back down from a challenge.

[MORE: Waldrum says defender Roccaro too good to pass up despite injury]

Fittingly, when asked about Daly’s gritty nature, Houston Dash head coach Randy Waldrum admitted, “that’s the thing he loved about her.” Waldrum plans to use Daly as a target forward, a position that was open on his squad after Jess McDonald was traded away last week.

“She’s not afraid to get her head on a ball, or dive in a crowd, have contact with bodies, or collisions with goalkeepers,” Waldrum said. “She’s that ultimate competitor that you want in a forward. She’s got that kind of drive. Those were some of the intangibles we really liked about her as well.”

Daly’s college head coach, Ian Stone, has seen how fearless the 24-year-old forward is. “She’s going to put her head where other players aren’t going to put their feet.”

Obviously, the goals that Daly scores garner attention, but Stone noted that Daly is equally tenacious in the other penalty area. He called her a “revelation” when defending set pieces and coming in for challenges, adding that people who saw her compete couldn’t believe her play in the opposite part of the field.

Examining the story that brought Daly from a small town named Harrogate in England to Queens, N.Y., and now Houston, it’s revealed that challenges aren’t just something she wins on the field during games, but something she’s faced throughout her time in the United States.

Daly joined the Red Storm in 2012 but was unable to play due to NCAA regulations and had to sit on the sidelines. Not only is losing a year of eligibility a difficult prospect for any college athlete, but it also left Daly with less time to transition and have an impact on the college scene.

Stone and Daly, however, used the year to figure where to put the versatile player on the field to give her the best chance to shine. Stone feels that Daly, a left back with Lincoln Ladies and in the English youth system, can play any position on the field. He settled on using the two-footed player as a forward for his squad.

The following fall, Daly exploded onto the scene, tying for the lead nationwide for goals scored in the season with 23. Daly earned numerous awards in 2013 including Big East Offensive Player of the Year and second-team All-American honors.

While she tallied a respectable eight goals and two assists in her junior year, Daly couldn’t equal her the success of her first season on the field for St. John’s. The forward didn’t have the team around her that she had in her first year, and also broke her nose, which meant she had to wear a cumbersome mask. After scoring that many goals a season prior, she was also now on everyone’s radar. Daly was understandably frustrated but worked hard to improve her game. Stone felt that year helped mold her as a player and a person.

“It really allowed us to work on her being more of a complete forward, being better with her back to goal,” Stone said about Daly’s junior season. “I thought that although it didn’t always work out for her that season she was moving in the right direction which led to this senior year.”

[MORE: Sonnett drafted No. 1 overall to Portland  |  Rodriguez No. 2 to Sky Blue]

This past fall, Daly’s offensive production once again exploded. She scored 19 goals — nine of which were game-winners — in the process setting a new record for career goals (50) scored at St. John’s. Her efforts also earned her unanimous Big East Offensive Player of the Year honors.

Daly’s career at St. John’s drew comparisons to England’s biggest female star of all-time, Kelly Smith. Smith starred at another New York-area Big East school, Seton Hall. Much like her English compatriot would more than a decade and a half later, Smith earned 1st-team All-American awards in her senior season and set multiple school offensive records.

“Kelly Smith is my hero. She has been since I was a child,” Daly said when asked about the comparison. “I used to go watch her play all the time. She is an absolute phenomenal role model, phenomenal player, so to even be a quarter of what she is would be huge. To have that comparison means the world to me.”

Daly’s next challenge will begin in a few months. The Dash will begin training camp in March with the 2016 NWSL season set to begin in April.