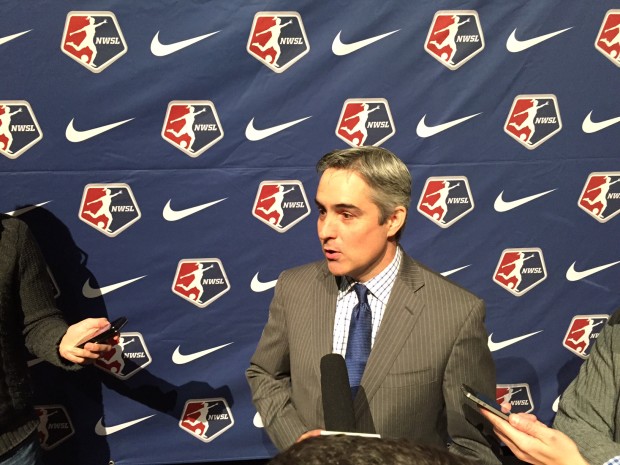 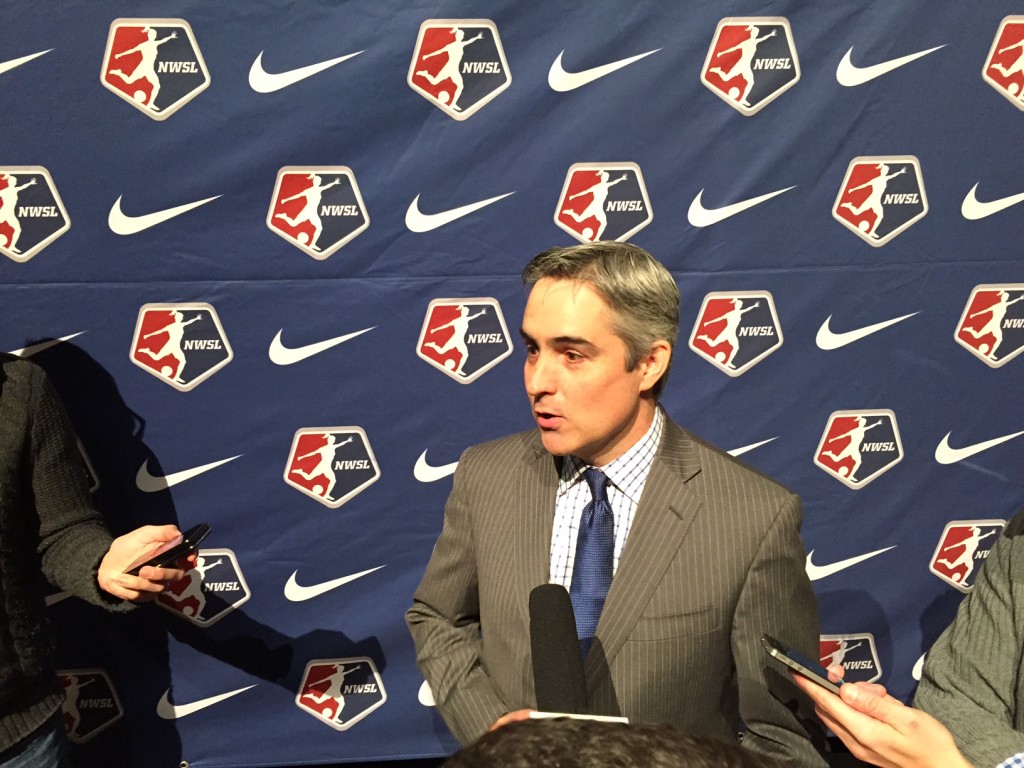 NWSL commissioner Jeff Plush is pleased with the new method of allocating subsidized players, a process meant to balance the playing field. (Photo Copyright Jeff Kassouf for The Equalizer)

Friday wasn’t just draft day for the National Women’s Soccer League — it was also the start of what will ostensibly be a fairer process to distribute allocated players.

And it started out with a bang.

The announcement of the new process delayed the start of the 2016 NWSL College Draft by over 15 minutes Friday morning in the grand ballroom at the Baltimore Convention Center, which fewer than 24 hours earlier hosted the MLS SuperDraft. And a few minutes later, Portland Thorns FC announced the acquisition of the No. 1 pick in the rankings from the Boston Breakers, who in return received the No. 3 overall pick in the 2016 College Draft.

Portland is expected to make a groundbreaking move with the selection priority and use it on 17-year-old Mallory Pugh, who is currently in camp with the senior U.S. women’s national team.

The new process, meant to “provide an equitable mechanism for distributing the rights to new Unattached Subsidized Individuals to teams in the league,” according to a league statement, resembles MLS’ method of distributing new players to the league. “USI” is the new term for players previously known as “allocated” — those whose salaries are paid by their federations and not by their NWSL teams.

Interestingly, the vague language of the new USI system leaves open the possibility of any federation around the world coming to the NWSL — or a team — and offering to pay a players’ salary in order for her to play in the league. Theoretically, this could even happen on a one-off basis for some countries, although that was not discussed on Friday.

NWSL commissioner Jeff Plush noted that the USI system will also be used for those who lose their federation-subsidized status and must re-enter the league under a standard player contract.

“There aren’t any other countries yet, although I would say we’ve had preliminary conversations with other federations and potential partners,” Plush said. “Certainly this could be a mechanism — every negotiation takes on its own life a little bit, but we’re excited to have a mechanism to allow for players to come into the league in a transparent way, and for players to stay in the league in a transparent way that might drop off allocation.”

Plush did acknowledge once again that the NWSL is in talks with Football Federation Australia, but that nothing is finalized.

“We’re still talking to Australia, for sure,” Plush said. “As you know, they’ve been great friends of ours and a lot of our players go down there in our offseason. The counter-seasonal nature of our two leagues makes it on a lot of levels a potential partner, but still very early, early conversations.”

The NWSL season operates roughly from mid-April to early October. The W-League in Australia runs from October through late January. International players declining to play in the NWSL have in the past mentioned that the season isn’t long enough and that it ends outside of transfer windows, leaving them dormant for too long. A formal partnership with Australia could solve this and help all players earn year-round livings and play 10-plus months per year, but the NWSL is also interested in extending the length of its own season.

In general, though, Plush & Co. see the news as exciting and needed.

“It’s the next iteration of where our league needs to go,” Plush said. “It creates a lot of things that I think people want out of an allocation process. It’s clarity, transparency, and a tracking order so you can understand what’s going to happen. It creates an asset for a situation where if a player doesn’t want to go to a certain market, at least a team doesn’t come out of that with nothing. So, it’s the right time, it’s the next step in our evolution.”

Below is the process for teams obtaining players through the USI system, along with the updated priority ranking following Friday’s trade (words directly from NWSL statement):

USIs will be made available for selection by Teams after the NWSL is notified by a Federation that a USI is available for allocation.

The Allocation Ranking Order will be determined by the reverse order of finish of the prior NWSL season, taking playoff performance into account. The final ranking spot(s) will be provided to the Expansion Team(s).

The complete text of the Allocation Process will be made available on the NWSL website prior to the start of the season.