Sonnett ready for pressure as top pick in Portland 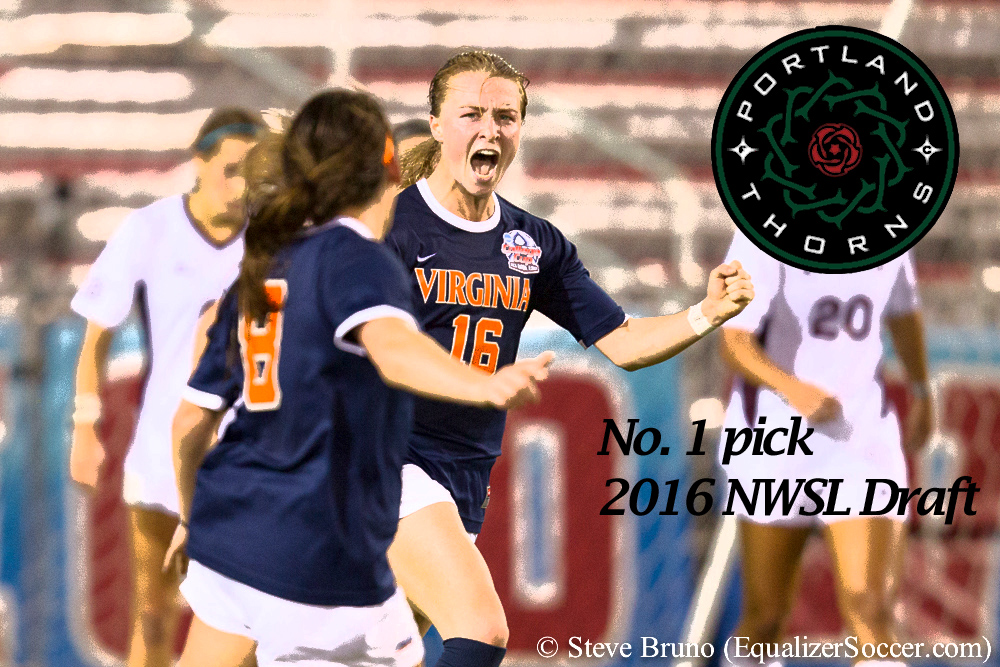 Sonnett was long expected to be the No. 1 pick in the 2016 NWSL College Draft, as Portland had teased the pick for months. She said on Friday that she spoke with Thorns coach Mark Parsons — who was the head coach of the Washington Spirit last season, one of several which Sonnett played for the Spirit Reserves — on and off throughout the fall but that she knew for sure while watching the webstream of the NWSL College Draft on Friday morning.

Sonnett joins a Portland team seemingly getting richer by the day. She is the fourth U.S. Soccer-subsidized player on the Thorns, joining Tobin Heath, recently acquired Meghan Klingenberg and newly acquired Lindsey Horan. The Thorns are also close to signing French midfielder and 2015 World Cup Silver Ball winner Amandine Henry, and the Thorns started out their Friday by adding Danish striker Nadia Nadim in a trade with Sky Blue FC. They are also reportedly on the verge of making a groundbreaking acquisition of 17-year-old U.S. international Mallory Pugh.

With all of that — and a world-leading attendance of over 15,000 fans per game in a soccer-mad city — comes pressure. But Sonnett has had time to adapt to pressure this fall, debuting for the senior U.S. national team and playing 90 minutes in a 3-1 win over Brazil on Oct. 25, which is no soft introduction to the international scene.

“In terms of pressure and wanting to perform well, I think being with the national team these past couple of months and playing with Meghan Klingenberg and playing with Tobin Heath, kind of getting a taste of what kind of player and what kind of caliber they have, is really good for me,” Sonnett said via phone from U.S. training camp in Los Angeles, where she is attempting to make the Olympic qualifying roster. “I think just going into Portland with an open mind and doing whatever they need on the field, off the field, is going to be good. I’m super excited to go and start training.”

Portland acquired the No. 1 overall pick in the draft from 2016 expansion team Orlando Pride in a blockbuster trade in October which sent Alex Morgan to Orlando.

A self-described great communicator and organizer, Sonnett was a first-team All-American in 2015 and a MAC Hermann Trophy finalist. She was also the ACC defender of the Year. She ended her four-year career at Virginia with 11 goals and nine assists.

Sonnett becomes the second No. 1 overall pick from Virginia in four NWSL college drafts. Her former teammate and current United States teammate Morgan Brian, who plays for the Houston Dash, was selected No. 1 overall in 2015.

“I think Steve Swanson and the rest of the coaching staff continue to do a wonderful job of recruiting players that want to continue to get better,” “Just having that training environment throughout the years…having those players surrounding me and having the coaches to get those players there, I think is the biggest thing to help me develop and to help tyhe different players going past college to play professionally.”

Brian was the first person Sonnett saw on Friday morning after Sonnett got official word that she was the No. 1 pick by Portland. Brian has served as something of a quiet mentor to Sonnett, having cone through the process a year ago.

“Just seeing her and how she’s developed in the league and with the women’s national team, I think actions speak louder than words,” Sonnett said of Brian. “Just seeing the way she’s developed, hopefully I’ll be able to follow in her footsteps to how good she’s gotten these past few years.”

Brian won a World Cup six months after being drafted No. 1. Similarly, Sonnett hopes she’ll be one of the 18 U.S. players fighting for a fourth straight Olympic gold medal for the country.