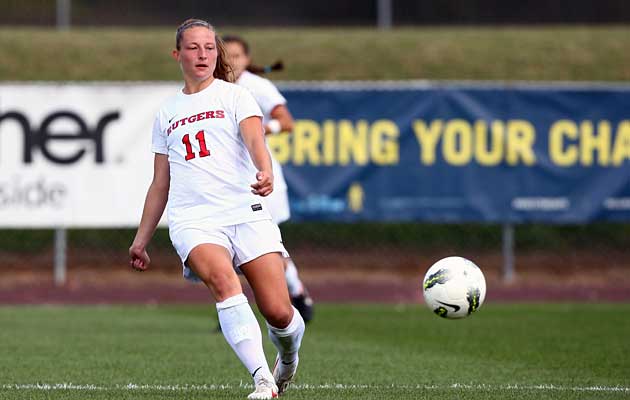 Rutgers defender Hayley Katkowski could be a steal in the later rounds. (Photo: Rutgers Athletics)

It’s been said almost ad nauseam that this draft class is weak. Although that’s true, it’s possible that if teams do their homework, they could find some gems in the later rounds that could make a splash in training camp.

First, be sure to check out our first-round mock draft and our position-by-position breakdown of the top talent in this draft class. Below is a look at a few of the players that could hear their names towards the end of Friday’s draft:

Raetzman would be a higher on the draft board if she were taller. The central midfielder comes in a 4-foot-11 but is good on the ball, scrappy and smart player. She was an important cog in the Wildcats’ Sweet 16 run in 2014. A two-time All-SEC honoree, including first-team honors in 2015, Raetzman is a technically sound player that could be a good pick from a team looking to add depth its midfield ranks. Raetzman is from the Chicago area so perhaps the Red Stars’ will pick her up in the second half of Friday’s draft.

Yes, that’s right, another center back prospect (we told you this draft was deep for those). While Raetzman is a victim of a lack of size, Fiebernitz is a victim of exhausting her eligibility at the wrong time. In another draft class with fewer center back prospects, Fiebernitz has a better chance of being drafted. Fiebernitz wins aerial battles and is an enforcer type center back, but what really stands up about Fiebernitz is her penchant for scoring goals. A great offensive threat on set pieces, she bagged 14 goals in her career and lead her team in scoring as a sophomore.

Zadrazil, an Austrian international, has two strikes against her – she’s an international, and she’s from a small conference, but she’s one the best mostly-unknown players in the draft. She’s a table-setter who is also capable of scoring. She has great vision, as evidenced by the fact she was last year’s active NCAA leader in assist per game. Last summer, she played an important role on the Washington Spirit Reserves team that won the final USL W-League championship. Due to the red flags mentioned earlier, she’s a long shot to be drafted but perhaps the Spirit will invite her into camp.

Captain of this fall’s Rutgers squad that went further than any team in Rutgers history, Katkowski does the thankless midfield work well. She started every game in her first four years as a Scarlet Knight, logging nearly 8,000 minutes in the process – averaging of over 88 minutes per game. In a league limited rosters, a player with that level of consistency and reliability is highly coveted. Also, a defensive midfielder from a team that made it to the College Cup and lead the nation in goals against average and shutouts.

Simpson, the American Athletic Conference’s 2015 Defender of the Year is a player teams could potentially target if willing to take a chance on a player from a non-power five conference. She anchored a Bulls’ backline that recorded 12 shutouts on the season. She has good size and is physical. A target on set pieces, Simpson scored four goals for the Bulls this fall. Although there’s a lot of depth at the center back position, Simpson has a lot of the attributes that make for good central defenders at the next level so perhaps a team takes a chance on her late in the draft.