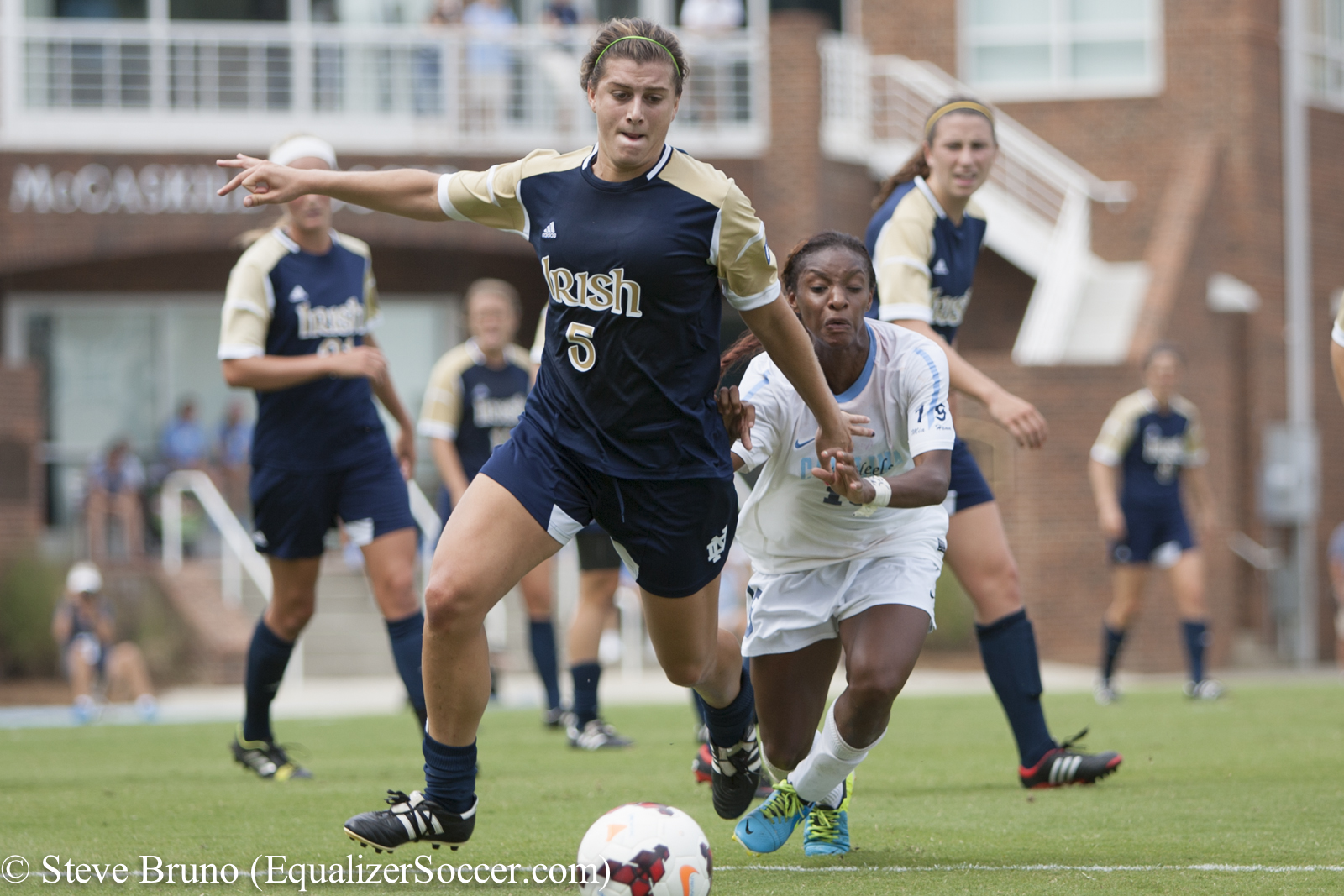 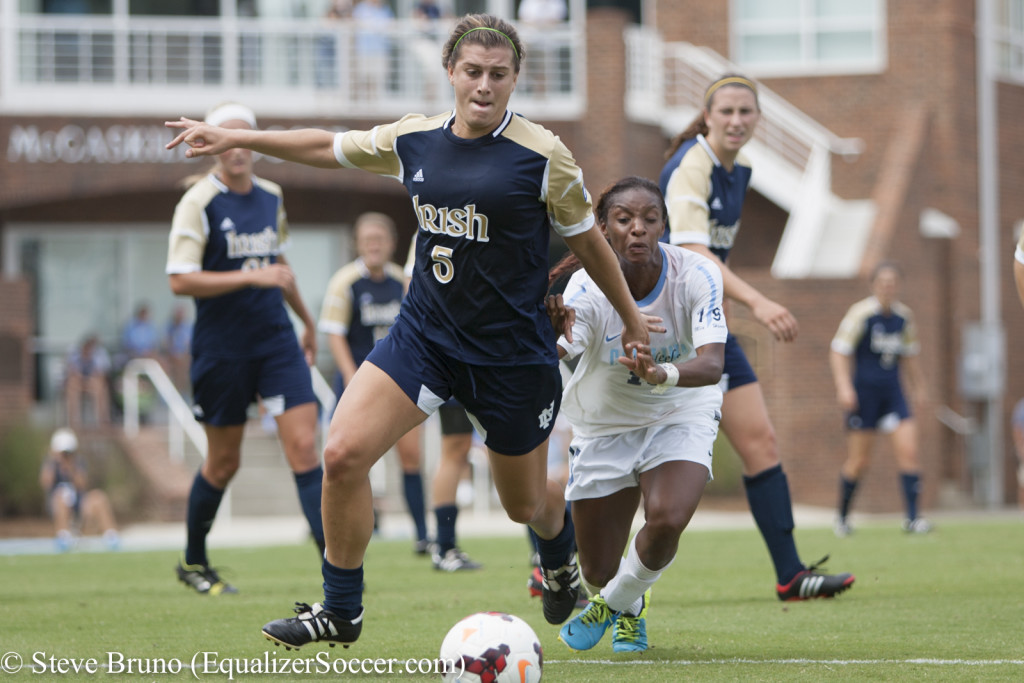 Cari Roccaro is one of several great center backs available in a draft extremely deep at the position. (Photo Copyright Steve Bruno for The Equalizer)

The 2015 NWSL College Draft class has a glut of center backs and then at most other positions the cupboard is just about bare. It will be interesting to see how teams navigate this year’s draft as they look to fill holes left by the recent expansion draft and other departures.

This draft also seems to have more question marks than any of the previous college drafts. Given the influx of highly-ranked internationals in the draft, do teams take a chance where in years past they’ve passed? How will all the off-season front-office movement impact the draft? How many players have declared only to keep their options open if a move overseas doesn’t pan out? It will be interesting to see how it all unfolds in Baltimore this Friday.

These are the top players to keep an eye on, by position:

Heading into draft day, there are more roster spots potentially open for rookie keepers then there were in last year’s draft. Smith and Luke have the best shot of hearing their names on draft day if the NWSL teams decide to fill their available spots through the college draft.

Abby Smith earned a camp invite from the full U.S. national team as a sophomore back in 2013 and is in the mix with the U-23 team. She was recently mentioned by Jill Ellis in an interview as a potential goalkeeper of the future of the U.S. national team. It’s hard to say how much statements like that factor into draft-day decisions, if at all, but Smith’s got a number of the physical tools that could be useful at the next level. Smith’s most noteworthy attribute is her incredibly strong leg. In fact, in the course of her career as a Longhorn, Smith tallied an incredible 3 goals. She also has great reflexes and shot stopping ability.

Lindsey Luke is probably a lesser known name than Smith, but the Utah product would also be a great selection for a team looking for a goalkeeper. Luke is the most decorated player in Utah history. She has great hands, makes plays in traffic and has phenomenal reaction time. Having been battled tested in one of the best conferences, Luke could soon find herself being tested at the next level.

What stands out about Britt Eckerstrom is a bit different than the first two on this list. Eckerstrom is a very vocal keeper, who organizes her back four very well. Her organization skills helped Penn State win the national championship in December as she commanded a backline composed entirely of underclassman throughout the tournament without allowing a single goal. While keeping things tidy tends to lose out to acrobatic saves during awards season, Eckerstrom may be worth a look for an NWSL team. Eckerstrom hails from Germantown, Md., and at one point suited up for the Washington Spirit forerunners D.C. United Women in the USL W-League. If she doesn’t earn a roster spot elsewhere, perhaps she’ll serve as the Spirit reserve keeper.

It’s no secret that Emily Sonnett will be not only the first defender off the board, but the first player selected, period, by Portland Thorns FC. Sonnett has all the characteristics necessary to be a great center back at the next level. Not only is she calm on the ball, but she’s got excellent speed and athleticism. Just behind Sonnett is Cari Roccaro, a versatile player from Notre Dame who settled in at center back for the Fighting Irish. Center back would probably be the best fit for Roccaro, although perhaps she’ll be taken as a defensive midfielder given the lack of depth at that position.

Brianne Reed is an undersized center back from Rutgers, where she helped anchor a backline that boasted 18 shutouts on the season and had the nation’s best goals against average. Her athleticism and 1v1 defending will make her one of the first defenders off the board despite her size. Katie Bowen is a player that’s played seemingly everywhere for North Carolina and her international experience will make her an appetizing selection despite the fact that she’ll take up an international spot. That is, if she is serious about playing in NWSL.

While there are plenty of center backs to go around in this draft, outside backs are scarce. Florida State’s Carson Pickett looks to be the first player off the board at this spot. Pickett can play either left back or at left outside midfielder. She’s solid defensively but it’s her left foot that really sets her apart. Left-footed players that can deliver a ball as well as Pickett can are exceedingly rare on this side of the Atlantic Ocean.

On the other flank, teams looking to shore up the right back spot will likely grab one of two prospects: either Laura Liedle from Stanford or Samantha Witteman from California. Laura Liedle, a highly touted recruit, had a solid if unremarkable career with the Cardinal. The speedster Witteman was something of a revelation for the Golden Bears this season. While she started at least one game in seven different positions last fall, her best was right back.

Anyone who watched the College Cup isn’t surprised to see Raquel Rodriguez at the top of this list. Always extremely talented, Rodriguez seemed to put it all together in 2015. She can play-make, she can score, she can defend but she also possesses a flair and creativity rarely seen in American-born players. If Rodriguez stays in the United States, she’ll not only be a huge boost to which NWSL team drafts her, but could quickly become one of the players to watch in the league. Whoever takes her will have no qualms about her taking an international roster spot.

Kinley McNicoll is another international but one of the best midfield options in this draft. Overshadowed at Wisconsin due to playing next to Rose Lavelle, McNicoll provides good service and is an excellent set-piece specialist, as evidenced by her expertly taken corner kick to win Wisconsin the Big Ten title in 2014. A Canadian native, McNicoll played left back at the Pan Ams and was captain for Canada’s 2014 U-20 World Cup team. McNicoll has the potential to be a regular for the Canadian team in the future.

Perhaps it’s cheating to list Christen Westphal as a midfielder after starting as a center back at Florida, but she didn’t play that position before entering Florida and it seems that she will likely head back to her central midfield roots in the professional ranks. Very comfortable on the ball and good at building out of the back, Westphal could play in some kind of deep playmaking role. Perhaps her best weapons are her ability to serve balls long distances on a platter and her set-piece taking ability. She finished her senior season tied fourth in the country in assists. That’s unheard of for a center back.

Christina Burkenroad, a midfielder from California State Fullerton, is an exception to the seeming correlation between small structure and technical skill. The tall forward is skillful and creative and formed one of the best college duos with forward Rebecca Wilson. Burkenroad had her best season this past fall, notching 10 goals and 10 assists as the Titans claimed their second straight Big West title. Burkenroad’s conversion rate was less than ideal, especially her sophomore and junior seasons. Can she make the transition from a smaller conference to professional ranks?

Florida State’s Michaela Hahn isn’t a flashy player but she was instrumental in FSU’s success these past three years. She played a pivotal role helping build the Seminoles attack as the ball went through her much of the time. Florida State plays a pro-friendly style and has a history of generating players who can successfully make the leap to the professional ranks.

While predicting how this year’s draft will turn out is difficult, it’s not difficult to figure out who will be the first forward of the board. She’s strong, fast, capable of deceiving defenders and also proficient at helping those around her bag goals. In sum, Makenzy Doniak is a menace. After two 20-goal seasons, her production was down due to injuries in 2015, but Doniak did round into form as Virginia reached postseason play. She scored both Cavaliers’ goals in the eventual loss to Florida State in the ACC final.

If Janine Beckie isn’t allocated by the Canadian national team, she’ll come off the board pretty quickly. The speedy U.S.-Canadian dual citizen will factor significantly into the future of the Canadian national team. The two-time All-American managed no less than 12 goals in any of her four seasons with Texas Tech. Teams looking to increase offensive production will definitely have Beckie on their draft board.

Cali Farquharson and Cheyna Williams are also forwards who should hear their names called fairly early on Friday. Both forwards have put up impressive numbers while playing in the most competitive conferences in the country, which obviously makes them attractive draft-day options. Farquharson, who is good at eluding defenders and has great technical skill, has had hamstring issues during her time at Arizona State, but if she can stay healthy she could be an impact player at the next level. Williams terrorized offenses in both the SEC and ACC with her blazing speed and agility.

Rachel Daly, an English international, became St. John’s leading scorer in just three seasons, registering 50 goals in that time. Daly generated some highlight-reel worthy goals while with the Red Storm, but she also did the gritty defensive work. While being a technical player, Daly doesn’t shy away from contact, which she will have to deal with in the sometimes physical NWSL. Daly was actually a left back prior to college and played there a couple of summers with the LA/Pali Blues; her versatility should also help her draft stock.

There are several players this year that would have a shot to be on the list above if not for injury issues. Given the lack of depth in this draft, these players are somewhat wild cards. Jannelle Flaws tied with Daly for most goals in 2013, but is a sixth-year senior who had two ACL tears prior to 2013 and suffered this past season from chronic plantar fasciitis. NWSL drafts in the past have shown teams to be unwilling to gamble on players with an extensive, serious injury history.

Tarheel Summer Green ended her somewhat disappointing career at North Carolina with an ACL tear in November and suffered from compartment syndrome — a painful condition in which pressure builds up in the body and impedes the flow of blood — the year before. Green has shown at times why she was such a highly ranked recruit (see her assist on Lindsey Horan’s goal against Brazil in the U-20 World Cup two years ago), but will she stay healthy and become more consistent?

Alexa Newfield, also a Tarheel, has had significant knee issues including two meniscus tears that forced her to ask for a sixth year. Newfield is incredibly talented and could be a great pickup for a team if she can stay healthy. She led the Tarheels in scoring this year despite playing less than 1,000 minutes.