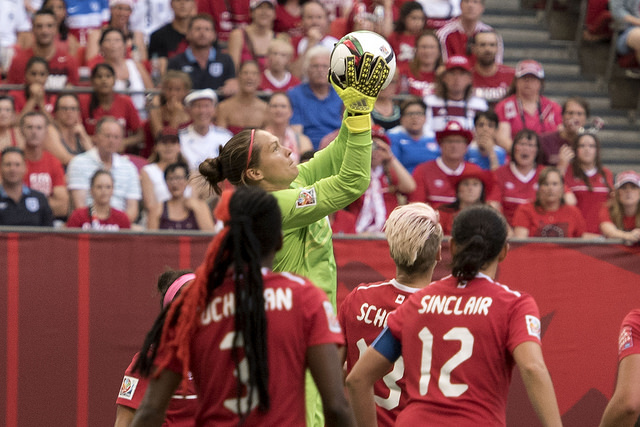 VANCOUVER, British Columbia – John Herdman has assembled 23 players in Vancouver for the first development camp of the year as Canada looks to solidify a strong roster of 20 players for the Rio Olympic qualifying tournament in Texas next month. Herdman has called in a young squad with a mix of veterans who participated in the Torneio Internacional de Natal in Brazil last month. Camp kicked off on January 9th and will conclude at the end of January.

“Yeah camp’s going well, the young players bring something a little different in terms of their spirit,” Herdman told The Equalizer from Vancouver. “They’ve been part of the program for a number of years—Buchanan, Fleming, Quinny [Rebecca Quinn]—and developing for a number of years. Some of the newer players have had the experience of the Pan Am Games and youth tournaments. It’s now just building the chemistry on the pitch.”

Center backs Kadeisha Buchanan and Rebecca Quinn (both 20 years of age), Shelina Zadorsky (23 years old), and Kennedy Faulknor (16 years old) make up a big portion of the young faces in camp. Buchanan is an elite defender and finding a complementary young defensive partner to play alongside her remains a top priority for Canada. Despite the lack of experience of playing at a senior national team level (Buchanan being the exception), Herdman has no concerns with the lack of veteran center backs in camp at such a vital position.

“We’ve got a FIFA Best Young Player in Kadeisha Buchanan. Rebecca Quinn is an NCAA finalist, Zadorsky and Faulknor are young up-and-coming players. The thinking is we have a world-class right centre-back and like Sinclair, one of the first players on the team sheet.”

The roster sheet for Canada’s camps since the World Cup did not include a number of players who were on Canada’s World Cup squad, including Kaylyn Kyle, Adriana Leon, Jonelle Filigno, Emily Zurrer, Carmelina Moscato, and Lauren Sesselmann. Those players have not retired from the national team and could be re-called for the Rio Olympic qualifying tournament and perhaps the Algarve Cup in March.

“Everything is in question,” said Herdman. “No player is off the radar; we’ve been very clear with our communication. This December was an assessment phase. We’ve been looking at the physical profiles. When you go into an Olympics you’re going to play tier one teams which requires different types of players. Those players know they are still in the thinking. This tournament is not a development opportunity for players.”

Goal-scoring and finding players to support Christine Sinclair remains a work in progress, as Canada struggled mightily to find the net at the World Cup. As Sinclair looks to pass Mia Hamm on the all-time goal scoring list with her next goal, she is going to need some help going forward. Janine Beckie and Nichelle Prince are both capable of sharing the scoring load and were able to chip in with goals last December in Brazil.

Herdman is hopeful that both players will progress and continue to contribute offensively. It also goes without saying that a healthy and in-form Diana Matheson will be a massive threat for Canada’s attack.

“I think the tournament in Brazil showed some signs for that,” Herdman said. “It was nice to see two scorers on the roster. Matheson was back and seeing her score was nice. We had Janine and Nichelle scoring against teams of quality. Belanger did it the game before. The scoring help is there; we have that pace and self belief. I’ve always said this, when players step up, Christine can be at her best and hopefully we can get that.” 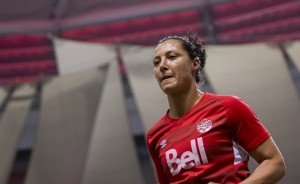 Melissa Tancredi has not scored for Canada since the 2012 London Olympics. (Photo: Canada Soccer)

Melissa Tancredi has to be mentioned as a player that Canada needs to step up to help with the scoring load. Since returning to the national team after taking a two-year break for chiropractic school after the 2012 London Olympics, the 34-year-old Tancredi has not scored for the national team. Tancredi has had numerous opportunities to score and none bigger than during the quarterfinal match against England at the World Cup. Tancredi scored five goals for the Chicago Red Stars in 21 appearances (nine starts) from 2014-2015. She will play for KIF Orebro in the Damallsvenskan this season.

Herdman hasn’t given up on Tancredi’s talents and still believes she can contribute and be a player that Canada can depend on: “I think every player moves through different phases. When she went back into the NWSL she bagged a few goals. I think with Melissa, people probably fail to see the amount of opportunities she had in the World Cup. She’s just getting back in the rhythm. I know behind the scenes she is working hard.”

The Olympic qualifying tournament does not fall into a FIFA window, so for the most part, club teams have no obligation to release players to a national team outside of a FIFA window. However, Herdman insisted that no club teams will prevent players from being called up. European based players Sophie Schmidt, Melissa Tancredi, and Erin McLeod will all be available if selected.

McLeod continues to rehab after picking up a minor knee injury at the December tournament in Brazil. At the moment she is with Damallsvenskan club FC Rosengard, but will join the Canadian team this Friday. At that time, her knee will be reassessed and her rehab will continue.

Herdman had a brief update on McLeod: “She is in Sweden at the minute, she’s on the way back on the 15th and she’s on our return to play plan. All the feedback we’ve had medically is that she will be coming back. I’m not an expert in that field; all the info from our physiotherapists is very precise.”

Canadian NWSL allocations for the 2016 season are expected to be announced later this week by the NWSL. Herdman and his players have deferred all comments regarding allocations until that time.

Notes: Canadian forward Summer Clarke picked up an injury in college during the fall and was reassessed during Canada’s November camp. As a result of her injury, she will not be one hundred percent fit for the Olympic qualifying tournament, and therefore was not called into the current camp. The Louisiana State University forward is another young goal scorer that Canada will be looking to for the future.