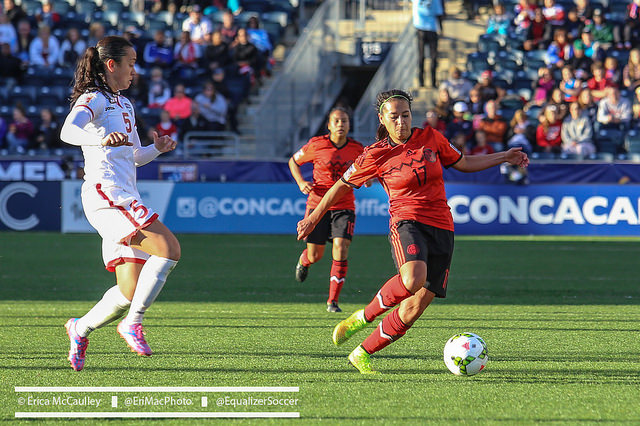 Mexico will not continue funding national team players’ salaries in the National Women’s Soccer League, a source familiar with the situation tells The Equalizer.

Team-by-team NWSL allocations are expected to be announced as soon as Monday. In the first three seasons of the NWSL, the U.S., Mexican and Canadian federations funded the salaries of their national team players in the league, but Mexico has wavered in its commitment to continuing to fund player salaries in the future, in part citing the lack of playing time Mexico players received from their NWSL teams.

Not a single player who played for the Mexico women’s national team in 2015 played a single minute in the NWSL in 2015. None of the four players allocated by Mexico in 2015 – Monica Ocampo (Sky Blue), Veronica Perez (Washington), Arianna Romero (Washington) and Bianca Sierra (Boston) – played a minute in the NWSL in 2015. Much of this had to do with Mexico bringing its full squad to both the World Cup and the Pan Am Games, which took place right after the World Cup, in July.

Even as late as August there wasn’t much clarity as to whether or not the four allocated Mexico players would be reporting to their teams, who would have to clear roster space for them in the homestretch of the regular season.

Now, Mexico will no longer pay the salaries of players who are in the NWSL, but it does not rule out Mexico players participating in the league should they make a roster. On Sunday it was announced that Perez, one of Mexico’s best players, signed with Swedish side KIF Örebro, which last week also announced the signing of Canada forward Melissa Tancredi.

Mexico coach Leo Cuellar told The Equalizer in September that NWSL coaches did not contact him after the Pan Am Games regarding their players, but he didn’t blame NWSL coaches. Instead, he challenged his players to be good enough to make NWSL rosters.

“The clubs are not at fault,” he said as the third NWSL regular season ended. “I think we need to challenge our players to be on the level [of the NWSL].” Cuellar went on to say that “constantly we have to start from zero again” as a national team with irregular training and not enough players earning significant playing time with clubs.

A recently announced women’s league in Mexico is a developmental league for younger players and is not a professional league.

Mexico begins training camp this week ahead of CONCACAF Olympic qualifying. Canada and the U.S. are favorites to earn the two regional berths to the 2016 Rio Olympics, but Mexico will hope to pull an upset. Even getting out of the group could be tough, however. Group A features Costa Rica, Mexico, Puerto Rico and the U.S. and only the top two teams advance to the semifinals.