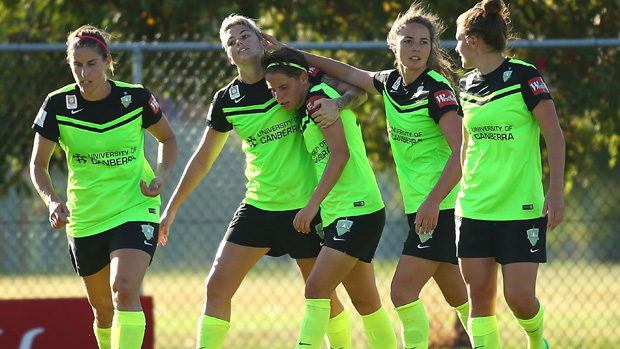 The Westfield W-League continued this weekend with the league’s thirteenth round of fixtures. Melbourne City, Canberra United, and Sydney FC have all clinched a playoff spot, which sets up a three-way battle for fourth place and the final semi-final spot next week in the league’s final regular season round. Here’s how things went this weekend across Australia:

Sydney FC defeated Newcastle Jets 2-0 on Saturday, its third win in four games, to secure a playoff spot for the eighth consecutive year—the only W-League club to make the playoffs every W-League season. Kyah Simon opened the scoring from the penalty spot in the 33rd minute after a foul on Lenna Khamis; Simon now has four goals this season. Khamis scored her fourth of the season in the 59th minute from a Jasmyne Spencer feed. Michelle Betos was in goal for her third shutout of the campaign and played all 90 minutes for Sydney as did Spencer and Simon. Caprice Dydasco and Megan Oyster played the entire match for Newcastle.

The game was held at ANZ Stadium, the 2000 Sydney Olympic Games Stadium, in front of a crowd of 2,650, the first time a W-League match had been held at the historic stadium. Sydney FC (6-1-4 W-T-L on 19 points) has clinched third place while Newcastle Jets (3-3-5 for 12 points) fell into a tie for fifth with Adelaide United.

Three first half goals propelled Brisbane Roar to a 4-0 away win against Melbourne Victory on Sunday. Goals from Australian internationals Claire Polkinghorne, Katrina Gorry, Australian youth international Angela Beard and New Zealand international Kristy Yallop gave Brisbane sole possession of fourth place entering the last week of the regular season. Polkinghorne, Gorry and Yallop all scored their second goals of the season while defender Beard scored her first of the season and first ever in two W-League seasons. Haley Kopmeyer recorded the shutout for the Roar (her third of the season) while NWSL loanees Haley Raso and Christine Nairn played 90 minutes for the Victory. Brisbane (5-0-6 for 15 points) will be looking to keep possession of fourth place in next week’s regular season finale, while Melbourne Victory (2-1-9 for 7 points) remains in last place.

Perth Glory defeated visiting Adelaide United 2-1 on Sunday, with all of the goals coming in the last half hour of the match from American players on loan from NWSL. Vanessa DiBernardo scored both goals for Perth (her fifth and sixth since her arrival in Perth midseason) while Abby Dahlkemper scored a late consolation goal for the Reds, her fourth of the campaign. Along with the two goalscorers, Nikki Stanton (Perth) and Sarah Killion (Adelaide) played 90 minutes for their respective sides. Perth Glory (3-2-6 for 11 points) improves to seventh place, one point behind Newcastle and Adelaide United (3-3-5 for 12 points).

Canberra United (8-1-2 on 25 points) clinched second place and a home semifinal with a 3-0 win over the Western Sydney Wanderers. Goals were scored by Caitlin Munoz (6th minute), Rebecca Kiting (11th minute) and Ashleigh Sykes (58th minute), the latter on a telling feed from Mexican international Veronica Perez. Munoz and Sykes now have two goals on the season while Australian U-20 international defender Kiting scored her first W-League goal in three W-League seasons. NWSL loanees Keelin Winters and Kendall Johnson played 90 minutes for the Wanderers as did Perez, Kendall Fletcher and Ellie Brush for the winners. Western Sydney (2-3-6 for 9 points) is in eighth place and has no mathematical chance to make the playoffs.

Veronica Perez is playing with powerhouse Canberra United after time with the Mexican national team—including the Pan-Am Games side in Toronto last summer. Canberra has been a powerhouse in the W-League since it began in 2008-9, making the playoffs in all but one season, with one title and three Grand Finals in total. Perez, in her first season in Australia, was impressed by the fan support in the Capital City: “From what I’ve experienced we have the best supporters in the league. We get a good crowd at our home games and the ‘Back Bench’ is always there cheering us on and taking jabs at our opponents during games. It makes it hard for other teams to come to Canberra and play. Canberra’s also a small city so teammates spend heaps of time together and sometimes it’s good for on-field chemistry. Luckily we’ve been able to unite as a group and get the results that have kept us in a good position for a home semi [which was clinched this past weekend].”

The California raised Perez played briefly in WPS (St. Louis Athletica) and in WPSL with Western New York Flash and the Washington Spirit. She compared the level of play between the two leagues: “The W-league is improving each year. The standards are rising across the league. With the additions of more internationals coming in, and having most of the Matildas [Australian national team members] play in season, it’s increasing the competition. However, it’s not at the same level as the NWSL but I think it’s a league that is growing and developing; give it some more time. But it’s doing a great job with its home based players. All players in the NWSL are professionals. Many players in the W-league are just kids, some inexperienced, so it’s a league where if you have played professionally for some years, or at the international level, you can kind of be a mentor and be more of leader in some aspects.”

Tom Sermanni, who will coach the Orlando Pride in 2016, was a vocal proponent of the start of the W-League. In 2007 Australia had been a revelation at the Women’s World Cup in China, making the quarterfinals where they lost narrowly to ultimate finalist Brazil 3-2. Sermanni’s primary focus on the league was to develop the youth national team players and give Australians a higher standard league. Without college soccer, there was a gap with few opportunities for players past the high school age. Since the league’s inception, it has developed a number of top quality youth players, with one example this season being 15-year-old forward Mindy Barbieri of Melbourne Victory, who has scored twice in her first W-League season.

The W-League has always attracted a few players from abroad each season but really started to get attention from top level players when German international defender Ariane Hingst played for Newcastle in 2011-12 and then Canberra United in 2012-13, followed the next season by German international goalkeeper Nadine Angerer joining Brisbane for two seasons. Other internationals have come from Canada, England, New Zealand, Norway, Scotland, Taiwan, the United States and Wales. The W-League, with largely separate funding but joint branding from men’s A-League teams—with Canberra, which lacks an A-League side, an aberration—has proven to be a successful model and has grown in stature at home and internationally.

After the playoffs, Perez said that she is exploring options for 2016—including NWSL and clubs abroad–indicating that: “I would love a chance to play abroad for a season or two.” She played one summer season in Iceland in 2012 with Stjarnan.

Next weekend, Adelaide United hosts Canberra United on Friday, while Melbourne City entertains Sydney FC and Brisbane Roar is away to Newcastle, both on Saturday. On Sunday, the Western Sydney Wanderers host Perth in the last match of the regular season. Brisbane Roar has the inside track on the fourth and final playoff spot; if they lose and Adelaide and/or Newcastle wins, then it will come down to goal difference with Brisbane and Adelaide currently tied (-1) and Newcastle two goals behind (-3).