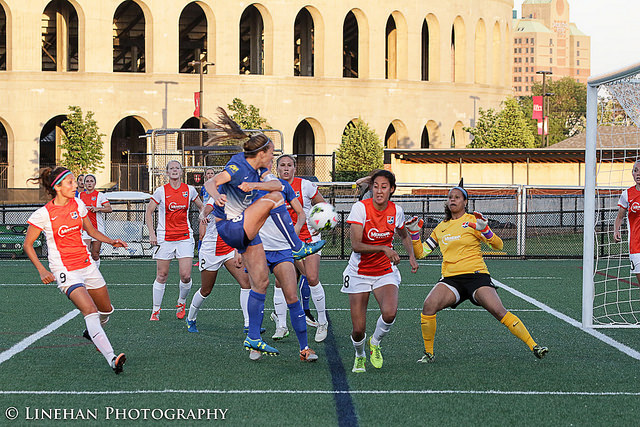 Sky Blue FC hasn’t had a coach for the past three months, but that should change this week. (Photo Copyright Clark Linehan for The Equalizer)

Sky Blue FC is close to announcing its head coach for the 2016 season, a source tells The Equalizer.

The club has been without a head coach since it was announced on Oct. 14 that Jim Gabarra would be leaving to become head coach and general manager of the Washington Spirit.

Rumors persisted over the past three months that defender Christie Rampone could take over as head coach if she chose to retire as a player, but a source tells The Equalizer that Rampone, 40, plans to play this season for Sky Blue. The club’s only professional championship, in 2009 in the now defunct WPS, came with Rampone serving as player-coach after a tumultuous season which included two coaching changes in under three months.

Sky Blue FC assistant coach Christy Holly was named the assistant to the general manager upon Gabarra’s departure, and Holly was put in charge of player personnel responsibilities. It is possible that he could be made head coach.

BigAppleSoccer’s Michael Lewis reported last week that “at least two people have turned down the job.” Sky Blue looked at several candidates through the three months that the job has been open. As The Equalizer reported, Sky Blue at one point looked at Denise Reddy, who was part of the organization when it was Jersey Sky Blue in the USL W-League from 2006-2008, but Reddy just took the assistant coaching job alongside Gabarra with the Spirit.

Rampone, who on Saturday was officially removed of her U.S. national team captaincy, played sparingly in 2015 due in part to injuries. She had minor knee surgery before Christmas and is out 4-6 weeks, according to U.S. Soccer. CONACACAF Olympic qualifying starts on Feb. 10.

Sky Blue and the Western New York Flash are both without coaches ahead of the 2016 NWSL College Draft, which takes place on Friday in Baltimore, Md.