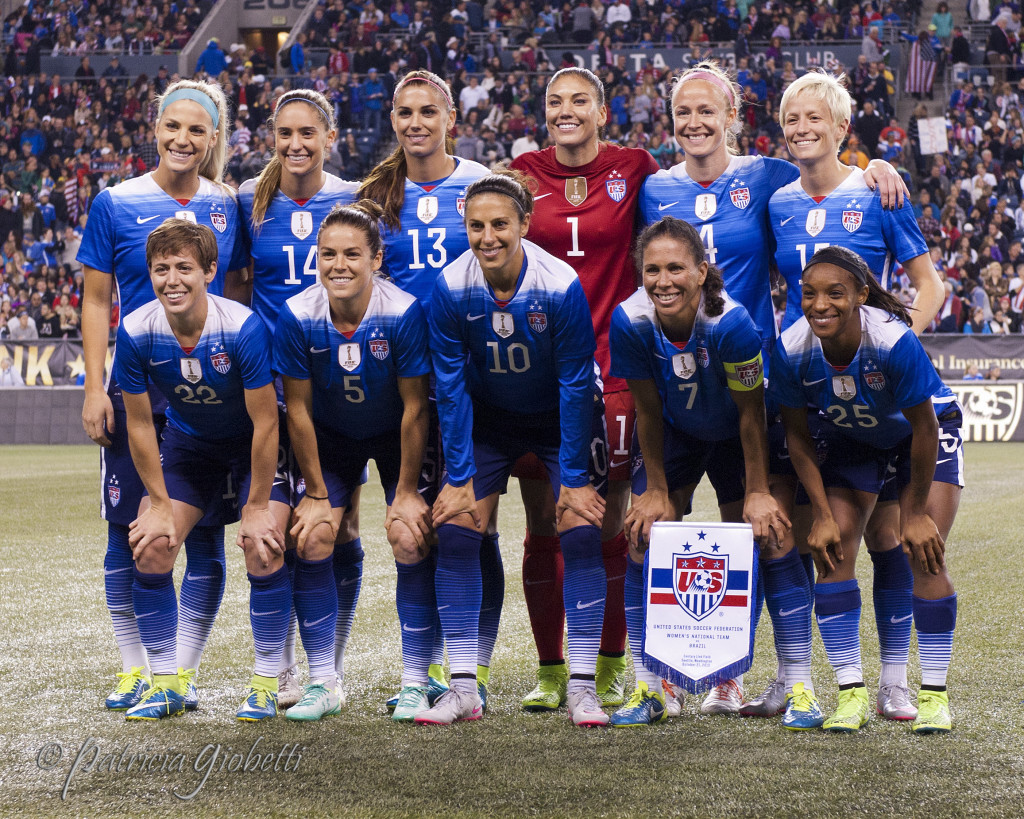 Carli Lloyd (10) and Becky Sauerbrunn (4) are the new captains of the USWNT. (Photo Copyright Patricia Giobetti for The Equalizer)

Lloyd and Sauerbrunn will help usher in a new era for the U.S. women following the retirement of world all-time goal-scoring leader Abby Wambach and with the injury to defender Christie Rampone. Rampone, who has 311 caps, has been team captain for seven years since being named by Pia Sundhage in January of 2008. Rampone is currently out 4-6 weeks following knee surgery before Christmas. She will be 41 years old in June.

Lloyd won the Golden Ball at the 2015 World Cup and scored a hat trick in the final against Japan, a 5-2 victory which lifted the U.S. to its first World Cup title since 1999. Sauerbrunn was arguably the United States’ most important player over the seven World Cup games, anchoring the U.S. defense to tie a World Cup record with a 540-minute shutout streak.

“Christie and Abby have been phenomenal leaders for this team for a long time, and we are forever grateful for their far-reaching contributions,” U.S. head coach Jill Ellis said. “As we move into the next phase of this program, I’ve selected two captains who I know will represent us extremely well on and off the field and will help facilitate the positive direction of this team. They are two extremely professional players in both game and training environments and they embody the DNA of this program.”

[MORE: For young Lindsey Horan, a different path to USWNT]

Lloyd, 33, will wear the armband when both she and Sauerbrunn, 30, are both on the field. They are the 13th and 14th players officially named captain of the U.S. WNT over the 31 years of the program.

“I never thought I would be captaining the national team, but I’m humbled and it’s an amazing honor,” said Lloyd, who wore the armband frequently in 2015 with Wambach and Rampone sidelined. “At this stage in my career, I’m ready to take on this type of leadership role but I also know that this team features a lot of great leaders and we all lead in our own way. We have high goals and standards and it’s the job of the veterans to make sure everyone is meeting those standards, which on this team of highly motivated women is an exciting prospect.”

Lloyd has 211 caps, eight all-time in U.S. history. Sauerbrunn has been capped 96 times.

“It’s a true honor to be named a captain of this team,” Sauerbrunn said. “I look at this group and what it’s accomplished and the hunger we still have for the things not yet accomplished and I’m constantly amazed. It’s a privilege to help keep that motivation strong and moving in the direction we want it to go.”

The U.S. kicks off its 2016 campaign on Jan. 23 against Ireland in San Diego, Calif. CONCACAF Olympic qualifying takes place from Feb. 10-21 in Houston and Frisco, Texas, where the U.S. hopes to be one of two teams from the region to qualify for the Olympics. The Americans are three-time defending gold-medalists.