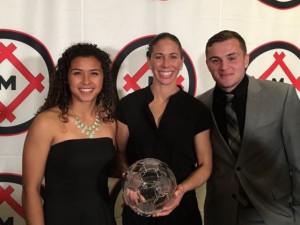 Penn State forward Raquel Rodriguez won the 2015 MAC Hermann Trophy on Friday in St. Louis, Mo., crowning her as the best women’s college soccer player of the past season.

Rodriguez is the second Penn State women’s player to win the MAC Hermann Trophy, joining Christie Welsh, who won the award in 2001.

“I want to thank my teammates,” Rodriguez said. “I wouldn’t have been able to win this award without them. It’s an individual award but it’s a team award.”

Rodriguez is among the 145 players who initially declared for the 2016 NWSL Draft. She is expected to be one of the top picks in the draft.

Stanford forward Jordan Morris won the men’s MAC Hermann Trophy. The Pac-12 Player of the Year, Morris had a career-high 13 goals in 18 appearances for Stanford in 2015. He recently announced that he is turning professional and forgoeing his final season of eligibility at Stanford.