The Lowdown: The man to make Sky Blue viable? 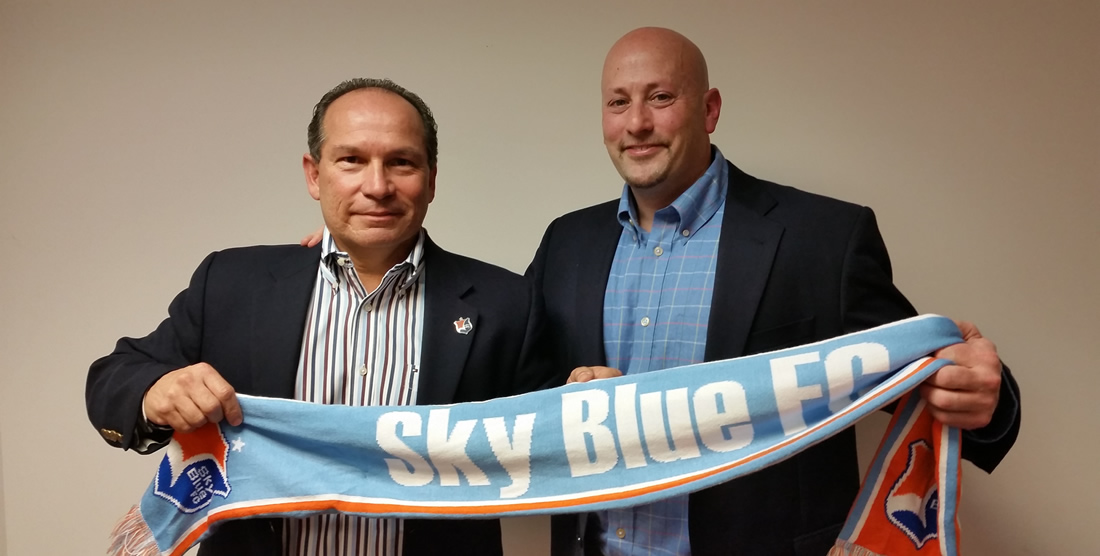 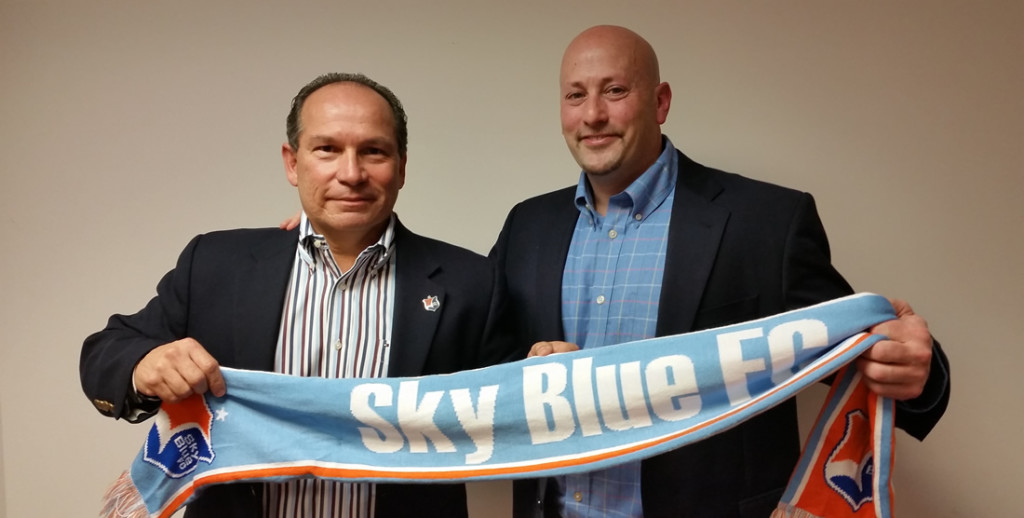 Herm Sorcher has worked at various levels of sports over the last two-plus decades. He was part of the top flight when he worked for the NHL’s Hartford Whalers, and he has worked at grassroots levels throughout minor league baseball and hockey.

Now Sorcher is on board at Sky Blue FC as the club’s vice president of business development. The Freehold, N.J. native will be tasked with managing the overall business strategy for Sky Blue.

“I would say my role is anything growing business development and revenue,” Sorcher said in a recent interview. “So any way that we can grow the organization whether that’s ticketing, sponsorship, promotion, that’s what I’m going to focus on.”

To that end, Sorcher will be working to improve the game day experience at Yurcak Field, where the club plans to return for a seventh season. The easiest area of improvement to attack is attendance, a category Sky Blue has finished bottom of the NWSL in all three seasons. Sorcher sees the approximate Yurcak capacity of 5,000 and figures, ‘Why not?’

No one, including Sorcher, believes Sky Blue — still in search of a head coach — will sell out Yurcak Field 10 times this summer, but last year’s showcase against the Thorns and some well-attended games from a league long ago proved sellouts can be accomplished. Sorcher’s job will be to trend back in that direction on a more regular basis. And he believes his experiences in both the NHL and minor league sports will mesh to produce the right formula in Sky Blue land.

“I think it kind of falls above a minor league product but it’s not one of the four major sports,” he said. “There’s a great blend where it can still be that good, affordable family entertainment—and the prices are certainly affordable—but you’re combining it with world-class stars. There’s a great combination.”

Bifurcating the two sides of that combination, Sorcher said the top sports leagues in the world draw according to the opponent whereas the minor league clubs draw based on promotions and day of the week. The nascent history of women’s professional soccer indicated that at least opponents and days of the week are factors.

On the first point he said of his years in minor league sports: “The last 23 years I’ve never gotten to work with world-class athletes. Very rarely did I have a situation where a player on the home or visiting team ever sold a ticket. Occasionally if we have a rehab start for a minor league baseball player or something like that. But we never had an Alex Morgan. We never had a Hope Solo.”

Sorcher’s first 30 days with Sky Blue have offered some signs that the club’s fan base, while small, has some resemblance to that of a major league crowd. “What I have seen right from the start is that there’s an unbelievable amount of passion for this product. There are passionate people who are behind the team and who love the players and support the team.” And Sorcher has connected with the most passionate of those fans via his personal email and cell phone, both of which he published in an open letter to fans on the club’s website.

Former Sky Blue head coach Jim Gabarra used to say that if every registered soccer player in New Jersey came to one game a season, Yurcak would be filled for every match. Sorcher’s goal is to look beyond the soccer fan and make Sky Blue games at Yurcak Field a place families want to spend their time and money.

”Where this team needs to connect more and where we can improve,” he said, “is making it more of the good, affordable, fun family experience. We’re going to go beyond the soccer fan. We know soccer fans are going to be interested in this product. Now we have to take it to the next level. We have to find people who are looking for that night of family entertainment and get them connected to the team and connected to the experience.”

The Rutgers campus where Yurcak Field sits often seems as if it is in the middle of nowhere, but Sorcher is quick to point out that the location gives Sky Blue proximity to multiple areas of high population concentration.

“I look at where we’re located,” he says. “The Jersey shore; New York City; centrally located in the state. There’s more people here than any other soccer team in this league. We’ve got a huge population base to draw from. What we’ve got to do is connect to those potential fans and give them a reason to come out.”

The offseason has been a bit of a drag for Sky Blue. Gabarra jumped ship to the Spirit in October, and the team remains without a head coach as the countdown to the draft approaches one week. Season tickets did not go on sale until days before Thanksgiving, and no connection was made for future tickets with anyone at the sold-out Thorns match. Even player news has been minimal with not a single acquisition announced since the end of the 2015 season.

“I would say that process is underway, and I think we’re doing pretty well with it,” Sorcher said of season ticket sales. He did not elaborate.

Among the positive if quiet notes, the club is close to finalizing a deal for a sponsored kids club, a concept Sorcher said has been high on the wish list among those that have taken up his offer to connect via his cell number.

“I’m confident we’re going to have a good team, but what I’m more confident about is that we’re going to put on a good show for our fans,” he said. “I think there is an open canvas for this team. And we can paint a great picture. I see unlimited potential. I really do.”

— The Spirit inked Katie Stengel to a contract last week as they search for a striker than can partner Crystal Dunn as well as carry some of the load when Dunn makes what looks more and more like an inevitable trip to the Olympics.

— The Flash also made a signing, becoming the first team to dip into the South Korean market with the acquisition of Jeon Ga-eul.  Jeon had a goal and an assist for South Korea at the World Cup.

— Sources indicated to The Equalizer last month that the Sky Blue coaching search was down to two finalists. As of late Monday there was no word on when a decision or announcement will be made.

— Sources tell The Equalizer that Canadian goalkeeper Stephanie Labbe is headed to the Washington Spirit, likely via the allocation process.

Hearing #CanWNT's Steph Labbe is headed to the Washington Spirit for the 2016 #NWSL season, likely via allocation.

I have never met or spoken to Laura Bassett, but I was in Commenwealth Stadium when her own goal authored the cruelest of endings to England’s World Cup hopes. It was a sublime moment and it left fans and media alike—all of whom were mentally gearing up for extra time—unsure about exactly how to react. As someone covering the events, part of my job is to help portray some of the emotion of the day to the written word. On that day there were no words that could have accurately told the story of what it felt like to see one of the most reserved players in the world make a very public blunder at the most inopportune time. Bassett did not address the media that day, but England coach Mark Sampson gave one of the bravest and most poignant post-match press conferences I have ever been to or seen.

Fast forward to last week and Bassett spoke a bit about the own goal in an interview with The Independent.

“We were having some food and reflecting and I saw it, and every half hour when it was repeated I saw it again,” Bassett told Glenn Moore about dinner with her family after England’s semifinal loss to Japan. “But I also thought, 10 to 15 years ago that would not be on TV. We want to make the women’s game more high-profile. We have to accept what comes with that.”

That is a wonderful bit of perspective from Bassett. And frankly, it remains an element of the women’s game that remains in arears of its male counterpart. We love to celebrate our female sports heroes, but the time is coming—the time should be now—when we also want to be let in on some of the anguish that goes with the other side of things. That is not to suggest parading an utterly inconsolable Laura Bassett out to greet the press in the moments after such an ignominious occasion. But it does mean we ought to stop shying away from confronting the losing side. After all, the reason we watch soccer and other sports is to watch great athletes compete. And without losers there can be no winners. It is the next frontier in the evolution of women’s sports. I’m glad to see that Laura Bassett is on board.