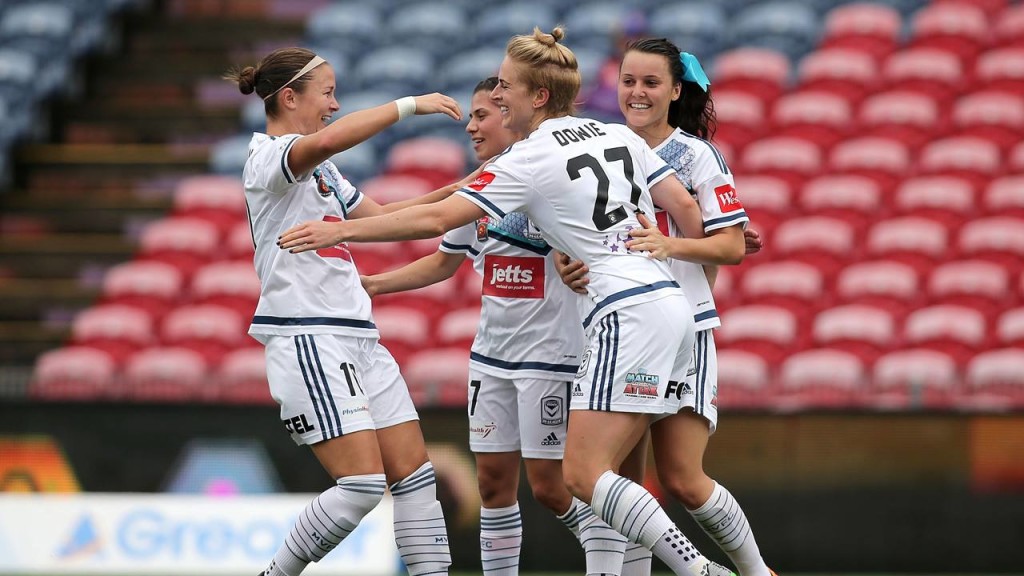 The Westfield W-League continued this weekend with its twelfth round of fixtures, with Canberra United joining Melbourne City as the two teams already qualified for the playoffs. With two rounds of the regular season remaining, the middle of the table is tight, with teams fighting for the remaining two places in the league’s semi-finals. Here’s how things went across Australia this weekend:

On Saturday, Australian international defender Ellie Brush (Houston Dash) scored on a 22nd minute header—her first of the season—and Ashleigh Sykes scored in the 87th minute—her sixth of the season—to give Canberra United a 2-0 road victory against Perth Glory. It was a rematch of last season’s Grand Final, which Canberra also won. Canberra’s sixth consecutive win guarantees them a playoff spot in 2015-16, their seventh in eight W-League seasons. Canberra and Australian international goalkeeper Lydia Williams said after the match: “We’ve had a really good season, it started off a bit rocky, but we’ve come good during the end of it. To get what we needed, with two games in hand, is a real positive sign for us and we have time to work on the things we need to for the semi-finals.” The Capital City side is in a strong position to capture second (7-1-2 W-T-L on 22 points), guaranteeing them a home semifinal, as they sit six points ahead of idle Sydney FC (5-1-4 on 16 points) with both sides having two matches left in the season.

Kendall Fletcher, Veronica Perez, Michelle Heyman and Brush all played 90 minutes for Canberra. Vanessa DiBernardo and Nikki Stanton both played 90 minutes for the Glory, while Caitlin Foord had to leave the match late in the first half with a suspected broken collarbone after landing on her right shoulder. Perth Glory (2-2-6 for 8 points in eighth) looks very likely to miss the playoffs for the sixth time in eight seasons.

Broke my collar bone, I’m heading in for surgery today. Thankyou for all the kind messages, I’ll be back soon pic.twitter.com/vuVV2JOYV2

Melbourne City used two goals from Kim Little (one from a penalty kick) to defeat Western Sydney Wanderers 4-0 on Sunday to remain undefeated (11-0-0 and 33 points). Little now has 8 goals on the season, three behind teammate Larissa Crummer, who leads the league. Australian youth internationals Beattie Goad (her third of the season) and substitute Marianne Tabain (her sixth of the season) scored the other goals for City. NWSL loanees Jess Fishlock, Steph Catley and Little played 90 minutes for Melbourne. Mexican international forward Anisa Guajardo (ex-Pepperdine University and Pali Blues and an original Mexican allocation in NWSL with Boston but did not play in 2013) was a second half substitute. For Western Sydney, Kendall Johnson, Keelin Winters and Canadian international Carmelina Moscato played 90 minutes. Melbourne City’s 33 points is a record for a W-League regular season, surpassing the 30 points Perth Glory recorded last season. Western Sydney (2-3-5 for 9 points and seventh place) looks likely to miss the playoffs for the fourth consecutive time since entering the league for the 2012/13 season.

English international forward and Liverpool loanee Natasha Dowie scored the only goal in the 13th minute for Melbourne Victory in a 1-0 victory over Newcastle Jets on the road, a real setback for Newcastle’s quest for their second playoff berth, after finishing second in the W-League’s inaugural season. Christine Nairn and Hayley Raso went 90 minutes for Melbourne as did Caprice Dydasco and Megan Oyster for Newcastle. Even a point would have given the Jets sole position of fourth but now they are tied for fourth with Adelaide City and Brisbane Roar, all on 12 points. This race for fourth could come down to goals difference, with Adelaide City (0) having a slight advantage over the Jets (-1) and the Roar lagging behind (-5). Melbourne Victory (2-1-8 for 7 points) is still in last place but with the win is now only one point behind eighth placed Perth.

First half goals from Ruth Blackburn, Gabrielle Marzano and New Zealand international Kristy Yallop gave Brisbane Roar a massive three point road victory over Adelaide United on Sunday. The win propelled the Roar (4-0-6 for 12 points) into a tie for fourth with Adelaide and Newcastle (both 3-3-4 for 12 points) with two games left, with their last game of the season on January 16 a crucial road match with Newcastle. Blackburn and Marzano scored their second goals of the season while Yallop scored her first. NWSL loanee Haley Kopmeyer was in goal for Brisbane, while Clare Polkinghorne went the distance for Brisbane as did Sarah Killion and Abby Dahlkemper of Adelaide. Dahlkemper scored a late consolation goal for Adelaide, her third of the season