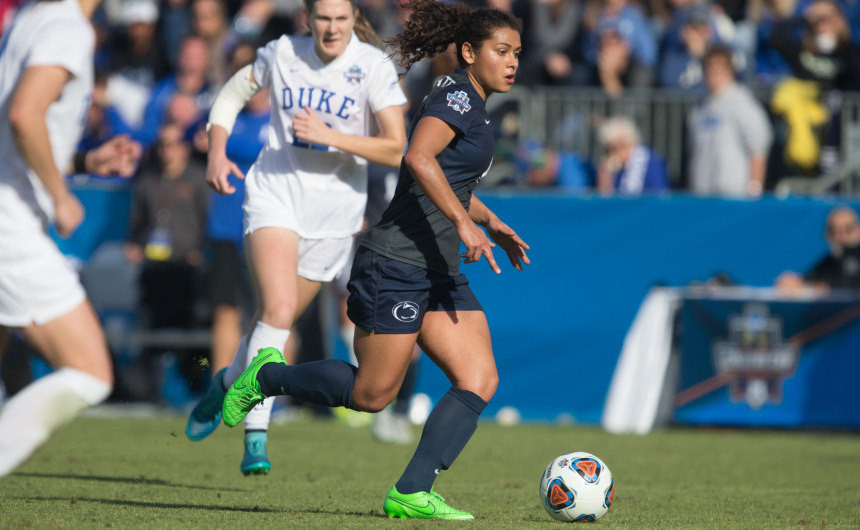 Although it’s difficult to succinctly recap a season in women’s college soccer, three words seem to sum up the 2015 season perfectly: youth, change, and international.

Let’s start with change. For the third time in as many years, a first-time NCAA champion was crowned as Penn State defeated Duke in Cary, N.C. earlier this month. To put things in perspective, the NCAA first sanctioned a women’s soccer championship in 1982, and it wasn’t until 1995 when Notre Dame earned the title that 3 different teams had won. North Carolina won 11 of the first 13.

North Carolina’s struggles this season encapsulate the changing landscape of women’s soccer. For just the second time in the storied program’s history, the Tar Heels lost three games in a row and for the first time ever, North Carolina failed to advance to at least the third round of the NCAA tournament. Albeit the team’s early exit was in large part facilitated by a string of injuries, it’s still a sign of the times. With more programs competing for top recruits, and the Tar Heels dealing with the fallout of the highly publicized academic scandal, it’s not mere conjecture to say that North Carolina will not dominate again as it has in the past.

Another sign of the changing times? Increased broadcasting/streaming of games. In a press conference ahead of the final, Penn State’s Erica Walsh commented that scouting her opponent was easier than in the past as so many more women’s soccer games were aired. Of course, the more accessible the game is, the better for all interested parties- whether participants or spectators.

Moving onto youth, underclassman played a huge role in determining the teams’ fates this season. In College Station, a Texas A&M team that graduated the majority of its Final Four squad from a season ago exceeded expectations making it to the Elite Eight.

The Final Four was full of teams with young players. Irish international Megan Connelly led Florida State with 28 points, tallying 9 goals and 10 assists on the season. Duke was paced offensively by freshmen Kayla McCoy and Taylor Racioppi, the latter of which quickly established herself as one of the most entertaining players to watch in the ACC. For the champions, not only were the team’s two leading scorers sophomores but the entire backline, which held opponents scoreless throughout the tournament, consisted of underclassmen. It will be exciting to see what these young guns do in 2016 and beyond.

Finally, let’s talk about the influence of foreign players in collegiate soccer. Sure, foreign players have been playing in the U.S. collegiate system for quite some time now, but their presence has seemingly never been more impactful than it is now. Two of the three Mac Hermann finalists are internationals, Kadeisha Buchanan of West Virginia and Raquel Rodriguez of Penn State. Given that two of the semifinalists are defenders and only once as the award gone to a defender, it seems likely that the award will go to Rodriguez. If it does it will be the fifth time that the award has gone to an international.

Elsewhere on the college scene, Rachel Daly and Georgia Kearney-Perry helped St. John’s reach new heights. Daly obliterated defenses in her three years while Kearney-Perry overcame injuries early on in her career to become one of the nation’s best center backs. These players, of course, represent just a small portion of the international players playing major roles in the college scene. As the women’s game continues to evolve globally, the impact of these players will also continue to grow.

Youth, change, and international. Add these elements together and it made for an exciting year in college soccer. Here’s hoping the 2016 season is just as exciting.

Here’s a look back at some of the most memorable moments from the 2015 season:

Back on October 22nd, it looked like a SEC contest between Florida and South Carolina was destined to end in a stalemate, but just before time expired Gator midfielder Liz Slattery’s last second strike found its way into the back of the net. Florida would go on to win its 11th conference title.

Call it an amazing punt, or call it poor goalkeeping, but this long range goal from August is worth remembering. The goal was Longhorn Abby Smith’s third career goal. Not bad for a goalkeeper.

Raquel Rodriguez’s goal in the championship game was a perfect final goal of the season. The result of a fine bit of skill rather than a mistake, as often is the case on the college game’s largest stage, the goal is worth a second look.

Perhaps it’s a bit cheap to include another highlight from the College Cup, but the atmosphere for both the semifinals were electrifying. 11,676 packed the stands Friday night and over 10,000 showed up for the final. What makes the College Cup crowd memorable wasn’t the size though, but enthusiasm. Duke fans showed up in droves to support the local team, and supporters from Penn State made up for their lack of numbers by bringing the noise.

The first weekend of the NCAA tournament is good for some thrills and this year was no different. Granted hat tricks aren’t uncommon in the first weekend as there are a considerable number of lopsided matches, not many are as important to the game’s outcome as Andrews’. In a game between two top 25 teams, Cal State Fullerton jumped out to a 2-0 lead over Southern California. Enter Morgan Andrews. She scored twice in the second half to tie the game. The Titans regained the lead less than two minutes after Andrews tied it. Lucky for the Trojans, Andrews wasn’t done yet and completed her hat trick seven minutes later. Trojan keeper Sammy Jo Prudhomme made an incredible one-handed save to secure the Southern California victory in penalty kicks.