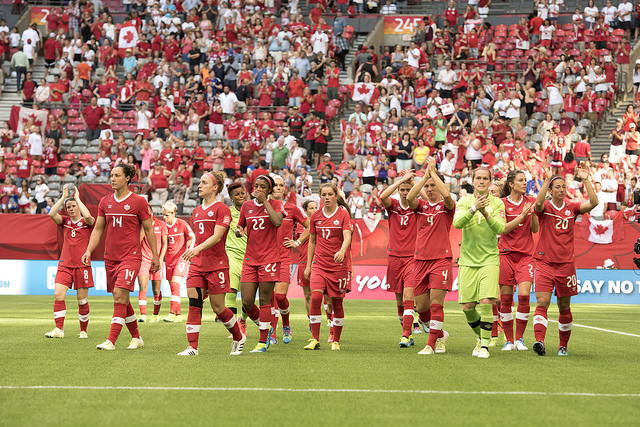 Canada advanced to the quarterfinals of the World Cup on home soil in 2015. (Photo: Canada Soccer)

VANCOUVER, British Columbia — Canada will remember 2015 as an exciting and momentous year. As hosts of the 2015 FIFA Women’s World Cup, Canada put on a tremendous tournament from coast to coast in six cities.

The entire country was brought together from June 6 – July 5 to cheer on and support Canada and the visiting national teams. The matches were for the most part evenly contested, fast-paced and showcased women’s football to many new audiences that may not have been familiar with the sport.

As the World Cup grew closer, interest and profiles of the 23 players John Herdman selected to his roster became more mainstream. The boost in media, fan, and marketing interest in the team was something not seen before. This helped to build the hype machine before the opening match against China on June 6.

Going into the World Cup, Canada believed that anything was possible and winning the World Cup was a goal certainly attainable. At one point, John Herdman boldly predicted a Canada vs. USA final. Canada took on a united front as the most connected team at the World Cup. Every player was playing with the mentality of ‘Why not us?’ Realistically pundits and supporters predicted a berth in the quarterfinals and nothing beyond. Canada fed off fantastic home crowds in Edmonton, Montreal and Vancouver, and advanced to the quarterfinals by playing a strong and tight defensive-minded frame in front of goalkeeper Erin McLeod.

Christine Sinclair should also be acknowledged for having a strong 2015 calendar year. The 32-year-old Sinclair has always led the line as Canada’s biggest goal-scoring threat. The scoring depth behind Sinclair never materialized at the World Cup. Seeing the best defenders from Canada’s five World Cup opponents did not prevent Sinclair from leading Canada in goals. She is still a peak performer and continues to pile up the goals. Earlier this month, Sinclair tied Mia Hamm for second place all-time in goals scored with her 158th tally. In 2015 Christine Sinclair led Canada in goals, assists, minutes played, and starts.

Kadeisha Buchanan came into her own and showed the rest of the world that she is one of the best up and coming centerbacks in women’s football. Her hard-nosed tackling, speed, toughness and awareness on the pitch have helped Canada find and develop a cornerstone central defender for years to come. Buchanan won the 2015 FIFA World Cup Best Young Player Award, and was also shortlisted for 2015 FIFA Player of the Year. Canada’s 2015 BMO Player of the Year Award went to Buchanan. The 20-year-old will no doubt be picking up more awards and accolades as Canada continues to see her at her best.

What a year! If someone asked if I can think of one word to describe my year? SURPRISED. #SetTheBarPrettyHighFor2016 pic.twitter.com/hu5ShCjW9F

— Karina LeBlanc announced her retirement from football and received cheers and continued support and admiration from fans during the World Cup and with the Chicago Red Stars of the NWSL.

— Canada continues to form a rivalry with England. John Herdman and Mark Sampson’s squads met on three occasions in 2015 with England winning the Cyprus Cup final and a World Cup quarterfinals match. Canada was able to earn a victory in a pre-World Cup friendly over the Lionesses in May. Sampson and Herdman were notably two of the sharpest dressers at the World Cup, and Sampson even made jest of Herdman’s tight shirts to media ahead of the quarterfinals.

— Diana Matheson and Lauren Sesselmann both overcome significant ACL injuries and return to play for Canada at the World Cup, although Matheson’s role was limited to just 28 minutes in an unsuccessful attempt to save the team from elimination.

— Canada will next take to the pitch on Feb. 11, in a 2016 Rio Olympic qualifying match against Guyana in Houston, Texas.