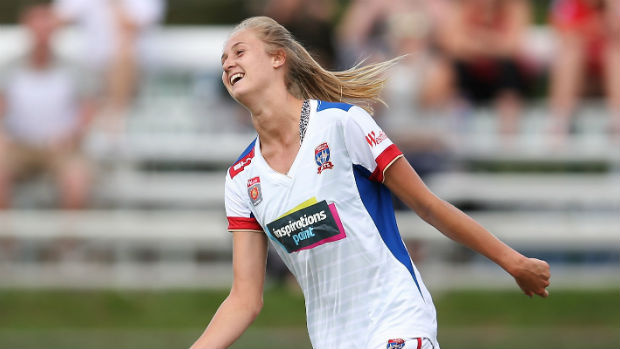 Sydney FC bounced back from a 3-0 setback last week to Brisbane by defeating Melbourne Victory 2-1 on Sunday in Week 11 of the Westfield W-League. Sydney FC now has only that loss to Brisbane in their last five matches, with a 5-4- mark overall for 16 points and third place.

Leena Khamis (10th minute) and Jasmyne Spencer (22nd) staked Sydney to an early lead, with both scoring their third goal of the season. Among NWSL loanees, Michelle Betos was in goal for the win while Kyah Simon and Spencer all played 90 minutes for Sydney, as did Christine Nairn and Hayley Raso for Melbourne. Mindy Barbieri—just 15 years old—scored her second of the season in the 47th minute but the Melbourne side is still rooted at the bottom of the league (1-8-1 for 4 points and last place). Sydney FC is only three points behind idle Canberra United for second place and a home semifinal berth for the playoffs.

A Tara Andrews strike gave the Newcastle Jets a 1-0 victory over Western Sydney Wanderers on Sunday; the Jets still have a playoff spot within their control, which would be only their second all-time in the W-League. Andrews, the former Colorado Pride (USL W-League) striker and now an Australian full international, scored in the 41st minute for her third strike of the season and 26th in her W-League career. NWSL loanees Carmelina Moscato and Keelin Winters played the entire match for the Wanderers, while Caprice Dydasco and Megan Oyster did the same for Newcastle. Western Sydney (2-4-3 for 9 points) is now tied for sixth with Brisbane, while Newcastle Jets (3-3-3 for 12 points) is tied for fourth with Adelaide United.

Melbourne City remained perfect in 2015-16 with a 1-0 road win at Brisbane Roar on a Kim Little goal in the 6th minute, her sixth of the season. The win clinched the Premiership (regular-season title) for City, which guarantees them hosting rights for the semifinal and Grand Final, if they advance. Regarding NWSL loanees, Little, Jess Fishlock, Steph Catley and Lisa DeVanna all started for the winners, as did Haley Kopmeyer in goal, captain Claire Polkinghorne and Katrina Gorry for Brisbane. DeVanna was substituted out of the game in the 78th minute for Australian international Alexandra Chidiac. The Roar look likely to miss the playoffs for a second consecutive season.