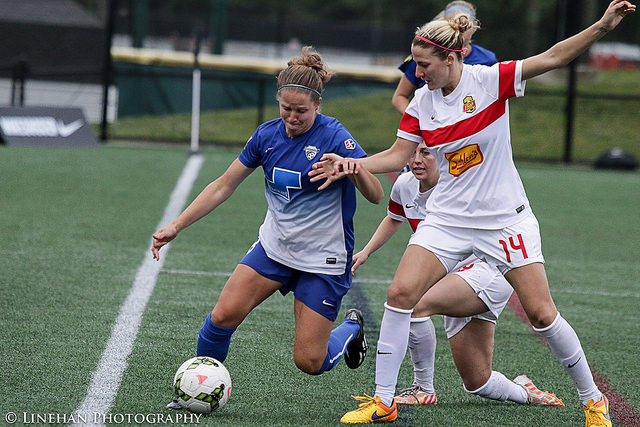 Becky Edwards (right) has been traded from the Western New York Flash to the Orlando Pride, along with Kristen Edmonds. (Photo Copyright Clark Linehan for The Equalizer)

Orlando will be Edwards’ fourth team in four NWSL seasons. She was previously a member of the Western New York Flash in Women’s Professional Soccer (WPS) in 2011, serving as a key cog in the midfield (as I wrote then) for a star-studded team which won the championship that year. She also won a WPS title the year prior with FC Gold Pride, which folded following that 2010 triumph.

Edwards, a central midfielder, will now play under the guidance of Orlando coach Tom Sermanni. Edwards was slated to earn a call-up to the United States women’s national team in 2013, when Sermanni was the United States’ coach. But a torn ACL while playing for eventual 2013 NWSL champions Portland Thorns FC prevented Edwards from ever making it to U.S. camp. Edwards had previously earned a look in U.S. camp under Pia Sundhage following the 2011 World Cup, but Edwards has never played for the U.S. senior team. She has extensive experience at the youth international level.

Edwards recovered from her ACL injury quickly enough to be ready for the 2014 season in Houston, where she landed via the expansion draft and played in 23 games. After that season, she was sent to Western New York alongside Whitney Engen in the blockbuster trade which shipped U.S. midfielder Carli Lloyd to the Dash.

Edwards, 27, played every minute for the Flash in 2015. The team, which won three straight championships in three different leagues from 2010-2012 and lost their shot at four in four in the inaugural NWSL championship, missed the playoffs for the second straight year, finishing 6-9-5 (23 pts.).

“I thank Becky for all she gave the club last season and wish her all the very best in the future,” Flash head coach Aaran Lines said.  “Becky was at a point in her personal life where she wanted to be in Orlando, closer to family and friends, and we were able to accommodate her desire in a trade that worked for both clubs.”

Meanwhile, Edmonds is likely to serve as a fullback for Orlando, although she is also capable of playing higher up the field in a wide position. Edmonds played 11 games for the Flash in 2015, registering one assist. She also tallied one assist for Western New York in 22 games in 2014.

Orlando now has three remaining picks in the 2016 draft.

Thursday’s trade gives the Flash a fifth total pick in the 2016 draft and second in the second round. The Flash no longer have a single player from their inaugural NWSL roster in 2013 after trading defender Brittany Taylor to Kansas City in November. The Flash also traded away Amanda Frisbie and U.S. defender Whitney Engen (who eventually landed in Boston).

Lloyd wins second US Soccer Player of the Year
No goals in finale: Wambach retires with 184