Lloyd wins second US Soccer Player of the Year 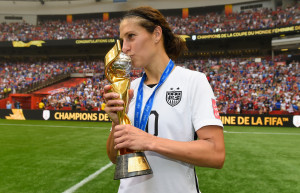 Golden Ball winner Carli Lloyd has been named U.S. Soccer’s Female Player of the Year for 2015.  The midfielder’s year was highlighted by her hat trick in the opening 16 minutes of the World Cup final helping the U.S. open up a 4-0 lead over Japan.  They won the match 5-2 after which Lloyd was presented the Golden Ball as the best player in the tournament.

It is the second such honor for Lloyd who also won in 2008.  At that year’s Olympics, Lloyd scored the extra time goal in the gold medal match to lead the U.S. to a 1-0 victory over Brazil.  She joins a who’s who of U.S. national team stars who have won the award multiple times.  The others are:  Abby Wambach (6); Mia Hamm (5), Michelle Akers and Kristine Lilly (3); April Heinrichs, Carin Jennings-Gabarra, and Tiffeny Milbrett (2).  The award was first given in 1985.

Entering Wednesday’s friendly against China, Lloyd had 18 goals and 5 assists in a U.S. kit this year.  Six of those goals came in the World Cup, all in the knockout stage.

Lloyd is also a finalist for the Ballon d’Or, FIFA’s award for the best player in the world.  Celia Sasic and Aya Miyama are the other finalists.  The announcement will be next month.