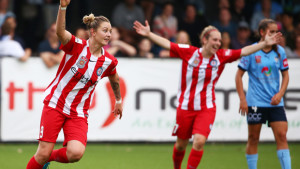 American midfielder Jamie Pollock played at the University of Georgia, for Boston Breakers Reserves after signing with the Atlanta Beat in WPS before the 2012 season—which never took place—and has been an assistant coach at Florida Atlantic University. She has made a positive impression for the Victory in this difficult season. Pollock played with South Melbourne in the Women’s Premier League (Victoria State League), helping the team capture the league title before joining the Victory. Pollock played the entire game. With the point, the Wanderers are now tied for fourth with Adelaide and Newcastle.

Home side Canberra United scored two early goals, from Michelle Heyman in the 10th minute and Jenna McCormick in the 16th minute, en route to a 4-0 win over Adelaide United on Saturday to remain in second place, three points ahead of Sydney. In the second half, Heyman added her second goal of the game in the 83rd minute and Mexican international Veronica Perez added a penalty-kick goal in stoppage time, her second goal of the season. Heyman, who played with the Western New York Flash after the World Cup last summer, now has four goals on the season and 54 in the W-League, the league’s all-time leader in goals ahead of Kate Gill (42)—who is not playing this season—and Brisbane Roar’s Tameka Butt (41). Canberra’s New Zealand international Emma Kete (who once played for Ottawa Fury along with clubs in Finland, Germany and England and briefly for the Western New York Flash) played her first game since Week 2, entering with 25 minutes left. NWSL loanees Kendall Fletcher played 90 for Canberra as did Abby Dahlkemper and Sarah Killion for Adelaide, who have only two points from their last four games.

On Sunday, Melbourne City continued on its path for an undefeated season with Australian youth international Beatrice Goad scoring the winner in the 44th minute—her second tally of the season— against the Newcastle Jets on an assist from Kim Little. NWSL loanees Caprice Dydasco and Megan Oyster played the entire match for Newcastle while Little, Steph Catley (just traded from Portland to Orlando) and Jess Fishlock did the same for City. The match—a prelude to the A-League game later in the day between the Jets and City (which Melbourne also won 4-0) —drew a strong crowd of 3,292 to the Hunter Stadium. The 1-0 win was City’s closest margin of victory so far this season.

Sydney FC went to Perth on Sunday and came away with a 4-2 win, keeping the Harbor City side in third with a 4-3-1 mark and dropping Perth into seventh with a 2-4-2 record. Vanessa DiBernardo scored a brace for Perth and Kyah Simon did the same for Sydney, which also had goals from Jasmyne Spencer and Australian international Nicola Bolger. Perth has one point in four home games so far this season and look in danger of not making the playoffs after last season’s Grand Final appearance, despite the stellar play of DiBernardo, who now has four goals in five games.

For Week 10, Newcastle Jets host Adelaide United and Canberra entertain Melbourne Victory, both on Saturday, while on Sunday, Sydney FC is at home to Brisbane Roar and Melbourne City hosts Perth Glory, with Western Sydney Wanderers having the bye.