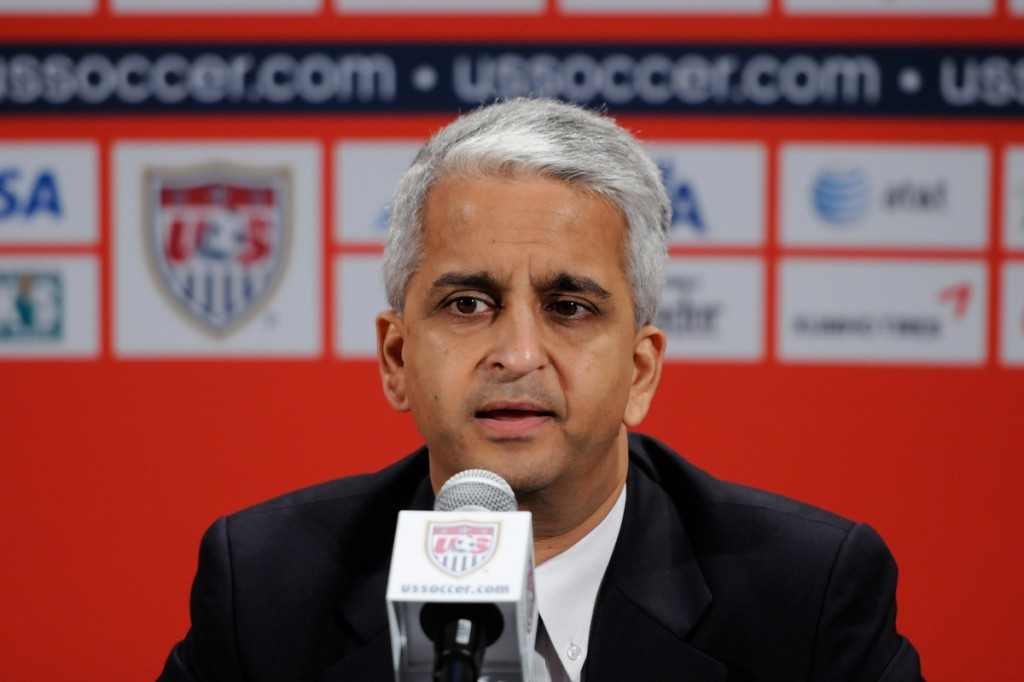 President Sunil Gulati admitted that U.S. Soccer “screwed up” in Hawaii. Now, there has been a class-action lawsuit filed against U.S. Soccer and the Aloha Stadium Authority.

A class-action lawsuit has been filed against the U.S. Soccer Federation for the cancellation of what would have been the team’s first-ever match in Hawaii on Sunday.

Attorneys Brandee Faria and John Perkin filed the lawsuit against the USSF and the Aloha Stadium Authority on behalf of two fans from Oahu who spent more than $300 on six tickets, Hawaii News Now first reported.

U.S. Soccer’s match on Sunday against Trinidad and Tobago was canceled less than 24 hours before it was slated to kick off due to what players — and ultimately the federation — deemed as unacceptable field conditions. A viral photo posted by U.S. goalkeeper Hope Solo on Saturday showed the seams between the turf at Aloha Stadium being pulled up by players.

Reached Wednesday by The Equalizer, a U.S. Soccer spokesman said the federation does not comment on ongoing litigation.

Roughly 15,000 tickets had been sold for the match ahead of timing, likely putting the lost ticket revenue alone somewhere in the range of $500,000. U.S. Soccer and Aloha Stadium officials have said that all tickets will be refunded.

[MORE: USWNT details why match in Hawaii had to be abandoned]

Lawyers filing the class-action lawsuit stated that refunds for tickets don’t cover the travel which fans had paid for to come from other Hawaii islands and the mainland United States to see the match. U.S. Soccer released a statement that the match was cancelled at approximately 12:30 a.m. local time on Sunday, less than 15 hours before scheduled kickoff.

“If we’re successful in establishing that these acts of these defendants constitute unfair and deceptive trade practices,they would be entitled to treble damages, not just the refund they got,” Faria told Hawaii News Now.

Consternation remains as to why the match was so suddenly abandoned. U.S. Soccer told The Equalizer on Sunday that Aloha Stadium’s field was inspected for the first time on Saturday, when the women’s national team trained on it for the first time.

“We had a series of mistakes involving this game,” Gulati told the New York Times. “We screwed up. It won’t happen again.”

But stadium officials contend that the field was inspected by U.S. Soccer on Thursday and not issue was taken then. Midfielder Megan Rapinoe tore her ACL on Friday on a grass practice field which players also detailed as below par. In a team-authored essay, the players detailed their issues with the Aloha Stadium turf:

“There were sharp rocks ingrained all over the field. They were everywhere. The artificial turf was actually pulling up out of the ground, and the turf itself was both low-grade and aging. This was a playing surface that looked like it hadn’t been replaced in years.”

Honolulu was supposed to be the seventh of 10 stops on the United States’ World Cup victory tour. Eight of those games were played or are scheduled to be played on artificial turf, including Thursday’s match against Trinidad and Tobago at the Alamodome in San Antonio, a turf field on which Australia’s Kyah Simon tore her ACL in 2013 and U.S. forward Alex Morgan’s initial ankle injury in 2013 became a seven-month injury after it developed into a stress reaction.

Per reports, the U.S. women and U.S. Soccer haven’t taken issue with the San Antonio turf this time around.

Rich Nichols, the general counsel for the U.S. Women’s National Team Players Association, said the incident in Hawaii is part of bigger issues facing the U.S. women’s team, particularly in regards to turf.

“Sometimes you get to the point where enough is enough,” he said. “When they arrived at the stadium that Saturday, that was about it.”

Nichols says that he and players have been told by U.S. Soccer that there will not be any games played on artificial turf between January and the Rio Olympics, which start in August.

The final game of the victory tour in also on artificial turf, at the Superdome in New Orleans. That game against Chinag will be world leading goal-scorer Abby Wambach’s final competitive match. Sunday’s game against China in Glendale, Ariz., will be played on grass.

All of these issues follow a drawn-out fight by players — led by Wambach and U.S. teammates — fought FIFA over the use of artificial turf fields at the 2015 Women’s World Cup, taking legal action in Canada over what they called gender discrimination before ultimately giving up the fight last January.