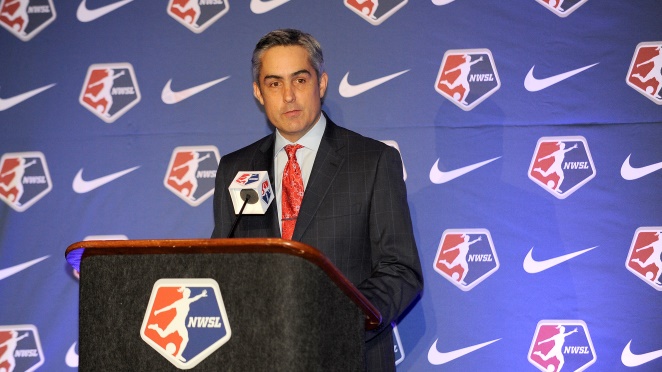 NWSL commissioner Jeff Plush says the league hopes to include 14 teams by the year 2020.

Plush, made the statement while speaking to a crowd at a women’s soccer conference in San Diego on Monday. A league spokesman confirmed to The Equalizer that the comments were indeed made by Plush.

It’s more than reasonable to expect that those potential teams would be added in pairs, in order to maintain an even number of teams in the league. The NWSL started as an eight-team league in 2013 and added the Houston Dash as an expansion team ahead of the 2014 season. These past two seasons have seen the league compete as a nine-team league, forcing bye weeks for at least one team every week.

Plush has previously alluded to the potential for conferences as more teams are added, so the West Coast seems like a natural place to expand. Plush previously said that up to a dozen potential cities had some level of communication with the NWSL. So, outside interest in the league is purportedly there. The big question regarding the addition of four more teams would surround diluting the talent pool.

Canadian Soccer Association president Victor Montagliani recently opened the door on the idea of Canada-based teams joining the NWSL in the near future. Canada is one of three founding federations of the NWSL, along with the federations of the United States and Mexico.

“Yes, there has been discussions and there is interest,” Montagliani said.  He continued: “I think the next evolution would be to look for a franchise or two out of Canada to be a part of that league in the next year or two.”

With US career over, Chalupny retires from Red Stars
Class-action lawsuit filed over USWNT cancellation