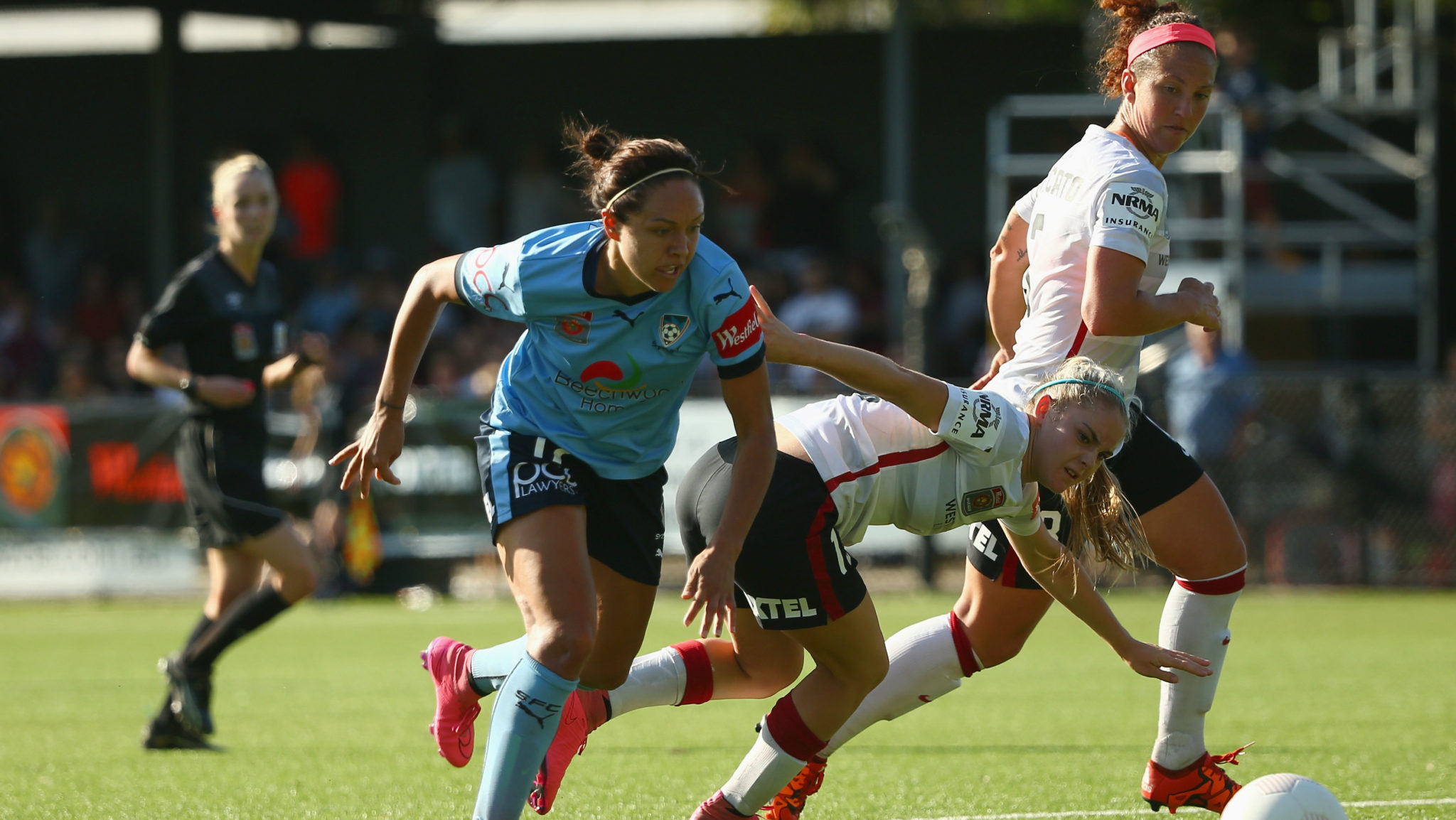 There was a full schedule of matches this weekend in round eight of the Westfield W-League, including two derby matches. Here’s how things went across Australia…

Canberra United 2-0 Brisbane Roar
Canberra United consolidated their hold on second place with a 2-0 home win (4-1-2 W-D-L record for 13 points) over long-time rival Brisbane Roar (2-0-5 for 6 points) on Saturday. Ashleigh Sykes, a 23-year old forward who played in the 2015 Women’s World Cup for Australia, scored two goals to lead her side with four this season and now has 20 goals in 79 W-League matches, all with Canberra. She won a league title with Canberra during their undefeated season in 2011/12 and captured the Goal of the Season award in 2013-14. She was an original member of the side when the W-League started in 2008/09 while still in school.

Kendall Fletcher (Seattle Reign) and Veronica Perez (Washington Spirit) played 90 minutes for Canberra and Lydia Williams (ex-Western New York Flash in 2014) recorded her third shutout of the season while Canberra recorded its fourth. For Brisbane, Claire Polkinghorne (who finished the NWSL season with Portland Thorns), Katrina Gorry (who won a NWSL title with FC Kansas City in 2014), Kristy Yallop (who plays in Sweden and formerly with Pail Blues), Emily Gielnik (ex-Liverpool and Ottawa Fury) and Tameka Butt (ex-Boston Breakers in WPSL Elite) all started the match, with Butt being substituted in injury time. English goalkeeper Carrie Simpson played in lieu of Haley Kopmeyer (Seattle) for the Roar. The Roar remain in 8th and badly need a couple of wins to prevent falling further off the pace and not making the playoffs for the second year in a row—after six straight playoff berths including two Grand Final Wins and three Grand Final Losses.

Adelaide United 1-1 Perth Glory
Adelaide United tied Perth Glory 1-1 on Sunday in a game that was switched from Adelaide’s Coppers Stadium to the Adelaide Shores Football Centre because the turf temperature exceeded safety levels set by the federation. The game was played in very warm and windy conditions. Shawn Billam scored in the 7th minute for Perth while Alexandra Gummer scored for Adelaide in the 75th minute, directly from a corner kick. Americans Sarah Killion (Sky Blue) and Abby Dahlkemper (WNY) played 90 minutes for Adelaide while Nikki Stanton (Sky Blue) and Vanessa DiBernardo (Chicago Red Stars) did the same for Perth. Killion’s Sky Blue FC teammate and Australian international Caitlin Foord also played the full match for Perth. With the win, Adelaide moved back into a tie for fourth and a playoff spot with idle Newcastle Jets on a 2-3-2 record for 9 points, while Perth Glory is tied for sixth with Western Sydney on 2-2-3 for 8 points.

Melbourne City 4-0 Melbourne Victory
Melbourne Victory’s sole win of the season came last weekend with a surprising 3-1 road victory in Perth, but that win seemed an anomaly for the season as they lost their sixth game out of seven, falling 4-0 to undefeated Melbourne City (7-0-0 for 21 points). City had two goals from Lisa Crummer (an Australian international who leads the league with ten goals), with singles from defender Jennifer Beattie (her first goal of the season) and midfielder Kim Little (her fourth of the season). Beattie is a Scottish international on loan from parent organization Manchester City. Beattie played with Montpellier in France for two years after spells with Arsenal and Celtic in her home country. Current NWSL players Stephanie Catley (Portland), Jess Fishlock (Seattle) and Little (Seattle) all played 90 minutes for City, while American Christine Nairn (Washington) went 90 minutes for Melbourne. Lisa De Vanna recorded two assists for City.

Sydney FC 2-2 Western Sydney Wanderers
In Sydney, Sydney FC Sky Blues tied the Wanderers of Western Sydney 2-2 to now sit alone in third place (3-1-3 for 10 points), with the Wanderers two points back, tied for 6th (2-2-3 record on 8 points). Boston Breakers forward Kyah Simon and Alanna Kennedy scored for the Sky Blues while Hannah Beard scored her first of the season for Western Sydney and Elizabeth Grey snatched the points with a tying goal in the 84th minute, her second tally of the season. Michelle Betos (Portland) saved a penalty from Keelin Winters (Seattle) late in the first half, with both Americans playing the entire match, along with Jasmyne Spencer (Orlando) and Simon for Sydney FC.

Newcastle had an bye week.