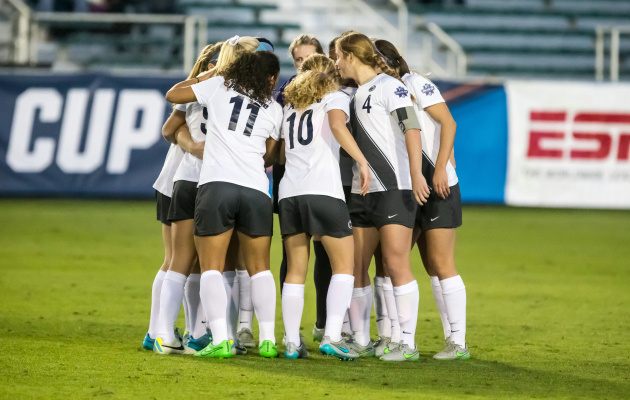 The College Cup final is here, and either Penn State or Duke will win its first NCAA Division I women’s soccer championship.

The final will be contested at noon ET at WakeMed Soccer Park in front of an expected sellout crowd of over 11,000 fans, a number swelled by the game’s close proximity to Duke’s campus and by a youth tournament in town.

Here are five things you need to know about the College Cup final:

Penn State is now the only remaining team in the tournament that hasn’t allowed a goal. While playing 450 minutes of shutout soccer is certainly impressive, Penn State’s offensive production has been eye-catching as well. In the five tournament games the team has played, the Nittany Lions have racked up 19 goals.

While playing some of the lowest teams in terms of RPI in the first two rounds of the tournament undoubtedly helped cushion that total, the Nittany Lions proved in the last two rounds that they can produce even against the best defensive teams in the nation.

[GORDON: Is this finally the year that Penn State wins it all?]

The last two teams in Penn State’s path to the final were West Virginia and Rutgers, both of whom were ranked in the top-five nationally in goals against average. These two foes, who accounted for three of the defensive 2015 All-American honorees, rarely allowed goals all season. Penn State didn’t just find the back of the net but found it twice in both contests. Rutgers and West Virginia allowed multiple goals in just three contests apiece this season, with two of those three contests for Rutgers coming against the Nittany Lions.

When asked about the team’s gaudy offensive numbers, Penn State forward Frannie Crouse brought it all back to the team’s defense.

“Our attack comes from how well our defense is playing and how unified we are as a team in our defense,” she said. “If we don’t have to defend that much, it gives us more of an opportunity to have an offensive attack.”

It’s good news for the Nittany Lions’ offense then, that no team in the tournament has played better defense.

Duke junior forward Toni Payne shined in the second semi-final, assisting the game-winner and adding another before time expired to send the Blue Devils to the final. Payne, much like Florida State’s Chenya Williams, drew the attention of multiple defenders while on the attack, but the reason that Duke advanced is that Payne played the perfect ball to her teammate Kayla McCoy, who gave Duke the lead and ultimately the victory with a calm far post finish.

“You look at the stats in the regular season, there weren’t a lot of goals or assists, but everybody at this table and back at our hotel knows exactly what Toni Payne means to our team,” Duke head coach Robbie Church said Saturday. “The bigger the game, the better Toni plays. At this point, when we got to the tournament, there was no doubt in my mind that she was going to be one of our top attacking players because she thrives in that type of environment.”

All but one of Payne’s goals this season have come in the tournament. Payne and sophomore Imani Dorsey used their speed and ability to go at players to put the Seminoles under intense pressure on the counter.

Duke’s counterattack tactics managed to twice break down a team which has made five straight College Cups with solid defending as its calling card. In Saturday’s press conference ahead of the championship game, Penn State head coach Erica Walsh called Duke “one of the finest counter-attacking teams” she’s since in a long time.

Can Duke’s counterattacking be effective on Sunday? Penn State’s high-pressure style of play effectively nullified the Rutgers’ ability to counter. Penn State’s attacking line made it difficult for Rutgers to find any space to start an attack. The Scarlet Knights were limited to a single shot on goal in the contest.

Playing in the ACC, Duke has, of course, faced high-pressure teams. In fact, sophomore goalkleeperkeeper E.J. Proctor in their biggest loss of the season against Virginia Tech taught them how to deal with high pressure.

“That game as much as it hurt,” Proctor said Thursday, “It definitely helped us prepare for teams in the future who pressed us as hard as they did.”

Will a hard-learned lesson in the middle of the seasons, pay dividends for the Blue Devils?

No matter who wins Sunday, it will mark the third straight year that a first-time champion has been crowned. That is something that’s never happened before in the history women’s college soccer. In fact, North Carolina has never gone three straight years without winning a championship — until now. Moreover, a different team has won the title each of the last six years.

What does that mean for women’s soccer? It’s a sign of increasing parity in a sport that has seen little since the first NCAA Championship was held in 1982.

Church said Saturday that such a fact is exciting for the sport. Church noted there are more teams than ever with a realistic chance of competing for a title, rather than the handful of programs capable of winning in the past.

“Obviously the (North) Carolina dynasty is huge,” Church said. “I think it was great for our sport. I think drew a lot of attention to our sport… but I think now, as we move forward, I think this is next stage.”

As women’s college soccer readies to start its next act, the only remaining question is, ‘Which team will take center stage Sunday?’

At this point in the season, the fine, seemingly small details determine the outcome of games. On Friday night, Penn State provoked Rutgers, arguably the best defensive team in the country, into making two mistakes that directly led to both of the Nittany Lions’ goals. On the first goal, Crouse pounced on a miscommunication by the Rutgers defense that left the ball dangling in no-man’s land just inside the penalty area. The second goal came off a set piece that bounced around the box a bit before Kayleigh Riehl was able to slot it away. Before Riehl’s shot, the Scarlet Knights had several chances to clear the ball, but failed.

What does this mean for the final? After the victory against the Seminoles, Church admitted his side struggled for the 15 minutes of that game and relied on Proctor to keep the scoreline level. Given Penn State’s prowess at making sides pay for mistakes, the Blue Devils will need to come out stronger in the Final if they hope to upset the Nittany Lions.

The level of play during the championship game tends to be lower than that of the semifinals due to the quick turnaround between games. Generally, the games are uglier and tend to be decided by a mistake committed by the vanquished foe rather than an excellent display of soccer by the victorious side.

Duke and Penn State play two very different styles. Penn State suffocates teams with loads of possession while Duke focuses on looking to break on the counter. As different as they are, they are similar in a couple of respects.

The most obvious is that the sides both have stout defenses. The teams are also loaded with young talent, which should leave supporters of their teams optimistic about the future no matter the result. Duke will return 10 of 11 starters next year, while Penn State will return eight.

For these sides, young players don’t just start but play important roles as well. For Duke, it’s top two goal scorers, Taylor Racioppi and McCoy, are freshmen. Proctor, who kept Duke in games at times this season, has two years of eligibility remaining.

Among the expected returnees for the Nittany Lions is their entire backline made up of freshmen and sophomores. In Friday’s win over Rutgers, Walsh praised Kayleigh Riehl, saying that center back “played like a 25-year-old veteran rather than an 18-year-old freshman.” Riehl’s technical ability was on full display on Friday as a composed left-footed shot gave the Nittany Lions an insurance goal.

In short, it wouldn’t be surprising if these two teams faced each other again late in the season next year. The pieces are certainly in place for that to happen.