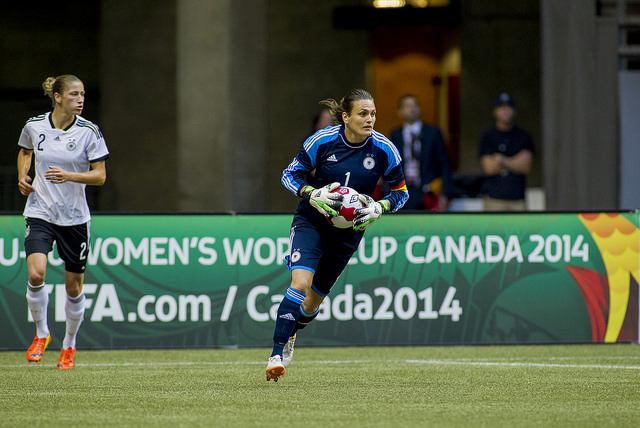 Portland Thorns FC are bringing Nadine Angerer back to the club as goalkeeper coach for the 2016 season.  The former Ballon d’Or winner spent the last two seasons as a goalkeeper for the Thorns.  She retired from international soccer following Germany’s loss to the United States in the World Cup semifinals and from club soccer after the Thorns’ NWSL season.

“I’m very happy to be coming back to Portland,” Angerer said in a statement.  “Over the past two years, Portland has become my second home.  I am very thankful that the Thorns have given me the chance to share my knowledge with our goalkeepers.  It’s a dream come true.”

Currently the only goalkeeper on the Thorns roster is Michelle Betos.  Last season Betos wrested playing time from Angerer and wound up as the NWSL Goalkeeper of the Year.  The Equalizer first reported that Adrianna Franch is heading to the Thorns via a discovery and trade, but there has been no formal announcement regarding Franch and the Thorns.

“Nadine is a first-class professional who will bring invaluable experience and knowledge to the coaching staff,” Mark Parsons, head coach of the Thorns, said.  “She will be very important to the goalkeepers and the whole team as Nadine is a winner and knows what it takes to be the best, day in and day out.”

Among Angerer’s career highlights is playing the entirety of the 2007 World Cup — 540 minutes — without conceding a goal.  That was Germany’s second consecutive World Cup triumph.  Angerer was the backup on the 2003 team.