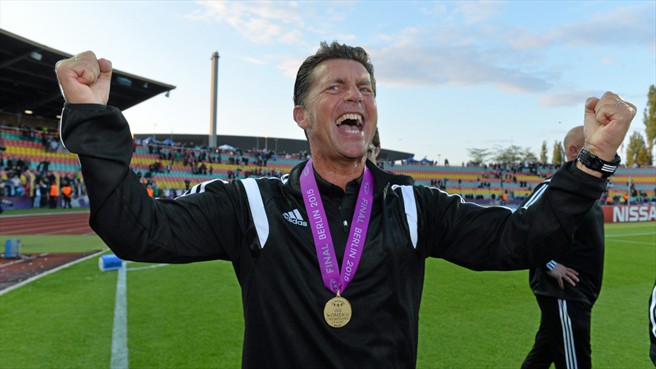 Seven months after leading FFC Frankfurt to the UEFA Women’s Champions League crown, coach Colin Bell is leaving the club. The separation comes by mutual consent, according to FFC Frankfurt. Bell’s contract will be void at the end of the year, the club said in a statement.

Bell will take over as manager at Norwegian Toppserien club Avaldsnes IL, his agent confirmed Tuesday. Avaldsnes finished runner-up in 2015 to earn a spot in the Champions League qualifying round for the 2016-17 UWCL season.

Bell recently made the 10-person shortlist for FIFA Women’s World Coach of the Year, but he was not named as one of the three finalists.

“I had a great time at 1. FFC Frankfurt and am very proud to have and grateful cooperated with our great team and dedicated support team,” Bell said in a statement. “I wish the 1. FFC Frankfurt and previous players all the best and will remain linked to the club. After the beautiful and successful time in Frankfurt, it is easy for me now important to adopt a new challenge and reorient myself professionally.”

Frankfurt assistant coaches Matt Ross and Kai Rennich will take over training for the team, which currently sits fourth in the Frauen-Bundesliga, taking 16 points from nine matches. Bayern Munich lead the league with 25 points. Frankfurt will face Swedish champions FC Rosengård in March in the quarterfinals of this season’s UEFA Champions League competition.