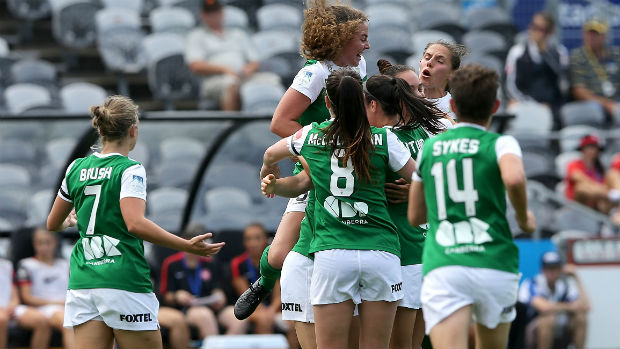 Adelaide United lost on the road to Sydney FC, 1-0 on Friday. American Jasmyne Spencer, on loan from the Western New York Flash, scored the lone goal in the 68th minute. With the win, Sydney (3-0-3, 9 points) leapfrogged Adelaide United (2-2-2, 8 points) in the standings. At the end of the weekend, Sydney was tied with Newcastle for third on 9 points, while Adelaide fell from second to fifth, out of the top four playoff spots but only one point behind with six games left.

Melbourne Victory finally won its first game of the season, defeating Perth Glory 3-1 on the road after five consecutive losses. Washington Spirit teammates Christine Nairn and Hayley Raso combined in the 9th minute, with the American midfielder Nairn delivering a free kick to the Australian international Raso, who finished for the early lead. Nairn scored herself on another free kick just before the end of the first half. Shannon May scored a late goal for Glory before substitute Whitney Knight put the game out of reach for the Victory, on an assist by newly acquired English international forward Natasha Dowie, on loan from Liverpool. Dowie is a potent goalscorer at home in the FA WSL and surprisingly has not been selected for the last two Women World Cup teams. Her acquisition, combined with the win against Perth, could still power the Victory to a playoff berth, which they have managed in their past five seasons, which included their lone Grand Final victory in 2013-14. Nikki Stanton (Sky Blue FC) and Vanessa DiBernardo (Chicago) played all 90 minutes for Perth. Next week, the Victory hosts the second Melbourne Derby against highflying City; the first derby ended 2-1 for the expansion City side.

Western Sydney Wanderers hosted defending champs Canberra United on Saturday, with Canberra leaving Sydney with a 4-1 victory. Kendall Fletcher was another American who scored this week in the W-League with goals in the 14th and 78th minutes to lead Canberra. Keelin Winters (Seattle) and Canadian Carmelina Moscato played all 90 minutes for Western Sydney. Both sides entered the game tied for 3rd on 7 points. Canberra is now in sole position of second place on 10 points and Western Sydney is tied with Perth for sixth place on 7 points. Next week, Canberra hosts Brisbane Roar, which typically is a close-fought, entertaining match between perennial title challengers.

Brisbane Roar entertained Newcastle Jets on Saturday; both teams entered the game tied for 6th on 6 points, and again the road side came away with a win and four goals (a 4-0 win). Americans Caprice Dydasco and Megan Oyster (both of the Washington Spirit) each scored once for the Jets. Seattle’s Haley Kopmeyer was in goal for the Roar. Newcastle jumped to a tie for third with Sydney FC while the Roar is now in 8th place.

Undefeated Melbourne City had the bye and still lead second place Canberra by 8 points, sitting on 18 points from 6 games. Newcastle has a bye next week.