Not with team, Waldrum in limbo as T&T coach 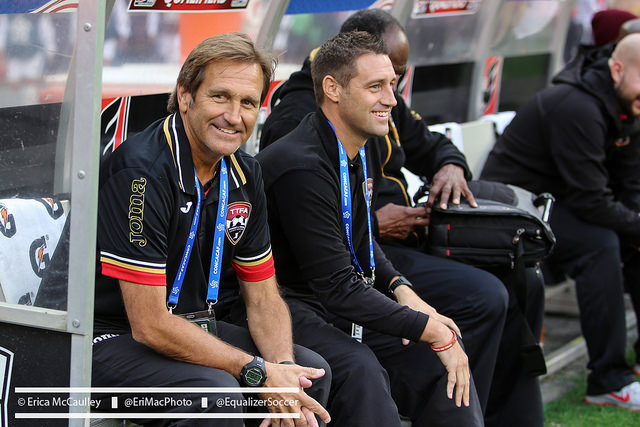 Randy Waldrum is not currently with Trinidad and Tobago. (Photo Copyright Erica McCaulley for The Equalizer)

When Trinidad and Tobago’s women’s national team takes the field on Friday as part of the 2016 Olympic qualification process, Randy Waldrum won’t be there.

Recounting a long story of how he got this point, Waldrum explains that the bigger picture is the issue. Communication between the federation and the team’s coach has been irregular and unproductive, Waldrum said Friday. He was supposed to return to Trinidad to train the team in September, but that got pushed back to late October.

Waldrum went to Trinidad and faced logistical and travel issues while there due to changes within the federation. TTFA president Raymond Tim Kee fired general secretary Sheldon Phillips, but Phillips is back now — at least, for now — since Kee fired him without authority. This all went on while Waldrum tried to train a team which never had more than eight players at a single practice, he says.

The struggles are similar to the ones highly publicized last year before World Cup qualifying. Trinidad and Tobago came agonizingly close to making the Women’s World Cup for the first time, losing an intercontinental playoff to Ecuador in stoppage time of the second leg of the series in Trinidad.

Waldrum has worked for free through what he calls “a handshake agreement” with the TTFA. He says he isn’t even asking for money, just the authority to properly implement a plan for the next four years to get Trinidad and Tobago into the 2019 World Cup.

According to Waldrum, the federation sent him a plane ticket back to Trinidad on Monday at 11 p.m. Houston time. The flight was for Tuesday morning. And the kicker? Waldrum’s last name was spelled wrong (not the first time there has been an error on the plane ticket, he says).

Seeing the issue as never-ending and the scenario as a microcosm for bigger issues, Waldrum said he wasn’t going to come without getting something in writing that he is the team’s coach and he has some authority over to implement plans for staff and players.

But as of now, things are at a standstill with the federation. Players have been texting him wondering when he will come back, he said. And Trinidad and Tobago still has to get through a series of matches just to get to the final round of Olympic qualifying in February. Qualifying will be a longshot with only two spots available from CONCACAF.

Assuming Trinidad and Tobago beats St. Lucia this weekend, Guyana, Puerto Rico and a dangerous Jamaica team await later in the month. And T&T has a pair of games against the United States in December which could end up being very ugly if things don’t improve.

“I would’ve left a long time ago last year if it weren’t for the players,” Waldrum said. He wants to see the program move forward. He knows there is enough talent there to make Trinidad and Tobago more relevant regionally and nationally. But for now, there isn’t enough organization. Waldrum hasn’t heard back from Kee in days, as of Friday morning.

“Right now, I can’t even tell you what’s going on in camp. I’ve had no input.”