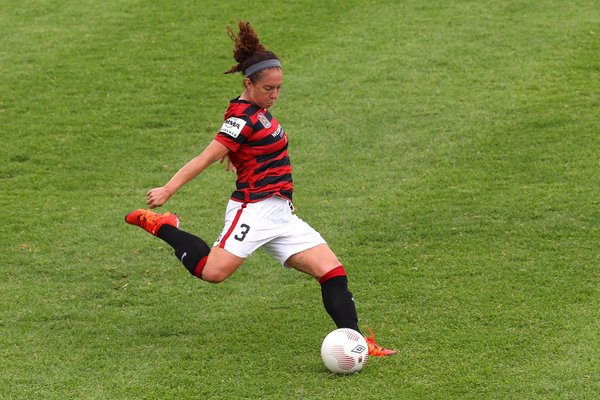 It was wild weekend in the Westfield W-League across Australia as there were penalties awarded, a red card shown to a goalkeeper, and a last-ditch, stoppage-time game-winner. Here’s how the league’s fourth round of fixtures went:

Western Sydney Wanderers 2–1 Newcastle Jets
The Western Sydney Wanderers came from behind on Saturday to earn their first win of the season, defeating the Newcastle Jets 2-1. Newcastle’s Jenna Kingsley struck first in the 3rd minute of play with a header off a cross from Rhali Dobson, but Wanderers’ midfielder Chloe O’Brien equalized in the 57th minute after knocking in the ball off a scramble in front of goal. Just as the match looked like it would end in a draw, Canadian international and Wanderers defender Carmelina Moscato was able to get on the end of a cross in the 92nd minute, and headed in the winner, ensuring the Wanderers the victory. Keelin Winters (Seattle) also played the full 90 for the Wanderers, while Kendall Johnson (Portland) did not play. Caprice Dydasco and Megan Oyster, both on loan to Newcastle from the Washington Spirit, played 90 minutes each.

How about this cracker from Aivi Luik!?

After having a hand in all three of City’s first-half goals and hitting the crossbar with a shot of her own, Lisa De Vanna was shown a red card in the 57th minute for an off the ball incident where she appeared to hit Canberra defender Nicole Begg in the face with the palm of her hand.

The Sydney Morning Herald reported this week that England international Jodie Taylor will not be joining Canberra United after aggravating the knee injury she sustained prior to the World Cup. Canberra is actively looking for a replacement.

Adelaide United 4–0 Melbourne Victory
Adelaide United handed Melbourne Victory their fourth loss of the season on Sunday, leaving the Victory at the bottom of the table with zero points. Rosie Sutton struck first in the 13th minute for Adelaide, and Victory’s Christine Nairn nearly equalized just after with a long-range shot that hit the post. But Adelaide’s attack was too much for the Victory, as Tiarn Powell added a second goal in the 33rd minute and Sutton added a third in the 55th minute. In the 70th minute, Melbourne Victory keeper Melissa Barbieri took down Adelaide’s Marijana Rajcic in the box. Barbieri was shown red for the tackle, and Sutton stepped up and buried the penalty kick, completing her hat-trick. For Adelaide United, Abby Dahlkemper (WNY) played a full 90, and Sarah Killion (Sky Blue) played 73 minutes. Nairn (Washington) and Hayley Raso (Washington) both played 90 minutes for the Victory.

Sydney FC 1–0 Perth Glory
Kyah Simon’s first-half penalty kick proved to be the difference for Sydney FC on Sunday, as they edged the Perth Glory 1-0 for their second win of the season. Sydney FC midfielder Amy Harrison was taken down in the penalty area in the 14th minute, and the referee pointed to the spot. Simon coolly put away the penalty, and despite constant trouble from Perth’s Sam Kerr, the Sky Blues were able to hold on for the win. Goalkeeper Michelle Betos (Portland) started for Sydney FC and earned her first clean sheet of the season, while Simon (Boston) and Jasmyne Spencer (Orlando) both played 90 minutes for Sydney as well. The trio of Sky Blue FC loanees featured in the match for Perth, with Sam Kerr and Nikki Stanton both playing 90 minutes, and Caitlin Foord playing 32 minutes in her return from a hamstring injury that kept her out of last weekend’s fixture.

Brisbane Roar had a bye this weekend.