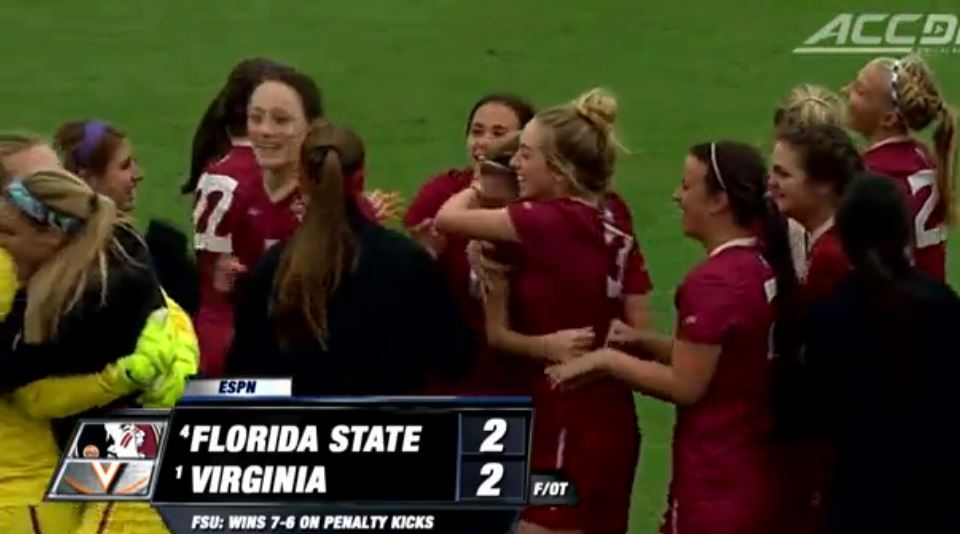 This weekend across the country, Division I women’s soccer teams faced off to earn conference titles and, more importantly, automatic bids to the NCAA tournament, which begins next week. Here’s a short recap of the major conference games as well as a listing of all the teams that won title games:

The highly anticipated matchup between last year’s College Cup participants lived up to its billing. Florida State took the lead on two separate occasions, but Virginia answered each time through Makenzy Doniak. The two national powerhouses battled through extra time but no winner could be found. The ensuing penalties would go seven rounds. In the end, Seminoles keeper Cassie Miller saved Meghan Cox’s attempt and Berglind Thorvaldsdottir converted her own to give Florida State the title. Florida State has now won three straight ACC titles and four of the last five. In a losing effort, Doniak set a new career record for goals with her second on the day. It was her 60th goal, overtaking the previous record held by Angela Hucles.

Butler scored in the 20th minute on a corner kick taken by Serina Kashimoto and that would be all the Bulldogs would need to claim the Big East Title and their first NCAA tournament appearance in school history. Providence out-shot Butler 16 to 4 in the contest but the Friars were unable to convert.

Texas A&M took an early lead in the 23rd minute off a score from Haley Pounds. Both Emily Bates and Mikaela Harvey were credited with assists on the tally. The Gators struck back six minutes later as Brooke Sharpe volleyed in a ball to tie the game at 1-1. Just before halftime, Florida was awarded a free kick outside the penalty area and Christen Westphal scored directly off the free kick with a superbly hit ball. Westphal’s strike would hold up as the game-winner.

Penn State scored twice in the first half to win the Big Ten title at its home field on Sunday over Rutgers. Elizabeth Ball headed in a deflection off a corner kick in the 10th minute to give the Nittany Lions the early lead. Emily Ogle doubled Penn State’s lead in the 26th minute with a rocket from about 20 yards out. Rutgers was held to one shot on goal for the afternoon.

Texas Tech secured its first Big 12 title in program history Sunday with a 1-0 win over Kansas. The Jayhawks had a prime opportunity to take the lead in the first half after Liana Salazar was fouled in the box and was awarded a penalty. Salazar’s ensuing kick was saved by Lauren Watson. The Red Raiders found the game winner late in the second half. An initial shot taken by Red Raiders was saved by Dabner, but Caity Heap collected the rebound and sent the ball back in. Gwennie Puente then volleyed the ball into the net for the score.

Other conference champions and automatic qualifiers for NCAA tournament: