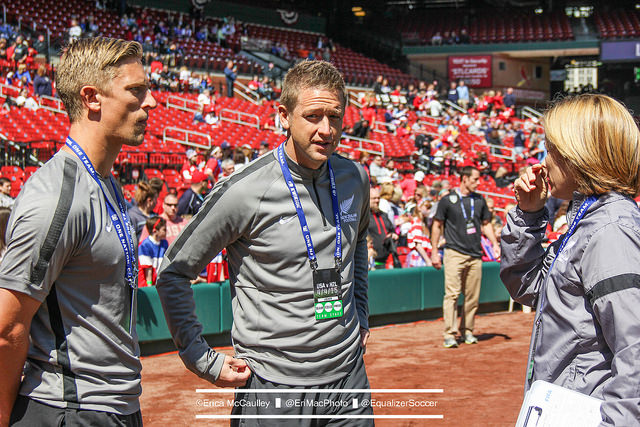 New Zealand coach Tony Readings is confident that the best is yet to come for his young team. Will the Football Ferns thrive at the 2016 Rio Olympics? (Photo Copyright Erica McCaulley for The Equalizer)

VANCOUVER, British Columbia — New Zealand is an ever-growing and developing country when it comes to women’s soccer. The Football Ferns, currently No. 16 in the FIFA rankings, were able to show great promise at the World Cup as they played in a challenging Group A. Coach Tony Readings saw his players pick up draws against Canada (0-0) and China (2-2). An opening-match loss to the Netherlands ultimately prevented New Zealand from advancing from the group stage. New Zealand is poised to continue progression and player development as the the Football Ferns look to qualify for the Rio 2016 Olympics.

Readings and his coaching staff were in Vancouver recently for a professional development opportunity with the coaches of Major League Soccer’s Vancouver Whitecaps FC. Readings graciously made himself available for an interview and discussed New Zealand’s World Cup, and what’s to come in the future for the Football Ferns.

How was the overall experience of coaching New Zealand at the World Cup?

READINGS: We knew going into the tournament that it was going to be the biggest World Cup that there had been and I think it didn’t let down. I think for us, we enjoyed our time, we didn’t enjoy the fact that we went home at the group stage, but we enjoyed our time in Canada and it just left us really hungry now for the Olympics.

What kind of lessons do you and the team takeaway from being at the World Cup?

READINGS: We felt that we competed really well in every game. We probably could have won every game, on another day. We’ve said that for a little while now. For us, it’s going to be turning those good performances into a result or playing badly and winning. We seem to play well and not win. For us, that’s going to be around taking more chances. We created a lot of goal-scoring chances at the World Cup, but we never took them. Our players are working hard on that in their own environments. We don’t see them because they’re based overseas, but yeah it’s going to be them working hard and when we get back together again, then it’s just making sure the group are working as well as we can to create them, and the players doing the best they can to take them.

What is the future looking like for the Football Ferns?

READINGS: It’s looking good because we did well at the World Cup. We got the most points we got, which wasn’t enough for us, but the squad is still quite young. If you look at our goalkeeper is 22 (Erin Nayler), our captain is 25 (Abby Erceg), and our center back (Rebekah Stott) is 22 years old, so it’s a pretty young team. We performed well and we’re very close to being very good. With a little bit more experience and some more games and just some small improvements in certain areas, we’ve got a lot more potential yet to realize.

New Zealand have not played any matches since the World Cup. How are you preparing for your Rio 2016 Olympic qualifying matches against Papa New Guinea?

READINGS: Well, we haven’t been together as a team since the World Cup. We are hoping to get some games maybe before the end of the year to prepare for the qualifiers. Our players are playing in some of the best leagues in the world. We’ve got girls in the Bundesliga, Japan, in Sweden. We’ve got Abby Erceg in the U.S.A. so they’re all playing and they’re competing. It’s a shame we haven’t been together since, and that’s a big problem for us as a team, but it’s one we’ve always faced. When we do come back in we expect it to be quite fresh and new. We are training a group of players in Auckland and then will just make sure we’re managing the players overseas, but they’re all training hard in their own environments.

When is the fixture series against Papa New Guinea?

READINGS: It hasn’t been decided yet so we’re not sure. It’ll be next year sometime I would imagine, but yeah it’s not been confirmed yet.

Maybe in February or March?

What would it mean for New Zealand to qualify for the Rio 2016 Olympics?

READINGS: Yeah, it would be great. A lot of the team have been to two Olympics already and we got better and better the first time we went. We got a point against Japan and the next time we got our first win and got through to the quarterfinals. This time we want to go further than that. We’ve got to do well in our group because we want to make sure we get a nice game in the quarterfinals. Once you’re in the quarterfinals you’re only one game away from a medal. That’s going to be what our aim is when we go there. If we can keep improving like we have done at the last World Cup and Olympics then we’re going to be in good position to do that.

Will New Zealand be participating in the Algarve or Cyprus Cup next year?

READINGS: Yeah, we would like to play in those if the qualifiers don’t clash because they’re really good tournaments for us and you get four games, good quality teams. We would really like to. We don’t get to play in many tournaments. It’s always good to play more and more tournaments of football so we’d like to.

READINGS: Not yet. Not yet, no. I’m sure we’ve both been really busy since then, but I’m sure we’ll do it at some point.