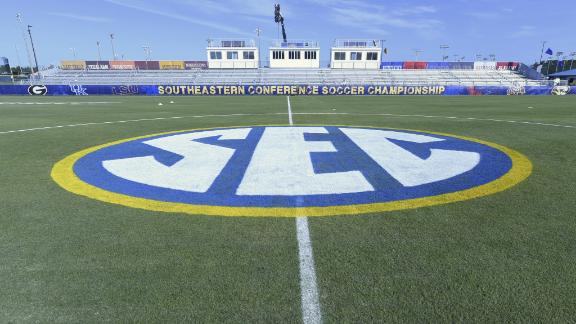 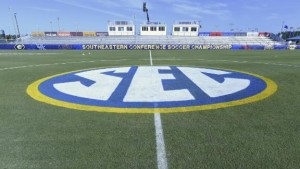 While it doesn’t seem possible, the regular season is over and it’s now conference tournament time for women’s soccer, this week is exciting as teams vie for automatic bids to the NCAA Tournament.

For some teams, there is a lot more on the line than hardware.  For many teams winning their respective conference tournament, it is their last hope for an NCAA bid. Even for teams that have a NCAA tournament berth presumably locked in, their performances could certainly impact their ranking and who they will face. In short, the stakes are raised and the margin of error is slim. Welcome to November.

The SEC tournament is for lack of better word, overwhelming. With a 10-team field, the table is set for the possibility of some intriguing upsets.There is also, however, the possibility of fatigue and injury playing that many games in such a short amount of time.  It is the Hunger Games of women’s soccer tournaments.  On top of the format, the conference has been rather unpredictable this season, and there’s no reason to think that will stop now.

Florida took the SEC regular-season title and the Gators are certainly top contenders to take the postseason SEC crown as well. Savannah Jordan leads the Gators with an impressive 19 goals and Brooke Sharp has tallied 10, making them the most deadly duo in the conference. The Gators’ biggest weakness is in goal. Florida switched keepers midseason and their current netminder, freshman Kaylan Marckese, has made some costly mistakes in goal for the Gators, specifically deciding when or when not to come off her line.

When everything shakes out at the end of the regular season, people tend to forget how close a different outcome was to being reality. Florida snatched a victory from the jaws of a tie against South Carolina late in the season, and Missouri star Candace Johnson missed a penalty kick in the team’s regular-season finale against Texas A&M.  The missed penalty kick cost the Tigers a share of the regular-season title. Add it all up and Missouri was excruciatingly close to their first SEC regular-season title outright. Will they be able to redeem themselves in the conference tournament?

Another interesting element of the SEC tournament is that traditional top teams, South Carolina and Texas A&M, find themselves in the middle of the tournament bracket. No doubt their seeding is in large part due to the departure of critical players from last year’s teams, especially for the Aggies. Can these teams put it together and make a run at the conference title?

Which other conference in the country could have a four-team tournament in which all participants are currently ranked in the top 10? The answer is none and that may in and of itself be reason enough to tune into the ACC tournament next weekend. While all four of these teams are certainly capable of hoisting the trophy, be prepared for another Florida State vs. Virginia matchup (we already warned you about that here). In the last three years, no two teams have been as consistently good as these two. Virginia won the first meeting this season off a wrongly awarded penalty kick and send-off, so if a rematch does happen expect an epic showdown.

Perhaps one of the most surprising stories out of the ACC is the struggles of North Carolina, the most storied program not only in women’s soccer history but possibly college sports history. The Tar Heels lost three straight conference games this season, something nearly unheard of for the program. Granted, the ACC is a crucible of a conference, but the Tar Heels had previously only lost three straight on two occasions. Can the Tar Heels redeem themselves?

West Virginia has won the Big XII tournament every year since they’ve joined the conference and it doesn’t look like this year will be any different. Led by junior Kadeisha Buchanan, the Mountaineers defense has been one of the most stingy in the entire country, limiting opponents to 0.29 goals per game. The program is riding a 15-game unbeaten streak with their lone loss of the season coming against Virginia Tech back on August 23rd. It will certainly be a challenge for any conference foe to stop West Virginia in its quest for a fourth straight Big XII title.

One of the most intriguing of the entrants in the field is Texas Tech. The Red Raiders haven’t lost a ton of games, but their inability to break deadlocks have left them with the 4th seed for the tournament. If Canadian starlet Janine Beckie can deliver, the Red Raiders could find themselves holding the trophy next Sunday.

The quarterfinals of the Big Ten Tournament were played Sunday, with Penn State, Rutgers, Michigan and Ohio State all advancing. Shockingly, the co-champions of the Big Ten regular-season, Wisconsin, were upended by Ohio State. Penn State now looks poised to grab another Big Ten women’s soccer championship. With a very strong midfield, a young but solid backline and a potent attack, Penn State is certainly the team to beat in the Big Ten.

Rutgers, who is currently leading the nation in goals against average, also has a good shot at lifting the trophy as well. Led by All-American center back Brianne Reed and Casey Murphy, one of the country’s best goalkeepers, scoring against the Scarlet Knights will be a tough ask for any of their opponents in the tournament.

St. John’s secured its first regular-season title in conference history and now looks to complete the double. If they are to complete the feat, there may be no better time for the program.  Rachel Daly, who has drawn warranted comparisons to Kelly Smith during the latter’s days at Seton Hall, has been unstoppable much of the season. She has 19 goals this season, nine of which have been game-winners. Defensively, St. John’s is led by fellow Brit Georgia Kearney-Perry and goalkeeper Diana Poulin, who won defender of the year and goalkeeper of the year in the Big East, respectively.

Rounding out the top three in seeding for the tournament are Georgetown and DePaul. A season ago,  head coach Erin Chastain led a young DePaul team to an undefeated run through the regular season and conference tournament. It would have been very improbable for DePaul to make that kind of run again, but the Blue Demons have outscored their opponents 40-12 and have held their opponents to a 0.60 goals against average. The Hoyas, meanwhile, have been a bit up and down this season, but are unbeaten in their last last five. Georgetown also bested regular-season champions St. John’s, 3-1 when they met back in early October. If the Hoyas can put it all together, they’ve got a shot at being the last team standing.

Other Conferences to keep an eye on

The Colonial Athletic Association has long held some of the best programs outside the traditional powerhouse conferences. It seems like every school has one or two dynamic players that are enjoyable to watch and seem poised get a shot at playing professionally. For example, Hofstra’s Leah Galton has spent the past four years terrorizing opponents’ backlines and has indicated she’ll declare from the NWSL draft.

This conference contains two Top 25 teams in Connecticut and South Florida and another team, Central Florida, that’s currently receiving votes in the NSCAA poll. Given that level of talent, it’s worth tuning in to see these three and five others battle it out for the hardware. Like the CAA, the league also has a number of exciting players to watch, including Connecticut’s Rachel Hill.