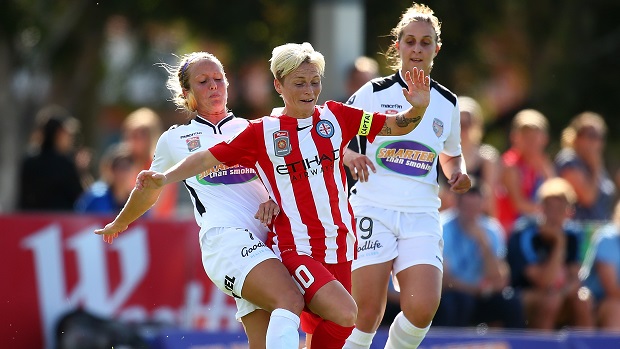 The Westfield W-League season continued this weekend with the league’s third round. After missing the second round of fixtures due to international friendlies against England (1-0 loss) and China (1-1 draw), Australian internationals returned to their clubs this weekend. Here is how things went across Australia:

Newcastle Jets 1-0 Melbourne Victory
With a 1-0 loss to Newcastle Jets on Saturday, Melbourne Victory remain at the bottom of the W-League table with zero points after three rounds of fixtures. Chloe Logarzo scored Newcastle’s goal in first-half injury time. Christine Nairn (Washington) played 90 minutes for the Victory after returning from U.S. national team duty, and came close to scoring in the first half off a set piece, and again in the second half on a long range effort from 35 yards out. Washington Spirit defenders Caprice Dydasco and Megan Oyster both played 90 minutes for Newcastle, and Hayley Raso, also on loan from Washington, played 84 minutes for Melbourne Victory.

Melbourne City 4-0 Perth Glory
Melbourne City continued their impressive start to the season with a 4-0 win over Perth Glory, with goals courtesy of Lisa De Vanna, Marianna Tabian, and a second half brace from Larissa Crummer. Melbourne City sits in first place with nine points. Jessica Fishlock (Seattle) played 90 minutes for City, as did Stephanie Catley (Portland), and Kim Little (Seattle) came on for the last 27 minutes of the match. Sky Blue FC’s Sam Kerr hit the crossbar twice for Perth, while teammate Caitlin Foord did not play due to a hamstring injury. Sky Blue FC midfielder Nikki Stanton also played 90 minutes for Perth.

Sydney FC 2-1 Western Sydney Wanderers
Sydney FC edged the Western Sydney Wanderers 2-1 in the first Sydney derby of the 2015-2016 season. Leena Khamis recorded a first half brace for Sydney FC, and while Liz Grey was able to pull one back for the Wanderers in the 87th minute, they could not find an equalizer. Kyah Simon (Boston) and Jasmyne Spencer (Western New York) both played 90 minutes for Sydney FC, while goalkeeper Michelle Betos (Portland) did not feature in the match, after starting in goal for Sydney FC’s first two matches of the season. Canadian international Carmelina Moscato played 90 minutes for the Wanderers, as did Keelin Winters (Seattle). Kendall Johnson (Portland) was subbed off for the Wanderers after 32 minutes.

Adelaide United 2-1 Brisbane Roar
Adelaide United handed Brisbane Roar their first defeat of the W-League season this weekend. Adelaide’s Rosie Sutton scored from close range in the 10th minute, but Katrina Gorry got the equalizer for Brisbane in the 23rd minute. Emily Condon scored the winning goal for Adelaide in the 52nd minute. There was some NWSL presence in this match as well, as Abby Dahlkemper (WNY) and Sarah Killion (Sky Blue) both played 90 minutes for Adelaide, while Clare Polkinghorne (Portland) played 90 minutes and goalkeeper Haley Kopmeyer (Seattle) started for Brisbane.

Canberra United had a bye this weekend.

Next week, Melbourne City look to remain perfect with a trip away to Canberra United, while Melbourne Victory look for their first points of the season at home against Adelaide United. The Western Sydney Wanderers will travel to play the Newcastle Jets, and Perth Glory visits Sydney FC. Brisbane Roar has a bye.