Forecasting a rematch: More in store for FSU, UVA

Florida State and coach Mark Krikorian lost to Virginia on Sunday, but the two teams are likely to meet again soon. (Photo Copyright Steve Bruno for The Equalizer)

CHARLOTTESVILLE, Va. — When an official’s blown call ultimately decides a game, often the rest of the contest gets overshadowed. When the matchup is as tantalizing as then No. 1 Florida State and No. 2 Virginia, it’s really a shame.

There’s no denying that the referee was wrong Sunday when he called Florida State’s Kirsten Crowley for handling the ball inside the penalty area. Review of the play undeniably shows that the ball hit Crowley’s hip and not her arm. The goal ended up being the only one of the match, lifting Virginia to a 1-0 victory.

To observers, what didn’t happen after Virginia’s Alexis Shaffer converted the ensuing penalty kick should be the real takeaway from the game. Despite being down a player for approximately two-thirds of the match, the Seminoles didn’t concede another goal to one of best teams in the nation.

“To be able to hold such a potent attack to not allow any goals when we are playing with 10 players for so long, I thought that was quite good,” he said. “I thought our goalkeeping came up big. Our defenders came up big a couple of times.”

This is even more remarkable when you consider that just three days prior, FSU battled 110 minutes to earn a draw against a very physical Virginia Tech team. Florida State also dealt with losing some of the team’s biggest players to international call-ups. Notably, the team was without two of its defensive stalwarts, Megan Campbell and Emma Koivisto.

While a one-point weekend has is the worse haul for the Seminoles in quite some time, these last two games show why Florida State has a legitimate shot at capturing back-to-back titles. Even with the difficult circumstances, the Seminoles are still able to compete against the best in the nation.

Of course, the Cavaliers were without some important players as well. Emily Sonnett, the team’s defensive leader, started for the U.S. national team against Brazil about 90 minutes after the Virginia vs. Florida State match kicked off. Additionally, Megan Reid and Hana Kerner were unavailable. 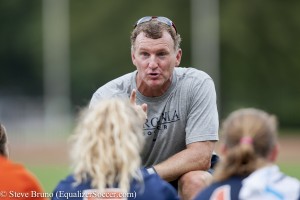 Despite the absences, Virginia was a bit disappointed not to add to the lead after the penalty kick and playing a player up for the bulk of the match.

“We just didn’t finish enough of our chances to make it [a] case where it was a definitive win,” Cavaliers head coach Steve Swanson said. “Having said that, I think we had a lot of players step up today especially in some players absence. It was great for our team.”

It’s true, the inability of Virginia to cushion its lead was from a lack of trying. Several times on Sunday, the Cavaliers peppered the goal with shots, only to have them go off target or be saved by the Florida State defense.

Nonetheless, last season every loss on the Cavaliers’ record came at the hand of the Seminoles. Twice they lost championships to the Seminoles, first in the ACC title game and then in the national championship. Psychologically, Sunday was a big win for Virginia. It gives the Cavaliers a boost of confidence on the eve of postseason play.

“This game doesn’t win us anything,” junior goalkeeper Morgan Stearns said postgame when asked about the victory. Her statement is something that the Cavaliers don’t have to be reminded of.

In addition to losing to the Seminoles in two championships games a season ago, the Cavaliers were also perfect in 2013 until they fell to Virginia Tech in the ACC semifinal game. Virginia’s only other loss that year came at the hands of UCLA in the College Cup semifinal.

If the Cavaliers are going to earn some hardware this season, it seems likely that they will have to face Florida State again. The prospect of a rematch is something both sides alluded to Sunday, especially for the ACC title. With the ACC moving to a condensed four-team championship format, a rematch of last Sunday’s contest could very well happen next weekend.

With each side returning key personnel that were missing from Sunday’s matchup, a potential rematch should be a highly entertaining affair. Even without some their best stars, last weekend’s matchup was played at a level few other college sides could match, even at full strength. If they do meet again, hopefully this time around focus will remain on the play and not the officiating.