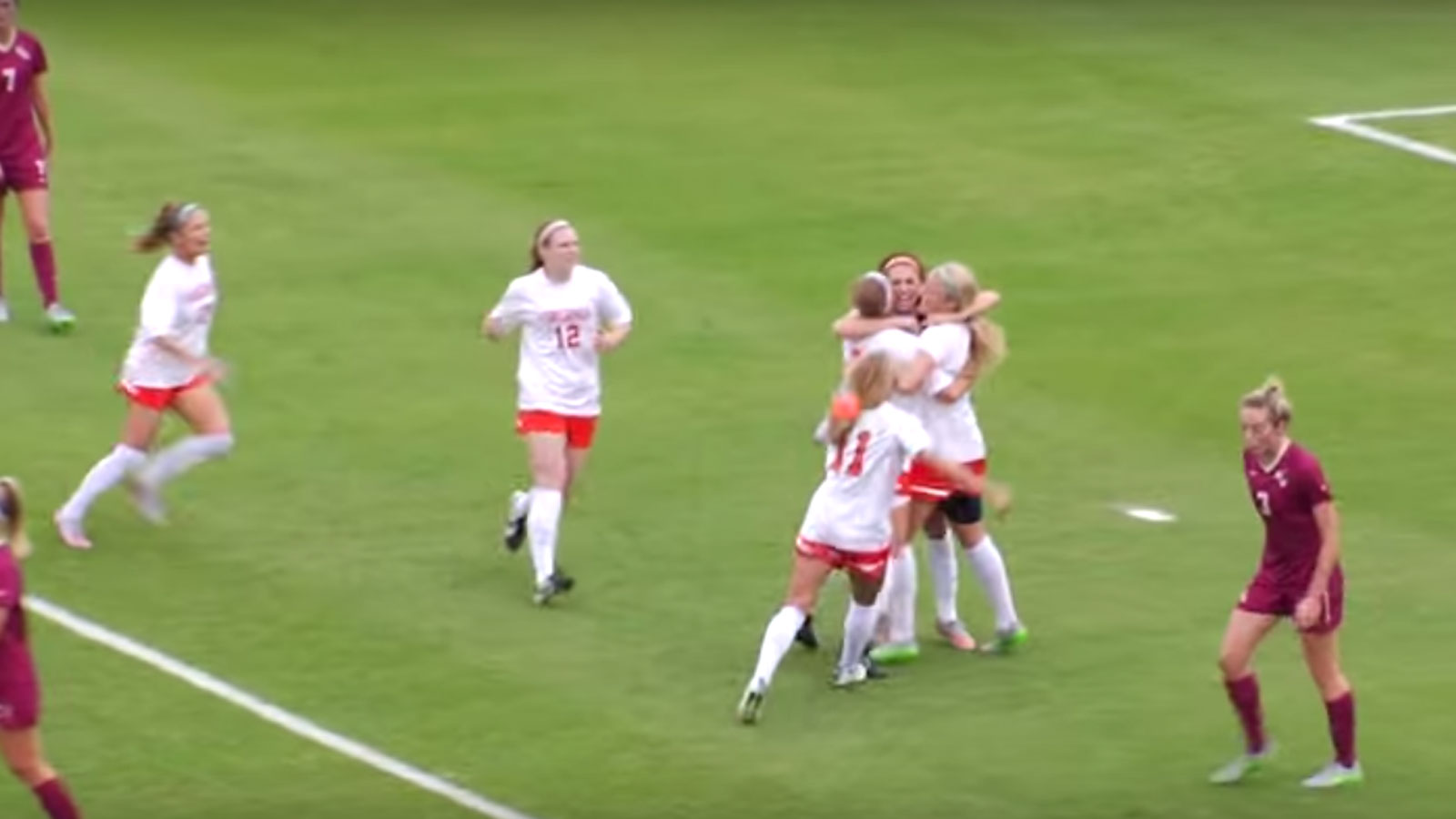 There are few more anticipated matches in the world of college soccer than when the top two teams in the country play. On Sunday, No. 2 Virginia hosted No. 1 Florida State as part of an already busy weekend for women’s soccer. But Sunday’s match wasn’t without controversy…

It’s a shame when an officiating call determines the outcome of any game, but it’s a travesty when a poor call determines a match-up of this caliber – a rematch of last year’s College Cup final.  In the 30th minute, Kirsten Crowley blocked a shot from Virginia’s Makenzy Doniak and was called for a handball in the box. Upon review, it’s clear the ball didn’t hit Crowley’s arm at all. Alexis Shaffer easily converted the ensuing penalty to give the Cavaliers the lead. Even down a player against one of the best teams in the country, the Seminoles defense stayed organized and managed to keep the deficit to one, but ultimately lost, 1-0. Virginia played without defender Emily Sonnett, who played the entire match for the United States against Brazil on Sunday.

How often does a player notch four goals in a game and still end up on the wrong end of a scoreline? That’s what happened to Miami’s Gracie Lachowecki Sunday against Boston College. The junior forward tallied all four of her scores by the 60-minute mark. When Lachowecki scored her last one, Miami held a 4-2 lead. Boston College charged back to tie and force overtime. Then in the 93rd minute, McKenzie Meehan scored her second goal of the game to lead Boston College to the comeback victory. In addition to her tallies, Meehan also tallied two assists.

South Carolina’s Savannah McCaskill opened scoring in the 6th minute of play, and Savannah Jordan answered 15 minutes later for the Gators. Neither side was able to break the deadlock and it looked like the contest would end in a tie, but just before time expired in the second overtime period, Liz Slattery fired an off-balance shot. Her shot crossed the goalline with one second remaining. Slattery’s goal was SportsCenter’s top play for Thursday.

Two second-half goals from CeCe Kizer led Mississippi to victory over Texas A&M in College Station. Sunday’s game was a wild affair with four lead changes. Gretchen Harknett gave the visitors a lead two minutes into the game on a feed from Bethany Bunker. The Aggies tied it up at the 20-minute mark off a goal by Haley Pounds. Less than three minutes later, Addie Forbus gave Ole Miss the lead once again.  Pounds then converted two goals, including a penalty kick, in the second half to give the Aggies a 3-2 advantage.  Kizer then scored two goals in a 71-second span to give Mississippi the lead for good. The win keeps Mississippi in the running for the SEC regular-season title, while eliminating Texas A&M.

After dropping three results in a row, the Tar Heels got back on track Thursday with a 2-1 victory over the visiting Fighting Irish. Sabrina Flores scored Notre Dame’s only goal of the match in the 47th minute. The Tar Heels were awarded a penalty kick in the 71st minute, which was converted by Alexa Newfield to tie the game. Three minutes later, Newfield assisted Joanna Boyles on the eventual game winner.

Haley Rosen sent a ball right between the keeper’s legs for the game’s first goal in the 13th minute. Washington State’s Maddy Haro tied the game in the 37th minute when she put away a rebound of an initial shot taken by Kaitlyn Johnson. The Cardinal found a game-winner with 90 seconds left in the second overtime as Averie Collins headed in a corner kick taken by Rosen.

Wisconsin’s Micaela Powers scored the game’s only goal in the 81st minute of play to lift the Badgers over Maryland on the road. The win secured Wisconsin at least a share of the Big Ten regular-season title. Wisconsin bounced back from some tough early losses to compete for the title. The narrow loss sums up the Terrapins’ season in a nutshell.  Maryland, who has managed just 4 points in conference play, has allowed no more than two goals in a game this season and has lost 10 games by a one-goal margin.