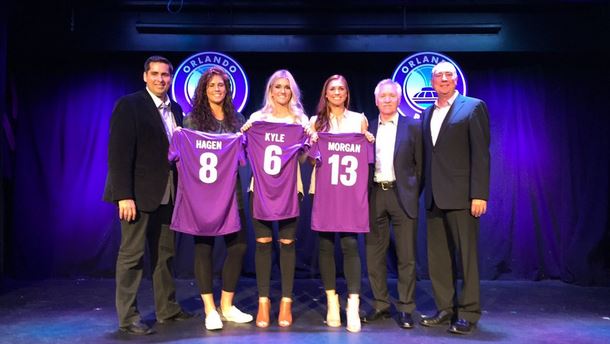 Alex Morgan is now officially a member of the Orlando Pride.

Morgan, Kaylyn Kyle and Sarah Hagen were unveiled as the club’s first-ever players on Monday in Orlando.

In exchange for Morgan and Kyle, the Pride traded to Portland Thorns FC the rights to their first Expansion Draft selection, the first-round selection (No. 1 overall) in the 2016 NWSL College Draft, and one international roster spot for the 2016 and 2017 seasons. The first expansion-draft pick is expected to be Meghan Klingenberg who was just traded from Houston to Seattle.

“It was a horrible secret,” Morgan said at Monday’s press conference. “I’m just really happy I’m able to finally come out in purple.”

“Today marks a significant milestone in building a successful professional women’s Club here in Orlando,” said Orlando City Founder and President Phil Rawlins. “Signing three players with the caliber of Alex, Kaylyn and Sarah, clearly demonstrates the Club’s intention to be successful from the very start. I’d like to welcome all three players to the City Beautiful, and I look forward to seeing them and the rest of the Pride on the pitch next season.”

Morgan played in 36 regular-season games for Portland, scoring 15 goals and adding 11 assists. But she played in just four games in 2015 due to injuries and the World Cup. She helped the Thorns win the inaugural NWSL title in 2013.

“On behalf of the Thorns, I would like to thank Alex for her immense contributions both on and off the field during her three seasons with the club; she is a first-class professional and an amazing role model,” Thorns GM Gavin Wilkinson said. “By no means did we have plans to trade Alex, but this is a unique situation where we took into account her personal considerations and one that, by virtue of the considerable elements acquired through this trade, will position our club for success in 2016 and beyond.”

Hagen was part of FC Kansas City’s back-to-back NWSL Championship teams, recording eight goals and three assists in 26 games primarily as a reserve or in a starting role when Amy Rodriguez was gone with the U.S. national team.