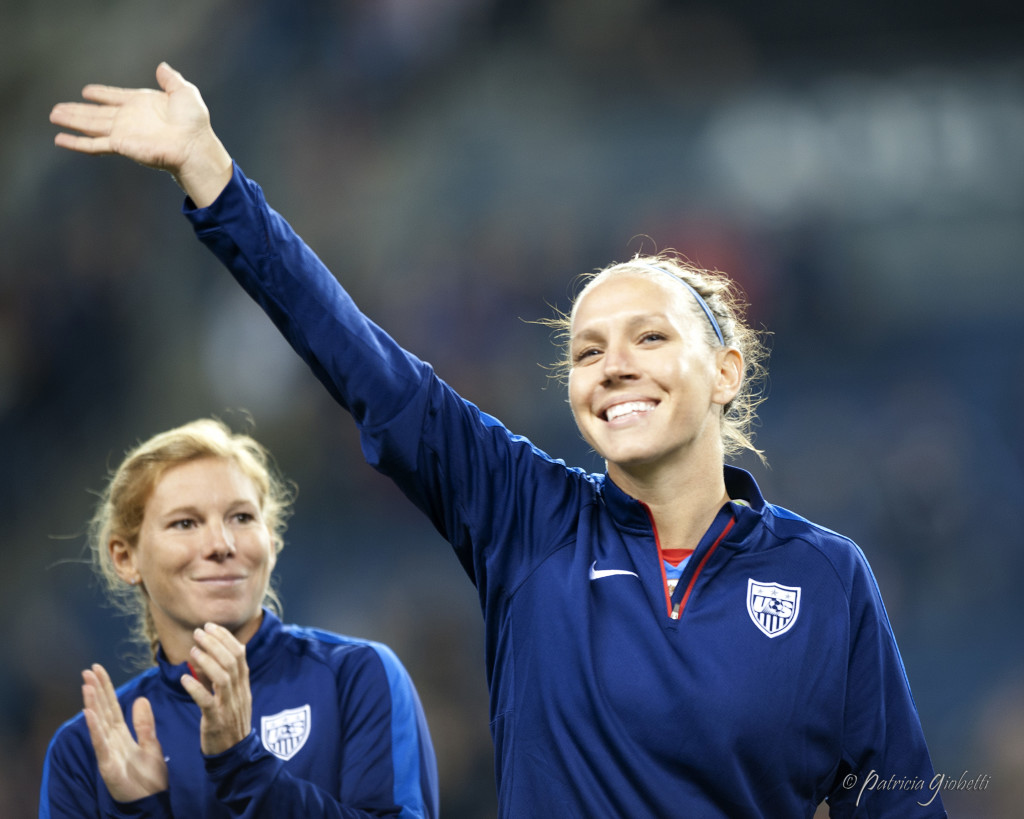 Lori Chalupny and Lauren Holiday play for the USWNT for the final time on Sunday. (Photo Copyright Patricia Giobetti fro The Equalizer)

Wednesday’s match was the final game in a U.S. jersey for Shannon Boxx, who wore the captain’s armband and said goodbye after 41 minutes on the field. Boxx and Holiday are done with professional club soccer, too — with Holiday going out a two-time NWSL champion — while Chalupny hasn’t committed to a future with or without the Chicago Red Stars.

Holiday scored the eventual game-winning goal in the 2015 World Cup final, a feat which was understandably overshadowed by Carli Lloyd’s immortal 16-minute hat trick. As I profiled in July for NBC Sports, Holiday is going out on top of the world. 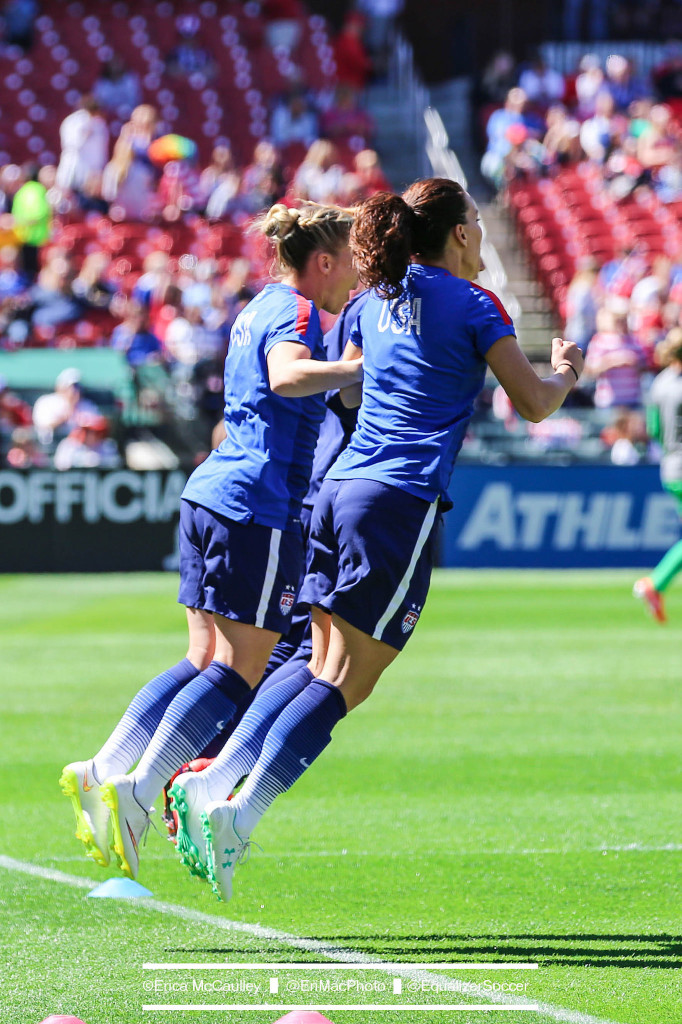 Tobin Heath, Amy Rodriguez and Lauren Holiday say a prayer and jump over the line to begin warmups before each USWNT game. (Photo Copyright Erica McCaulley for The Equalizer)

Holiday’s best friends on the team are Amy Rodriguez and Tobin Heath, all of whom really fully came into the U.S. national team picture in 2008 for the Olympics. They were known as “The New Kids,” and before every game they say a prayer and hope over the sideline together to begin warmups. Ahead of Holiday’s final match, U.S. Soccer sat the three down on camera for one last “New Kids” video:

U.S. Soccer has quotes from Holiday’s teammates to provide perspective on what they think. Here’s what a good quote from Whitney Engen on Holiday:

“She is probably the most complete player I’ve ever met, on and off the field. On the field, she’s a beast, and we don’t need to talk about her resume. It stands for itself. Off the field, her ability to connect with every single player on the team is amazing. We have ages ranging from 22 to 40 on this team and I’ve never seen a player who is able to connect so well with basically every social strata of a team. We’re going to miss her personality so much. She’s just a really, really awesome person.”

On Friday, Holiday detailed what retirement means in her own words, discussing her first national camp — where she passed out:

“I got so dehydrated that I needed two full bags of IV fluids to bring me back. I remember telling someone that I was about to pass out and then next thing I remember I was on the sideline with the medical staff. And do you know who sort of caught me and helped to the sidelines? Lori Chalupny. So it’s only fitting that we end our careers together on Sunday.”

Chalupny will end a very different U.S. career on Sunday. She was the left back on that 2008 Olympic team and considered one of the best in the world at the time. But recurring concussions kept her out of the national team picture for five years until she received clearance last December, eventually making the World Cup team and also retiring a world champion.

Heather O’Reilly played with Chalupny at North Carolina and through all age levels of the U.S. national team picture. O’Reilly provided perspective on Chalupny’s career and maturation:

“Lori Chalupny is one of the most talented players that this team has seen. I’ve known her since we’ve played together on the Under-19 team in 2002 so we’ve been teammates and roommates for a couple of residency camps. She is just a blue-collar hard worker. She’s so resilient. For her to take a bunch of years off and then to be able to come back, nearly five years later and contribute to this team, push this team and make this team better, I just think it speaks so much of her character. She can play all over the field and she’s very well-rounded off the field and she’s as sweet as they come. I think it’s been really cool to see her personality blossom and her confidence grow through the years. She’s not the same person that she was 10 years ago, she is so much more confident. She has such a more powerful voice now, that I think will help her in her life and in coaching if that’s what she wants to do. I think soccer has done that for her.”

“In several ways, I had several careers within my career. I played in the midfield for many of my caps, both centrally and on the flank, before switching to defender for the latter half of my career and for the past year with the National Team. I have to admit that it was a difficult transition. I remember watching forlornly many times during training as the attacking players worked on finishing (“darn, it looks fun down there!”) while I was on the other side of the field working on clearing and heading, but I take pride in being able to help the team however I could over the years. If a coach wants you to play a certain role and feels you can best help that team in that role, it’s a player’s responsibility to try to play that role to best of her ability. I was just happy to be on the field and help the team win.”

Sunday is sure to bring plenty of emotions. And one thing is for sure — U.S. coach Jill Ellis has her work cut out for her to find a central midfielder who can fill the huge shoes left in particular by Holiday’s absence.