Success at Rio Olympics on minds of Marta, Brazil 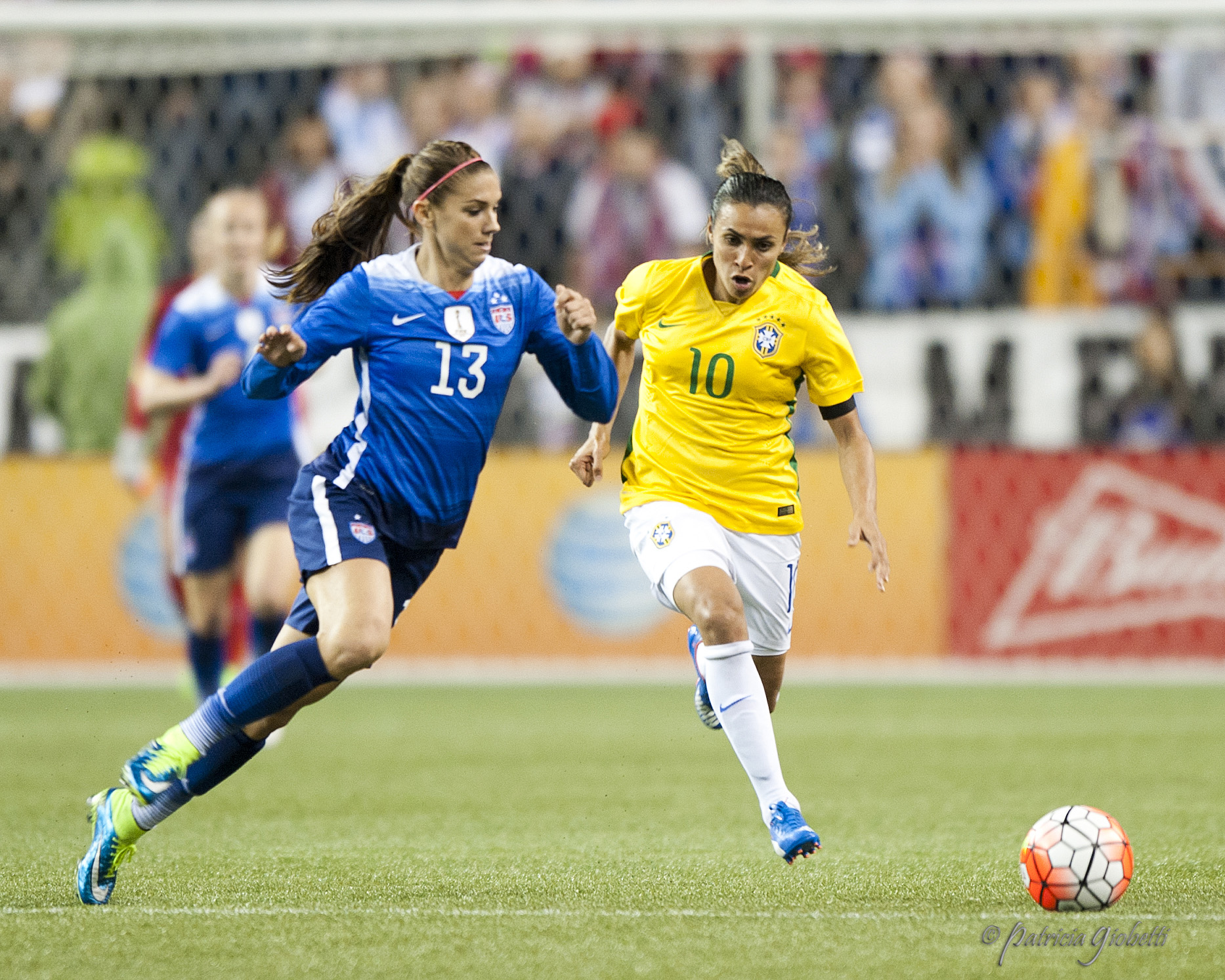 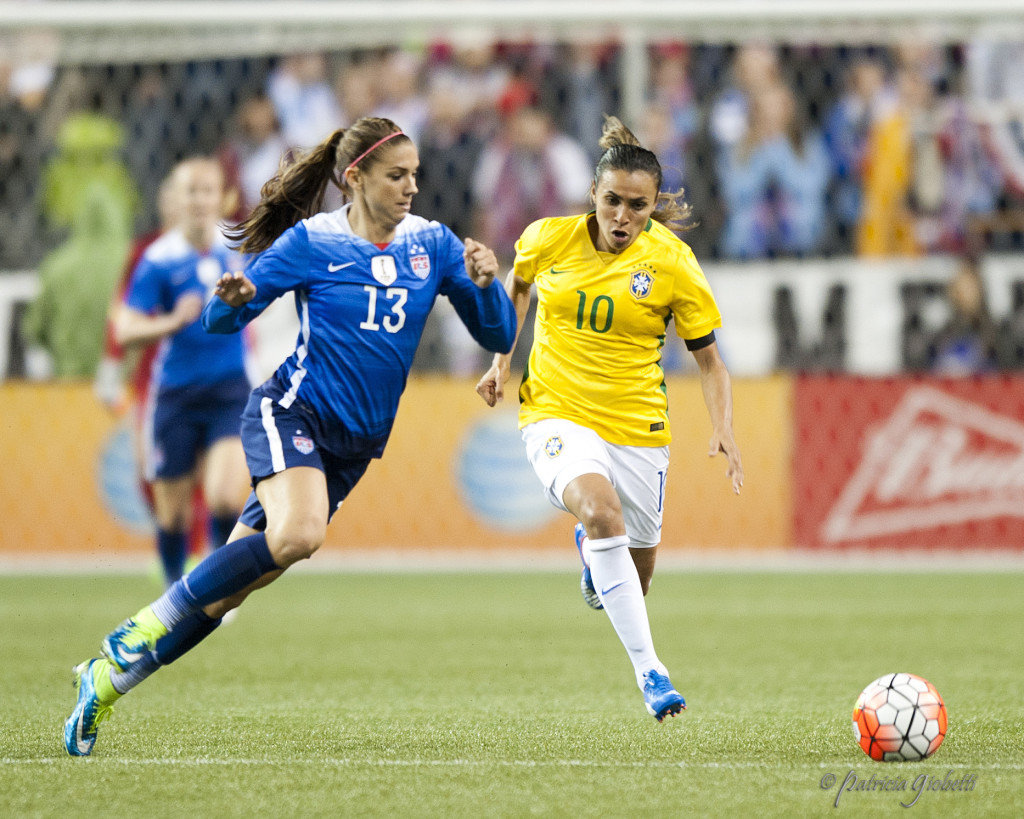 Marta (right) and Brazil have high hopes heading into the 2016 Olympics on home soil. (Photo Copyright Patricia Giobetti for The Equalizer)

SEATTLE — With the calendar nearly turning to 2016, another huge year is on tap for women’s soccer. For Brazil, the stakes are even higher as hosts of the 2016 Rio Olympics.

Women’s national team coach Vadao and his players put in a terrific showing on Wednesday night in Seattle and played to a 1-1 draw against the World Cup champion United States. Carli Lloyd scored late in the second half to keep the Americans’ 101 home-match unbeaten streak alive. While many of the 23,603 fans in attendance were well aware of the impressive streak, not everyone in a Brazil kit was aware.

Defender Rafaelle, who played for the NWSL’s Houston Dash in 2014, says she knew the stakes of the match heading into it.

[NWSL: Blockbuster trade sending Alex Morgan to Orlando  |  How the deal was made]

Having just won the Damallsvenskan League with FC Rosengard on Sunday in Malmo, Sweden, Marta flew in from Europe and landed in Seattle on Monday afternoon. With her sleeping clock out of whack — Malmo is nine hours ahead of Seattle — and a tactical game plan to absorb, Marta didn’t need any motivation from the streak as she prepared to play against the World Cup champions.

“I didn’t know of this (streak) before the game, but playing against the U.S. is always motivating,” the five-time FIFA World Player of the Year said. “It’s one of the best teams in the world, and with the crowd. It’s always a good game and I’m always motivated to play against them.”

Brazil was together for one full practice before playing the U.S. in Seattle. During the short preparation time leading up to the match, there was one key ingredient that helped Marta and some of her teammates recover — and she was in a city known for it: coffee.

“Drinking too much coffee to feel better and not so tired.”

In Brazil, soccer is much more than a sport — it’s a way of life. Children of all ages dream of playing for a top-flight club and earning enough wages to help support their families. The Brazilian women’s national team has a tremendous opportunity to be successful at home grow and capture their country just like the U.S., Canada and England all did during the 2015 World Cup.

Financial funding, media coverage, fan support and an overall positive attitude toward women’s soccer in Brazil are all still works in progress. The program is about seven months into its 18-month residency program with an eye on the 2016 Olympics. Rafaelle and Marta both talked about what, if any, changes occurred in Brazil following the World Cup.

“Yeah, we’ve got good support from our confederation,” Rafaelle said. “I know we still have a lot to get better, but our federation is helping us so we’re good for now.”

Marta is the most famous female player in Brazil and a world-renowned superstar. The 29-year-old gave an honest assessment about change in her country.

“Unfortunately we didn’t get our targets on the World Cup, so it didn’t change much for women’s soccer in Brazil,” the Brazilian captain said. “It didn’t go better, and neither did it go worse. It’s just the same level, but I expect that next year with the Olympics and with other opportunities it will get better and better.”

During the World Cup, the head of coordinator of women’s soccer in Brazil made some sexist remarks regarding the appearance of female soccer players in Brazil. Marco Aurelio Cunha suggested that players should wear shorter shorts, do their hair styles up and also wear makeup to progress the sport.

When it comes to actually watching Brazil on the pitch, Cunha might want to rethink his words. Brazil is a fun and exciting team which gave the United States a great match on Wednesday. Rafaelle is looking forward to the second fixture on Sunday in Orlando. She tried her best to describe what it’s like playing with a player like Marta.

“Oh I can’t describe that,” she said. “She’s an awesome player. I can’t play with someone as good as she is. I think we are going to play better and she can score in Orlando.”

If Marta can score, the United States could be on the wrong end of a home result for the first time since Nov. 6, 2004.