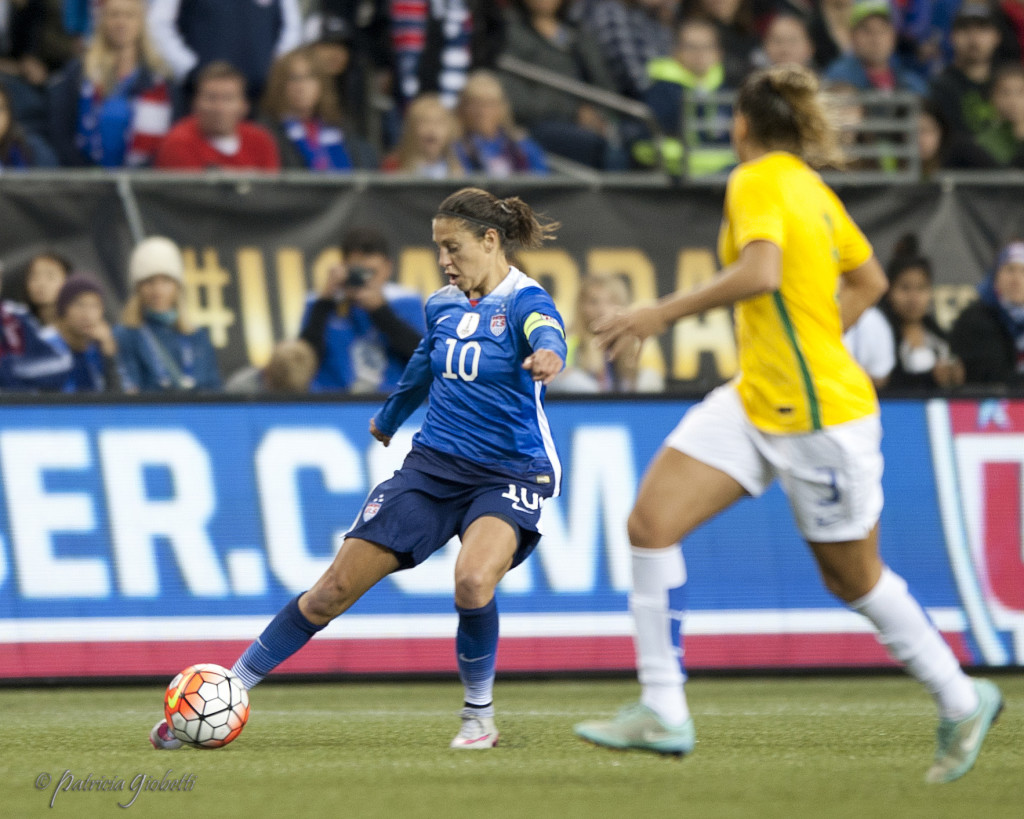 Carli Lloyd scored the game-tying goal for the USWNT against Brazil on Wednesday. (Photo Copyright Patricia Giobetti for The Equalizer)

SEATTLE — Who but Carli Lloyd?

Lloyd scored the equalizer for the United States women’s national team in the 85th minute against Brazil on Wednesday at CenturyLink Field, earning the U.S. a 1-1 draw and extending the Americans’ home unbeaten streak to 101 games.

“I think we put together a pretty decent performance against a really quality side with some amazing individual personalities,” said U.S. defender Meghan Klingenberg, who assisted Lloyd’s goal. “I’m happy with the result, obviously I want to win, but for now going into the next game we’re going to take what we can, learn from it and try and get better.”

Despite having had only one team practice this week in Seattle, Brazil came out firing.

Monica converted an early headed goal past Hope Solo just three minutes in after a terrific corner kick from Andressinha. This was the earliest goal the U.S. allowed in the calendar year and first time the Americans have trailed in a match since March 4 against Norway, a span of over 18 games.

The Brazil goal sparked Jill Ellis’ squad and started to shift momentum. Looking to answer back with a tally of their own, the U.S. had four quick corners in a span of 10 minutes. The best scoring opportunity came from some great play on the flank from Crystal Dunn. Alex Morgan was the recipient of a perfect cross from the NWSL 2015 MVP. Morgan’s header rolled just past the far post as Brazil bunkered down, but did not break.

Brazil was the United States’ toughest opponent yet on the victory tour. The U.S. beat Costa Rica and Haiti twice each by a combined 28-2 to start the tour. But Brazil is not Haiti nor Costa Rica, and it took some time before the U.S. stepped up there game and got going. The NWSL season finished in early September for many U.S. internationals while several Brazil players have been playing in Europe and further abroad.

U.S. Alex Morgan talked about how the layoff impacted the slow start to the match for the U.S.

“We really looked forward to playing Brazil and playing them again in Orlando,” Morgan said. “It’s actually an interesting time for the national team because we kind of took a little break the last couple of weeks since the league ended. Going into such a competitive match against Brazil, it’s definitely something we need to step up for so I think we got our feet under ourselves tonight and we’ll be looking better in a couple of days.”

Set pieces were a successful staple for the U.S. during the World Cup. Ellis has a bag full of set plays and tactics up her sleeve ready to unleash on the opposition at any time. Megan Rapinoe had a free kick in the 27th minute that played in Julie Johnston inside the Brazil box. But the Chicago Red Stars defender miss-timed her kick and failed to hit the target.

Brazil played a calm and patient first half of soccer. A dangerous midfield free kick almost caught Hope Solo going the wrong way in the first half, when Cristiane’s volley nearly found net.

Megan Rapinoe had what was a glorious opportunity to find the equalizer in the 69th minute. Rapinoe cut in towards Luciana and fired a point-blank shot towards the Brazilian goalkeeper. Luciana punched the ball away and out of danger. Moments later, Rapinoe found herself in another prime position and sailed her shot on to the top of the Brazil goal.

Brazil was under pressure in the final ten minutes of the match and they simply could not end the streak and keep the U.S. off the scoresheet. In the 85th minute, Meghan Klingenberg fought off the Brazil defenders and played a great pass towards Lloyd. The World Cup hat-trick hero hammered the ball off the crossbar and past Luciana. Lloyd did it again and kept the streak alive.

Not one to take all the credit, Lloyd praised Klingenberg for her play.

“It was a great little build up to get it wide to Klingenberg,” Lloyd said. “She beat her player and served a perfect ball across the box and I just knew it was one of those chances where I had to put a foot in there, step in there and try to make something help and we were able to finish it off with a goal.”

Shannon Boxx played in her final international match on Wednesday, starting and wearing the captain’s armband before exiting the match in the 41st minute. Western New York Flash defender and 2015 rookie Jaelene Hinkle earned her first cap for the United States, entering the match in the second half.

“It’s emotional, she’s been a fantastic player for this team. She is a legend,” Lloyd said. “She’s been the unsung hero, she’s been the player who has gone out there each and every game, done the dirty work and not necessarily given all the credit. In my eyes she’s one of the best defensive midfielders in the world and will always be one of the best. I don’t think we will ever see a Shannon Boxx type player come through this team. Its been an honour to play along side of her and its been an honour to call her my friend. She surly is going to be missed. It was great to see she was able to get some time, I thought she did fantastic out there and we’re all going to miss her.”