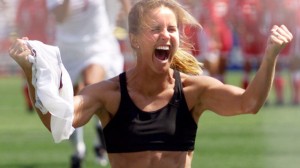 We all remember where Brandi Chastain was when the United States won the World Cup in 1999. She was in the middle of the celebration, shirt in hand, sports bra exposed for an iconic visual after she scored the decisive penalty to beat China at the Rose Bowl. Sixteen years later, Chastain was in McMinville, Ore., in the company of 175 aspiring players in an Olympic Development Program.

“I’m the head coach of the 2000 age group for Region 4,” the now 47-year-old Chastain said. “I figured if I wasn’t going to be at the final the best place to be would be with other girls who for the first time in their lives they will have seen a World Cup champion. We were in a big auditorium with a big screen. I bought all the kids basic white, tee-shirts and they decorated their tee-shirts with their favorite players. It was a way to bond and to feel the emotion of the World Cup. It was pretty cool.”

Wednesday night, Chastain will be on hand at CenturyLink Field and plans to take a selfie to outdo Landon Donovan. It’s all part of her partnership with U.S. Soccer sponsor Liberty Mutual. Fans will be invited to take selfies wearing their white crowns and post them under the hashtag #wearthecrown.

As for the match, Brazil will represent the first quality opponent for the United States since capturing the World Cup in July. The first four victory tour Matches against Costa Rica and Haiti resulted in U.S. wins by an aggregate 28-2. The U.S. women are unbeaten in 100 straight home matches.

“This is really the beginning of the next cycle which is preparation for the Rio Olympics,” Chastain said. “This is a great chance for coach (Jill Ellis) to check out the players, see where they are, and start making plans for the future.”

To that end, Ellis called in seven fresh faces for the camp ahead of two matches against Brazil—Wednesday on ESPN2 at 10 p.m. EDT and Sunday afternoon in Orlando. It will also be time to transition out some old faces. Shannon Boxx will retire from the team after Wednesday’s match. Lauren Holiday and Lori Chalupny will take their final bows on Sunday.

“That is important to the players,” Chastain said adding that she does not believe the emotion of the moment will interfere with the team’s performance. “The camaraderie that they have, the togetherness that they have, they’re a family. Heather O’Rellly was talking (to me) about the national team. She has basically spent more than half her life with the national team. You want to leave those players with a good feeling. You want to show them how much you respect them. If anything, other than wanting to win, going out the right way is really a top priority.”

Chastain said years down the road when the soccer fades into memories, many of the friendships will remain fresh. “I was sitting at the airport yesterday talking to Mia (Hamm) on the phone. We were not talking about the soccer that was played, but we’re now talking about the soccer we’re coaching with our kids. And we were laughing our heads off at how frustrating it is to be a very competitive person and having your kids picking the daisies or not watching the ball. So things change but you remain friends.”

As for Brazil, Samba Queens present a unique challenge to the United States because, as Chastain says, their style forces Ellis’ team out of its comfort zone defensively.

“The biggest issue Brazil presents is they’re just so comfortable with the ball,” Chastain said. “They love the ball. They want to do fancy things with the ball. That doesn’t always fall in line with what we’re really good at which is one-on-one defending. We’re not bad, don’t get me wrong. But we’re more of a team-oriented group. So can we deal with the speed, the pace, and the ability of a Marta while dealing wih that kind of all over the field as opposed to maybe one or two players.

“The continuity between the lines is important.”