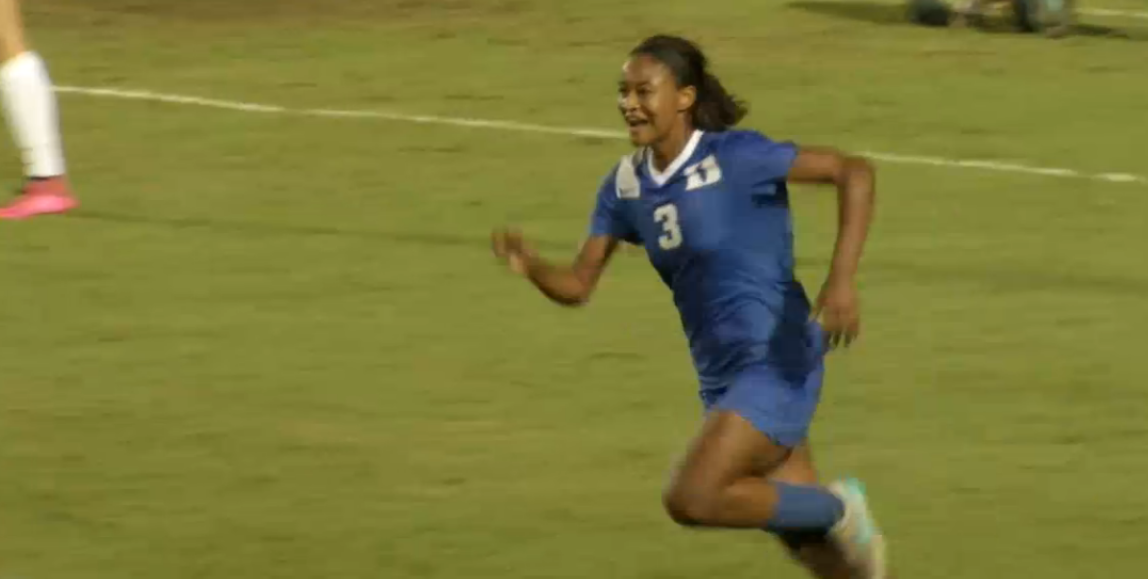 The week that was in NCAA women’s soccer featured a historic upset in the Tobacco Road Rivalry down in North Carolina. Here’s how it all went down:

For the first time in a decade Friday, the Blue Devils defeated the Tar Heels, 1-0. Imani Dorsey scored the game’s only goal in the 44th minute to give the visitors the victory. Friday’s loss marked only the second time in North Carolina’s history that the team has dropped three straight decisions. The Tar Heels have a remaining ACC schedule which includes both Notre Dame and Clemson, who are both currently ranked in the top 25.

Vanderbilt’s Simone Charley converted in the 97th minute to complete the Commodores’ come-from-behind victory against the Gamecocks. Raina Johnson opened the scoring in the 27th minute for South Carolina with an assist from Savannah McCaskill. Taylor Elliott tied it up less than a minute into the second half for the Commodores. Despite a heavy advantage in shots, South Carolina wouldn’t find the back of the net again. The result was huge for the Commodores as the team looks to secure one of the 10 spots in the SEC Tournament.

Marquette battles back to tie Georgetown despite being a player down

Despite Cali Pyzdrowski being sent off in the 57th minute, Marquette managed to earn a point on the road against the Hoyas. Taylor Pak opened scoring in the 49th minute which was assisted by Rachel Corboz. Corboz added a tally of her own in 66th minute to extend the Georgetown’s lead to two goals. Marquette struck twice in quick succession, however, in the 72nd and 73rd minutes to erase the Hoyas’ lead. Ashley Handiwork and Liz Bartles each scored for the Golden Eagles.

Colby Ciarrocca scored the only goal in the match as the no. 25 Scarlet Knights upset the visiting Nittany Lions in the game that could prove important to conference tournament seeding. Sunday’s match marked the Scarlet Knights’ fourth consecutive win over Penn State. Rutgers outshot Penn State 13-9 in the contest.

Rose Lavelle’s 83rd minute strike proved to be the difference as the Badgers topped Michigan State, 1-0. The win puts the Badgers atop of the Big Ten standings. Wisconsin had a decisive 19-5 advantage in shots.

Franny Cerny notched a goal for DePaul in the 26th minute.  Rachel Daly answered for St. John’s, scoring her 16th of the season in the 61st minute as the two teams battled it out to a tie. The two teams also sit tied atop of the Big East standings.

Nikki Farris and Emma Jones each notched goals for Oregon State as they earned a win at home on Sunday. Darian Jenkins scored the Bruins’ only tally of the night. UCLA is currently 6-7-1 overall and 2-3-1 in conference play.  UCLA will need two big wins in the final weeks of the season, if they want a shot at the postseason. The Bruins have both Stanford and California remaining on the schedule.