The Lowdown: XI tweaks for an improved NWSL 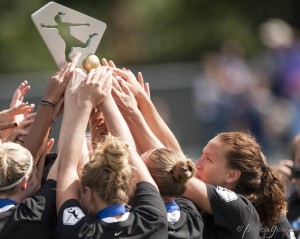 There is a new trophy on the way. How about a new name to go with it? (Photo Copyright Patricia Giobetti for The Equalizer)

Last year, I rolled out a list of 11 ideas for a better NWSL. One of them was to make the final into an event by putting it in a pre-determined stadium announced in advance. I won’t take the credit for it, but I was glad to see it happened.

This year, I have 11 more ideas. These are less hard-hitting and most of them simpler to implement as opposed to broad concepts. A few of them are likely pipe dreams at this point, and not all of them are under the umbrella of what NWSL controls. But these 11 tweaks would all make NWSL better as it hits an unprecedented fourth season.

I. Name the Final

The league took a huge step this year by putting the final at a pre-determined venue and trying to make an event out of it. Just about every element of this worked out well short of the ill-timed announcement. The next step is to give the final a new name. There is supposedly an upgraded trophy in the works, so why not roll it out with a new name? I’m open to suggestions here because this sort of creativity is hardly my strong suit. But I know that after three years, NWSL Championship is getting a bit mundane. And I know that Super Bowl and Stanley Cup have always sounded a lot more appealing than NBA Finals.

I understand entirely why players want to use their married names after they tie the knot. But the new rule should be that once the season begins, a player commits to whatever name is on file through the conclusion of that season. After that the league should maintain a list somewhere on its website for reference. That way when FC Kansas City draft Meghan Streight and then go to camp with Meghan Lisenby, fans can check the list and realize it is the same person.

I’m generally not so tolerant of players who accumulate yellow cards, but I would like to see a make-good process that would allow players to either clear their slates or have one yellow dropped. It just seems unfair for a player to have to play 10 or more games without taking a yellow card. Sometimes they’re just necessary. So how about five straight games or 400 straight minutes without one (starting from the game after the last card) and one of the accumulated cards comes off? Another idea is to use a point system for cards so that say, time wasting does not count the same as a studs-up tackle at midfield.

This is not necessarily a league issue, but I would like to see more players carded for taking reckless runs at goalkeepers once it becomes clear they have little to no chance of winning the ball. Physical, hard-nosed play is okay, but at some point you need to concede your space. It would be a shame if it took an injury to a goalkeeper to bring this issue to the forefront.

V. Use the 10-yard spray paint

No, I don’t think there is a major problem with infringement on NWSL free kicks, but using the white spray paint to unofficially mark off 10 yards just makes sense. At the very least it is cheap, quick, and speeds up the game. So to echo the last point, why wait for this to become an issue?

VI. Try to piggyback off the MLS schedule

This should only be done in cases where it has no adverse effects on scheduling or traveling, but the idea is this: Try and schedule some NWSL matches between teams from the same cities on the same weekends. Let’s say the Dynamo are in Portland or Seattle one weekend. Why not try and put the Dash in the same city either the day before or after? This could lead to additional traveling support for fans enticed by the two matches, and could also increase media coverage if anyone travels to cover the MLS match. This should never be a priority, but I can’t see it doing any harm even if it has no positive yield.

I was one of the few who was something less than apoplectic about the final being on a Thursday night. Television ratings appear to justify that position. But Thursday remains an odd night for a final, but if it has to be, wouldn’t it be great to see NWSL start to take some sliver of ownership on the night? Basically, give fans a taste of the Thursday night routine so it becomes a little less than foreign once the most important match of the year rolls around. Of all the items listed here this one is the least likely since NWSL is still in the stage where the best television deal it can get is to shoehorn games into some network’s already-crowded lineup. It sure sounds good though.

This doesn’t mean that everyone on the allocated list should be under a full, U.S. Soccer contract, but it would be great if the federation would foot the bill for a full 30 players beginning in 2016. Even if it just meant small raises for the bottom 10 players and guaranteed them a camp invite, it would benefit the clubs and players alike. Not counting on this one happening but it would go a long way on multiple fronts.

I’ll preface this by saying I am not sure if any teams already do this, but I do know enough teams that don’t. If the goal is to proverbially “grow the game” then why not let everyone who walks through the gates know exactly who everyone is on each team. Even if it’s nothing more than a folded sheet of paper with rosters, and even if it costs $1 (not my first choice), why not let every fan have a numerical list of who plays for each team in front of them while they watch the match? And just before lineups are introduced the public address should announce which players are not available for that night. No reason for the discussion in the seats to be whether or not a fan favorite will check into the match when anyone following on Twitter can easily access the knowledge that she is not an available sub. This seems essential in allowing in-house fans to learn the teams and players.

XI. Goal of the Week/Save of the Year

No explanation required here. It’s too easy not to do.