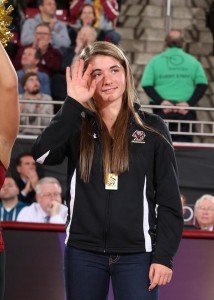 Cornell and North Carolina were the only remaining unbeaten teams heading into last week’s action and neither one survived the weekend. North Carolina suffered two losses on the weekend. First, the Tarheels fell to Louisville in overtime. Both of the Cardinals’ goals came off free kicks. Alex Kimball scored North Carolina’s only goal of the match. On Sunday, the Tarheels dropped a 1-0 match to then no. 2 Florida State. Berglind Thorvaldsdottir scored in the 79th minute for the Seminoles. Meanwhile, Harvard scored twice to end Cornell’s unbeaten run on Saturday. Harvard’s Midge Purce and Emily Mosbacher tallied the only goals of the game.

After suffering a freak achilles injury that sidelined her for all of the 2014 season, Meehan has rebounded in a big way. Last Thursday, she scored her 40th career goal for the Eagles, becoming the school’s all-time leading scorer. The 13th minute strike was the redshirt junior’s 11th goal of the season.

Senior Stephanie DeVita scored twice in Furman’s 3-0 victory over Wofford. Her second goal marked the 60th of her career, good for the all-time record in the Southern Conference. DeVita is also the Division 1 active leader in both points and goals scored.

Mariana Galvan scored in the 110th and 103rd minute against Loyola Marymount and Pepperdine respectively to lead the Broncos to a 6 point weekend. All 3 of Galvan’s goals this season have been double overtime winners. She also scored the game winner against Kansas back on September 4th.

The Wildcats dropped a 0-3 decision to Mississippi State Sunday. The loss could very well impact Kentucky’s seeding in the SEC conference championship next month. Kentucky heading into the weekend poised to make a run at one of the top positions in the tournament, but after a loss and a tie last weekend, the team has dropped to 5th in the standings. Mississippi State’s  Lauryn Bruffett won SEC Offensive Player of the Week honors for her efforts on Sunday. The freshman scored the first two goals and assisted on the third.

The Gamecocks came out on top in this Thursday night no. 8 vs. no. 10 matchup. Sophomore Savannah McCaskill scored the game winner in the 10th minute and assisted Raina Johnson’s insurance goal to lead South Carolina to the 2-0 victory.

Washington State recorded only 4 shots on frame in the contest but converted all but one of their chances for a 3-0 victory over Colorado. Kaitlyn Johnson, Kourtney Guetlein, and Tia Gavin all recorded goals for the Cougars. Colorado recorded a season high 11 shots but were unable to find the back of the net.