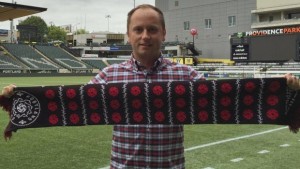 Portland Thorns FC officially named Mark Parsons as the club’s new head coach on Monday, one week after announcing that Paul Riley’s contract would not be renewed.  Parsons had been head coach of the Washington Spirit since midway through the 2013 season before resigning abruptly last Wednesday.  Several outlets, including The Equalizer, reported last week that Parsons was heading to the Thorns.

“We are excited to announce Mark as the new head coach of Thorns FC,” general manager Gavin Wilkinson said in a statement.  “His coaching philosophy, skill set, and personality are a very good fit for the organization and we are excited to see what he can do with the considerable resources he will have.”

Parsons takes over a Thorns side with many question marks looming.  Despite a star-studded roster in 2015 the club was beset by injuries and did not do a good enough job managing the roster balance that came with absences from World Cup players.  After winning the 2013 NWSL Championship under Cindy Parlow Cone, the Thorns lost in the semifinals in 2014 under Riley and then missed the 2015 playoffs with a 6-9-5 record.

Parsons took over for Mike Jorden in Washington after the Spirit started 1-7-3 in 2013.  The remainder of that season was rocky but Parsons engineered a turnaround that saw the Spirit reach the playoffs in both of his full seasons at the helm.  They lost their semifinal match in Seattle both seasons.