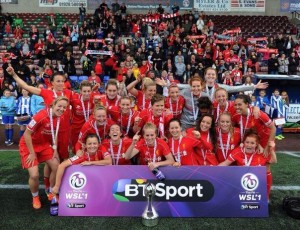 Liverpool’s two-year title run is over. Chelsea or Manchester City will be the new FAWSL champions on Sunday. (Photo: Liverpool LFC)

The 2015 FAWSL title race has come down to the final match day. Chelsea sit top of the table with 29 points while Manchester City sit second with 27 points. The final fixture day will see both teams at home on Sunday, October 4. Chelsea host Sunderland and Man City host Notts County.

Chelsea had a chance to claim the FAWSL title last season on the final day only to come up short. Liverpool Ladies took the top prize with a win and a better goal differential. Football fans in the U.K. have had quite a calendar year supporting a bronze winning England team at the World Cup and subsequently the FAWSL prior and post World Cup.

Manchester City’s Jill Scott was a force in the midfield for England at the World Cup. Since coming back across the pond she and her teammates have noticed an overall attitude shift in the way women’s football is represented in the media and with increased support from fans.

“Yeah, I think so. You get a lot of messages from parents with sons as well as daughters now. It used to be just daughters. You’ve got sons looking up to women’s footballers. I just think players are more well-known now. There’s definitely been a shift in attitude and that’s from the males as well as the females.”

Premier League legend, Frank Lampard has had the honor of playing for both Chelsea FC and Manchester City during his illustrious career in England. The twenty-year veteran of the beautiful game recalls a time when there was zero interest in women’s football. England’s success at the World Cup has brought a massive level of awareness, acceptance, and knowledge for female footballers in England.

Lampard was able to keep an eye on the World Cup while adapting to his new team, New York City FC.

“Well it’s done a lot. I think women’s soccer in the U.K. has gone through the roof from when I first started playing myself. I don’t think the credibility was given that it deserves, I don’t think the fans were there to make the game grow, and now that’s changed. (England) coming third and nearly getting to the final was great for them, and great strides. Not only that, I was in the U.S. at the time and I saw what it meant for the U.S. women’s team to win it. I think the game’s growing worldwide for them.”

Manchester City is an ideal club to play for. Players train full-time and the training facilities, pitch, and high club standards put City at an advantage over other clubs. Manchester City can offer female footballers an opportunity to play for a club that is run at a first class and almost at a Premier League level. Scott is in her second season with Manchester City and enjoys the friendly family team environment concept.

“I think it’s just one family. We get so much support and we’ve got the best of everything in my opinion. I think it makes the girls really humble. We really want to give back to the club. As you can see we’re playing well and we are putting in 100 percent effort every week. We really want to reward this club with trophies because that’s what it deserves.”

The 5,000 seat Academy Stadium on the Etihad Campus makes for a brilliant and fantastic atmosphere. With one match to play at home, City are drawing an average of over 1,300 fans this season. The brand new facilities are something Scott thinks away teams are also keen to use when playing against Manchester City.

“When we’ve got a game, I think even the away teams enjoy coming here and playing because of our pitch. You can get the ball down and play football so I think we do attract players because of the facilities and obviously the full time training we can offer players.”

The England squad is well represented at Manchester City. Scott is joined by fellow internationals including Toni Duggan, Lucy Bronze, Karen Bardsley, skipper Steph Houghton, and recently called up Demi Stokes, and Izzy Christiansen. Naturally the Man City experience is an attractive option for players wanting to train full-time as a professional athlete. The danger is that Manchester City could become a primary England club. That could potentially fracture the competitive balance of the FAWSL and jeopardize consistent playing time for England internationals at the club level.

The 28 year-old Scott was quick to laugh off the morphing Manchester City and England notion.

“(Laughs) I don’t know about that. We’ve got five England players in total, but we’ve got a lot of girls who are coming through with the younger age groups. Players who play for Scotland, we’ve got German players, so I don’t think it’s just about having English players. I think it’s about getting the right blend and the right people as well. We’re a club that focuses on getting good people as well as good players.”

Those good players will be put to the test on Sunday vs Notts County. Jill Scott and Manchester City need a victory and some help from Sunderland against Chelsea Ladies. It would be a complete shock if Manager Emma Hayes and her London club drop the FAWSL title on the final day for the second consecutive season. The top two FAWSL teams will earn a 2016-2017 Champions League berth.