What we learned from KC’s 1-0 win over Seattle 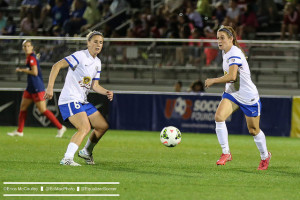 Heather O’Reilly (right) changed Thursday’s final with her only foray to the right side. (Photo Copyright Erica McCaulley for The Equalizer)

PORTLAND, OR — Here are three things we learned from Thursday night’s NWSL Championship, a 1-0 win for FC Kansas City over Seattle Reign FC.

Heather O’Reilly can still change the game:  O’Reilly spent much of the match on her customary right side bottled up with limited space.  But in an instant, she changed the game by making a spur-of-the-moment switch to the left side where she got into space and sent a perfect cross that Amy Rodriguez finished for the only goal of the night.  The play transpired right after Reign right back Kendall Fletcher was forced out of the match due to injury with Elli Reed coming in to replace her.  O’Reilly and head coach Vlatko Andonovski both denied making it a point to attack Reed right off the bat—even though Fletcher was down long enough that both teams huddled by their benches.

“I would love to say that I told her to do that, but no, that was HAO and her creativity,” Andonovski said.  “One thing that these players have is the freedom to feel the game and find themselves in the game.  I believe in their creativity.  I believe in their knowledge and understanding.  That’s one of the reasons why we have been so successful because they have the freedom to do things on their own.”

With that, Amy Rodriguez patted Andonovski on the back and said, “You’re pretty good too.”

Speaking of ARod:  Four years ago, Rodriguez was on the wrong end of an excruciating WPS final loss with the Philadelphia Independence when she missed several golden opportunities in extra time in what turned out to be a loss on penalties to the Western New York Flash.  After two years away from club soccer due to the absence of a league and the birth of her son, Rodriguez has returned a more efficient and lethal finisher.  Her goal in Thursday’s final was the third scored in the last two finals by FC Kansas City.  Rodriguez has them all.  It was the fourth goal scored by FC Kansas City in this year’s playoffs.  Rodriguez has three of them.

“I had a meeting with Amy the night before the game,” Andonovski said.  “It’s not going to be easy.  You may not get the ball.  Sixty minutes, seventy minutes, eighty minutes, eighty-five minutes—if you get once chance, in the eighty-sixth minute, you’re going to decide the game.”

It turned out to be the 78th minute, but Rodriguez made good on her only chance of the final, getting on the end of O’Reilly’s cross and getting Reign keeper Hope Solo off balance for the finish.

“Amy is the kind of player who is going to always create chances for herself,” Yael Averbuch, who hit the winning penalty for the Flash in 2011, said.  “I played with Amy when she first came onto the scene with the U-17 national team.  Over the years I think Amy has matured a lot as a player.  She has always had the same great qualities.  Even coming back after having her son Ryan, she’s a little bit different in her approach to things and her maturity with her ability to be patient and not get frustrated.  So maybe she doesn’t get the opportunities she usually gets.  Like today, she didn’t have a ton of opportunities but she was so ready for that one.”

Rodriguez was ready, and FC Kansas City have won two NWSL Championships in a row.

Reign never got it going:  The Reign defended exquisitely for much of the night, but the lack of ability to create and finish their own chances allowed one, untimely defensive breakdown to sink them in the final for the second consecutive season.  The Reign were limited to seven shots on the night, three of which were saved by Nicole Barnhart and another that Megan Rapinoe smacked off the post.

The engine in midfield, Kim Little, was denied the ball much of the night and when she got it, found the FC Kansas City defense well positioned to deal with her golden touch.

“It got a little stretched at times,” Rapinoe said.  “I think as a whole when we can’t get that possession that we like and we can’t get to areas that we like I think everyone kind of struggles a little bit.  There wasn’t a lot of support around (Little).  We were getting a little transitional especially in the first half.  She thrives when she’s in tight spaces with players to play around.”

“You’ve got to give credit to Kansas,” Reign coach Laura Harvey added.  “They reduced us to shooting from distance.”

Still, despite a second straight excruciating loss in an NWSL final, the two-time Shield winners are determined not to be defined by their season-ending disappointments.  “This won’t define us,” Harvey said.  “Because we won’t allow it to.”