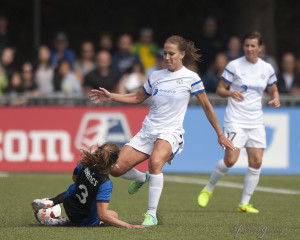 Lauren Holiday will retire having added another NWSL Championship to her World Cup trophy. (Photo Copyright Patricia Giobetti for The Equalizer)

PORTLAND, OR — Lauren Holiday’s teammates kept saying they wanted to win this one for her. In the end it was Holiday who won it for her teammates. Thursday night’s game plan for the NWSL Championship against the Reign saw much of the play go through midfielders Jen Buczkowski and Mandy Laddish who in turn looked to play balls wide to Heather O’Reilly and Erika Tymrak.

“Seattle came out absolutely the way we expected,” FC Kansas City head coach Vlatko Andonovski said. “It did not surprise us. We were getting ready for lots of players in the middle. We were getting ready for two players around Cheney (Holiday), and two players around (Amy) Rodriguez. So we knew that the game would be decided from Erika or HAO (O’Reilly.)

“Cheney did an unbelievable job in sacrificing part of her game in allowing us to build through Mandy and Buczkowski so they could provide the balls to HAO and Erika. All together everyone played their part.”

It should not come as a surprise that Holiday would be willing and able to sacrifice her game for the good of the club. Playing her last game for FC Kansas City, Holiday leaves behind a legacy of two NWSL Championships but also a culture of unselfishness she helped nurture.

“I think her legacy lives far beyond the soccer field,” Rodriguez, whose goal gave Kansas City the 1-0 win on Thursday night. “We all know she’s an excellent player. She’s proven that so many years in a row. For me, my relationship with her is much deeper than soccer. I’ve just been so fortunate to get to know her and to have her in my life and I plan to keep her in my life for quite a while.”

Holiday may have sacrificed touches and attacking real estate, but she did have a hand in the goal. The Reign had just been forced into a substitution at right back when Elli Reed came in for an injured Kendall Fletcher. On FC Kansas City’s first attacking sequence after the substitution they pounced—starting with a gorgeous ball out of midfield by Holiday.

“Lauren said that she was maybe looking up to switch the point of attack and I think I screamed for it and we were able to get a combination going,” O’Reilly said. “And then to see A-Rod just slashing in the box was absolutely brilliant.”

The beauty of the play was two-fold, even if neither O’Reilly nor Andonovski took any credit for the timing. First, the play went into space behind Reed, who made an effort but failed to knock down Holiday’s outlet pass. It was essentially Reed’s first involvement in the match. Second, O’Reilly had switched from the right side to the left just for that play.

“No,” she said. “It don’t think it was that. Just trying to find some space and find some opportunities to be successful. I wasn’t finding the ball as much on the right side and one thing led to another and I just found myself over there.”

Andonovski also deflected credit, but he did tell of a meeting the night before with Rodriguez when he told her that she would have an impact on the match—if she could just be patient. “Right before the team meeting. We watched highlights of every time she touched the ball against Seattle. I told her it’s not going to be easy. You may not get the ball. (But) if you get once chance you’re going to decide the game.”

After three playoff appearances in three seasons and two NWSL championships, there is change coming in Kansas City. Holiday’s career with the team is over and the same could be true for Jen Buczkowski. The NWSL’s iron woman has been in the starting lineup for every FC Kansas City match ever, but after winning her third championship (from six finals including WPSL Elite) since 2009, she was non-committal about her future.

For one more night though, the narrative was still about the player they still call Cheney.

“I’m very happy obviously about the championship,” Andonovski said. “But more than anything else I am happy that as a team we were able to win for Cheney.”