Blues, Reign not the only teams pleased to reach final 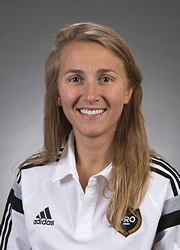 PORTLAND, OR — A physician’s assistant, an economics professor, and a high school teacher are gathered together in Portland for the NWSL Championship.  They are soccer junkies yet they will not spend any time socializing with the throng of supporters that live in or have descended on Portland for the match.  They will be a vital part of the final, but they would just as soon have you not know they were ever in town.

“I think our general goal is that nobody knows that we’re there,” said Amanda Ross, one of two assistant referees for Thursday night’s title match and an economics professor from Rochester, New York.

Such is life as a soccer referee where a good match goes unnoticed by all but those in the inner circle, and a bad match—even a bad moment—can result in becoming famous for all the wrong reasons.

But Ross, fellow assistant referee Jennifer Garner, and referee Katja Koroleva, are the picture of calm as they chat about preparing for one of the biggest matches of their lives.

“I think this game is rather different than any other match this season” Koroleva, a physician’s assistant in a Seattle emergency room, said.  “Prior to today points were included and it was a long  season of building up to this point.  Today it’s a winner-take-all, there is silverware on the line.  So it’s a finale.  It’s kind of a final straw for the players.  For us as referees it’s an opportunity to referee the championship game.  It’s where every player, referee, coach, fan builds up an excitement to be a part of.”

Koroleva runs the crew and will have the most interaction with the players throughout the match.  Since the referees have nothing riding on the outcome of the match she naturally expects emotion from the players.  In a final, she said, that emotion figures to be a notch higher than usual.

“Today there is a little bit more on the line for them with each touch they take, with each shot, with each save,” she said.  “I anticipate a lot more emotions from the players and having the challenge to deal with those as part of this final match.  I expect them to be more emotional.”

While the teams do much of their training in the public eye, often taking time after sessions to address the media, the third team—the ones wearing the referee uniforms—prepares in a similar manner, only they do it almost entirely incognito.

“Most of us train on a daily basis,” Koroleva said.  “Maybe one day off for recovery once a week.  As FIFA officials we are also asked to test on a regular basis for fitness testing.  So that’s completed prior to certain events, tournaments, or at an interval during the year.  So there is a standard that is always met.”

“Very similar to the players,” echoed Ross.  “We all have strength and conditioning coaches that handle our workouts and tell us what to so to we can be at peak performance just like the players.”

So a lot of the training mirrors what the players do, but the biggest difference is that there is no home base for the referees.  They fly into cities a day or two ahead of matches (for regular season matches one assistant referee and the fourth official are usually drawn from a local pool to save on travel costs) and go their separate ways after it ends.

“A lot of us stay in contact with each other,” Garner, a high school teacher from Dallas, said.  “And we talk on a daily or weekly basis.  That’s helpful because you know that your friends that are referees as well are working hard like you are.  You’re discussing the workouts, how you maybe felt during the workout, progress that you’ve made.  On top of that it’s just intrinsic motivation as well.  You want to be here.  You want to do this and you want to do well.  That really keeps you going.”

The skill sets and training regimens vary slightly from the center referee to the assistants.  Koroleva’s testing includes more agility and endurance.  Ross and Garner do more sprinting and must maintain certain speed requirements to keep up with attacking players’ runs.

The preparation does not end with the physical side.  Before stepping on the pitch, the entire referee crew—this one also includes fourth official Margaret Domka and a fifth, assistant referee Ben Wooten—goes over match tactics and player tendencies, all designed to help them be prepared for what might happen.

[MORE: Reign will try to play keep-away  |  Holiday wants another title to go out on ]

“We prepare for the team matchups, discuss certain situations,” Koroleva said.  She said they do not get so specific as to anticipate what might happen when two players get together for a challenge, but they do study each player in depth ahead of a match.  “Understanding each player and what they represent for that team and their opponents that they’re matching up against and their capabilities.”

As for the assistants, Ross said:  “We need to have that (knowledge of) who shoots as soon as they have space so that way we can anticipate to be there in case there will be a quick goal line decision to be made.  Also in terms of player tendencies with tactics and how a defensive line move up together.  How do attackers time their runs? Are they more direct? Do they tend to go horizontally and then cut forward?”

The work continues at halftime where the crew takes time to make adjustments–just like the players.

“We take a little bit of time and take a breather,” Koroleva said.  “We come back and sum up the half.  Understand what happened—player tactics, team tactics, tendencies of players, key matchups.  How we can improve or change anything that we need for the second half.”

“Halftime is a great opportunity for us to communicate with the entire crew about situations that we see,” Garner said.  “We also discuss between ARs the defensive strategy that we noticed so that going into the second half we are prepared for what is going on—knowing that that can obviously change.”

Calm as they were, the group agreed it was a career highlight for all and seemed pleased to be able to work a final in front of what should be a sizable crowd at Providence Park.  And every now and again their inner soccer fans peaked out just a bit.

“Something else that makes this game so much different from any other is the neutral site,” Ross said.  “It will be interesting to see how that affects the game.  Portland always draws a good crowd.  But it will be different.”

Just don’t expect the referees to pay too much attention to the crowd—at least once the match begins.

“Pre-match you take in the crowd and the atmosphere,” Koroleva said.  “But for me when the first whistle blows there is a zone that you enter and focus that remains just on the field of play.  Certainly there are moments when you notice the crowd but primarily you are focused so hard on the match that it doesn’t necessarily affect you throughout all aspects of the game.”

To work—and to hope no one notices.