The Lowdown: How the final will be decided

Thursday’s NWSL Final will be a rematch of last year’s, won by FC Kansas City. (Photo Copyright Patricia Giobetti for The Equalizer)

With Thursday’s NWSL Championship fast approaching, here is one man’s opinion about how it might play out.

Two of the best in the business here.  Hope Solo won the Golden Glove at the World Cup, tying Nadine Angerer’s record for consecutive shutout minutes in a single tournament along the way.  Nicole Barnhart is a national team veteran who has led NWSL in shutouts all three seasons and has had multiple league streaks in excess of 400 minutes without conceding a goal.  Barnhart is already the only starting goalkeeper to win in WPS and NWSL while Solo will be trying to finish a World Cup/NWSL double.  Both are remarkably solid but Solo probably has a bit more agility and a greater ability to bail out her defense.

Again, two of the best units in the business.  FC Kansas City boasts a center back pairing of Becky Sauerbrunn and Amy LePeilbet who may have been the two best at their position in the league this season.  Right back Leigh Ann Robinson takes a high perch in an effort to dominate her flank and left back Rebecca Moros, a starter on the 2011 WPS champion Flash, has shown improvement throughout the season.  As a unit they have started every match together when available, the only exception being Sauerbrunn’s absence to play in the World Cup.  They are extremely difficult to break down especially with Jen Buczkowski sitting on top of them.  If there is a weakness it is the propensity to allow goals in bunches once the first one slips through.

The Reign back four underwent a major transition earlier in the season when Rachel Corsie moved into the starting lineup as Lauren Barnes’s central defense partner.  That pushed Kendall Fletcher wide right and Ellie Reed to the bench.  The move was pulled off without a hitch.  Fletcher has been just as good wide right and Barnes was finally recognized this season with a spot on the league’s Best XI.  The gem of the group though may be Stephanie Cox who is as good a left back as there is in the world.  Whether or not Cox is able to keep Leigh Ann Robinson from getting involved in the FC Kansas City attack—or at the least making her pay for it if she does—will be a key battleground for the match. 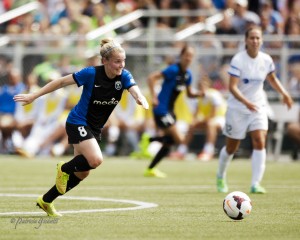 Kim Little is on fire in 2015, just like 2014. (Photo Copyright Patricia Giobetti for The Equalizer)

Is it too repetitive to say they are two of the best around? Kim Little and Jessica Fishlock are as good a two-way, midfield tandem as has ever passed through women’s pro soccer.  Fishlock makes her mark on nearly every corner of the pitch and Little’s small spurts of possession are almost always positive.  Keelin Winters is a perfect compliment to them and likely starter Merritt Mathias has fit in well after being on the other side of this matchup a year ago.

The Blues are led by defensive stalwart Jen Buczkowski and 2013 league MVP Lauren Holiday.  But they really get in sync when Erika Tymrak and Heather O’Reilly are able to spread the attack to the flanks and offer more variety in the way of service ahead of Amy Rodriguez.  The Blues have tinkered with their formation a bit of late so we could see Yael Averbuch get the start next to Jen Buczkowski or perhaps Mandy Laddish if they decide to go with more of an offensive shape.  Holiday ran amok in the first half of last year’s final, something the Reign will be trying hard to prevent in the rematch.

The big question mark up top for the Reign will be whether Beverly Yanez is fit enough to start or relegated to a bench role again.  Of course, the bench role worked out pretty well in the semifinal.  In her first appearance in 23 days Yanez came on as a substitute and broke a scoreless draw with her first touch.  More certain to start is Megan Rapinoe who has the ability to control the game off the left flank, and who will be in an intense chess match with Robinson and O’Reilly.  If FC Kansas City allow Rapinoe too many dangerous touches it will be difficult for the defense to keep her at bay.  If Yanez sits it means a likely start for Katrine Veje who is still looking to make her mark on the club.

For the Blues, Amy Rodriguez arrives at the final in peak form which is welcome news after she started the season slow and contributed minimally during the World Cup.  No forward in NWSL makes runs as dynamic as Rodriguez and when her finishing is on, it makes her extremely difficult to keep in check over 90 minutes.  If Kansas City go with two strikers the second one will probably be Sarah Hagen, who seems to thrive among the great players more so than she did while trying to carry the load during the World Cup.

If Yanez does not start she is far and away the most dangerous player off either bench.  Hagen is probably next in line but has not been nearly as consistent yet as Best XI member Yanez.  Veje is less of a threat if she sits behind Yanez.  The Reign also have Elli Reed who has been able to show off her versatility as a player off the bench.  Reed can add some attacking punch in midfield but can also be called on to help batten down the hatches if the Reign are ahead late.  Mariah Bullock’s brief appearance in the 2014 final was an energetic one that nearly forced extra time.  Danielle Foxhoven has seen less playing time in recent weeks.

The FC Kansas City wild card is Shea Groom.  She is on the comeback trail from a broken foot that took her out of the discussion for Rookie of the Year.  She has only played twice since returning so it could be something of a risk to put her into a championship game situation.  Averbuch has played more of a defensive role including taking Sauerbrunn’s place during the World Cup.  She has also scored on two free kicks this season and hit the decisive penalty in the 2011 WPS Championship.  Hagen or Laddish, if bench players, and Frances Silva, are all capable of contributing.

Key player for the Reign

When the Reign lost Nahomi Kawasumi and Sydney Leroux, Laura Harvey placed her faith in Beverly Yanez to pick up some of the scoring slack.  Yanez responded in kind and wound up on the Best XI.  Although the Reign are more than capable of getting goals out of their midfield, a sharp Yanez—whether starting or off the bench—will be key in flipping the result of last year’s final.

When Heather O’Reilly is making things happen on the right flank it about doubles the effectiveness of the FC Kansas City attack.  It opens up space for Lauren Holiday in the middle and Erika Tymrak on the left side and stretches out opposing defenses.  If O’Reilly gets time and space on the ball FCKC will be tough to beat.

How it will play out?

I am expecting an aesthetically pleasing battle filled with all the makings of a first-rate final.  Both midfields are too good not to create chances while both back lines are too good to get run over.  Assuming neither side lost its edge during the extended break, they are both playing their best soccer of the season.  No NWSL playoff match has ever been decided on penalties—only one has gotten beyond 90 minutes—but my prediction is that run ends here.  Once there, Solo will come up big for the defining moment of her club career and the Reign will prevail by the narrowest of margins.